To be the hero of the Divas Division

Becky is known to have played as mostly a hero character, but she also played as a villain once.

Becky appeared to save Bayley from an in-ring post-match attack from Sasha, only to attack Bayley from behind, turning Becky into a villainess. Since her betrayal, the evil Becky has aligned with Sasha and assisted her in bullying Bayley and fighting against her and NXT Women's Champion Charlotte. Becky defeated Bayley on more than one occasion in recent episodes of NXT, and she has blamed Bayley for her not winning the NXT Women's Championship at NXT Takeover: Rival. Becky was defeated by ally Sasha Banks in the Fatal Four Way match, which also included Bayley and Charlotte, and on the April 1 edition of NXT, Becky declared that she's going after the title, even though Sasha is the champion.On the April 22 episode of NXT, Lynch won a triple-threat match against Charlotte and Bayley to become the #1 contender to the NXT Women's Championship. Lynch received her championship match against former ally Sasha Banks at NXT TakeOver: Unstoppable, but she failed to capture the title; Due to her relentless nature of not giving up on trying to claim the belt, the crowd gave Lynch a standing ovation after the match and sung her theme song as she emotionally looked on, turning her back into a babyface.

Lynch made her official main roster debut on the 13 July 2015 episode of Raw, as a face, along with Charlotte and Sasha Banks, after Stephanie McMahon called for a "revolution" in the WWE Divas division. While Lynch and Charlotte allied with Paige, who was feuding with Team Bella (The Bella Twins and Alicia Fox), Banks would ally with Naomi and Tamina, leading to a brawl between the three teams. The trio of Lynch, Charlotte and Paige originally dubbed "Submission Sorority" was renamed to "Team PCB", after the first–name initials of each wrestler. Lynch made her in–ring debut on the July 20 episode of Raw, where she and Paige lost to Sasha Banks and Naomi, and was able to earn her first singles victory, over Brie Bella, on the 28 July episode of Main Event.The three teams ultimately faced off at SummerSlam, in a three team elimination match, where Lynch pinned Brie Bella to win the match for PCB.

On the November 30, 2015 episode of Raw, Lynch lost to Charlotte in a non–title match, after she faked a knee injury and her father distracted her, and three days later on SmackDown, Charlotte cost Lynch a match against Brie Bella.

On the January 4, 2016 episode of Raw, Lynch faced Charlotte in a non-title match, and was able to earn victory after she pinned her with a roll-up. After the match, Charlotte attacked her from behind, turning her villain again.

Lynch went on to challenge Charlotte for her Divas Championship three days later on SmackDown, and at the Royal Rumble on January 24, but lost both matches after interference from Ric Flair. 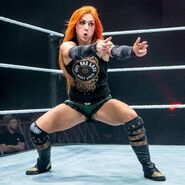 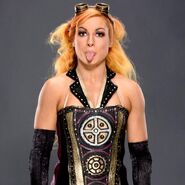 Add a photo to this gallery
Retrieved from "https://hero.fandom.com/wiki/Becky_Lynch?oldid=1772919"
Community content is available under CC-BY-SA unless otherwise noted.