Kill Cole (abandoned, failed)
Save Cole and Phoebe from Melanie and the cult (succeeded)

Bee is the titular main antagonist turned anti-hero of The Babysitter film series. In the first film, she started off as an antagonist, and in the second film, she has reformed to save Cole and Phoebe from her fellow cultist. She is Cole's babysitter in the beginning of the first film. In secret, she was a Satanist who made a deal with Mephistopheles to get whatever she wanted in exchange for the lives (and possibly souls) of innocent people. After being defeated by Cole, she returns two years later in the sequel to save him and Phoebe, a girl she had once babysat for and made a deal with Mephistopheles to save in exchange that she serves the demon.

She was portrayed by Samara Weaving, who plays Grace Le Domas in Ready or Not, Nix Degraves in Guns Akimbo, Melanie Cross in Mayhem, Thea Preston in Bill & Ted Face the Music, will portray Scarlett in the upcoming film, Snake Eyes: G.I. Joe Origins, and voices Batty in 100% Wolf.

Not much is known about Bee's background, but she states that she use to feel small and scared, and became a babysitter for the Atwell's daughter, Phoebe. Bee accidently got the Atwell's caught in an car accident, which killed the parents but Phoebe was at near death, leaving Bee devastated. She was then approached by Satan, and made a deal with the demon to save Phoebe's life, but was bound to serve the demon. Bee was tasked by Satan to recruit several people into a cult and to perform rituals of taking virgin blood to become immortal and powerful, and managed to recruit high school students Max, Sonya, Allison, and John. Bee would later meet the Johnson family, and became the babysitter for their son Cole.

Bee decides to perform the ritual with Cole, and has her fellow cultist come over to the Johnson's home to complete the ritual with Samuel. After taking Cole to bed, Bee and the group play truth or dare which ends with Bee killing Samuel after kissing him and has the others collect his blood. Unbeknownst to the group, Cole witnessed the event and attempts to call the police, but falls unconscious due to losing blood from Bee's needle. Tying him to a chair, Bee and the group interrogate the child on how much he saw, and attempt to persuade Cole that they were working on a science project. Bee at first thinks they've convinced Cole of their lies, but she quickly realizes that he knows more than he let on when the police arrive. While dealing with the cops, Cole manages to escape and accidently kills John while running upstairs, much to Bee's anger. She then orders Max and Sonya to capture Cole so they can complete the ritual, and proceeds to clean up the crime scene to get rid of the evidence.

After cleaning up the evidence, she collected the shotgun from the police car and proceeds go after Cole, but learns that both Max and Sonya have been killed. Bee looks for Cole around his friend Melanie's home, and later saves Cole's life by killing Allison with the shotgun. When Cole threatens to burn the Devil's book, Bee explains that she made a deal and attempts to convince Cole to join her cult. Cole refuses and burns the book, and Bee attempts to put out the flames while Cole uses Melanie's dad's car to drive into his home. Bee is injured by the car crash, and hears Cole tell her about his intergalactic dream team, and that he also loved her before leaving. Though heartbroken at Cole's words, she managed to escape and presumably kills the firefighter that enters the home.

Two years later, Cole is thought to be crazy as no one believes the events of the night at his house while Cole remains obsessed with Bee. Bee's friends return and attempt to perform the ritual again, joined by Cole's friend, Melanie though there is initially no sign of Bee herself this time.

As the ritual gets underway, Bee emerges from a nearby lake and is revealed to be both behind the events of the night and the former babysitter of Cole's new girlfriend Phoebe. When Phoebe was a young girl, they were both in a car accident that Phoebe was thought to be the only survivor of. In reality, Bee made a deal with the Devil to save the young girl. After collecting the needed blood, Bee's friends drink but begin to melt as Cole is no longer a virgin due to having sex with Phoebe. Only Bee is spared because she doesn't drink the blood.

In the aftermath, Bee is revealed to have set up the entire thing to save Cole and Phoebe, purposefully bringing them together by manipulating events. Though Bee wasn't sure it would work, she reminds Cole that she had always told him that when the right girl came along, she would appreciate his weirdness and that getting what you want without working for it is ultimately unrewarding. Bee remembers Cole telling her that he loved her two years before and states that he had changed her for the better that night. However, they aren't all safe yet. Their conversation is interrupted by Cole's father who is surprised to see Bee and she tells him that he had raised a fine young man.

Turning back to Cole and Phoebe, an emotional Bee tells them to take care of each other. Taking the chalice of blood, Bee explains that the ritual has winners and losers, "you or them" and that there can be no draw, they must defeat their demons or die. Bee reminds them that there is one demon left that must die for them to be truly safe: her. As Cole desperately pleads with her, Bee drinks from the chalice of blood, dooming herself to save Cole and Phoebe. Crying, the three exchange goodbyes with Cole and Bee doing their finger touch one last time. Bee backs away and is surrounded by a maelstrom of sand. Bee burns away into nothing and the maelstrom vanishes. Having witnessed Bee's demise, Cole's father finally believes about what had happened and no longer thinks that he's nuts. 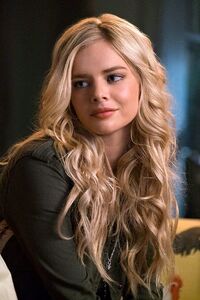 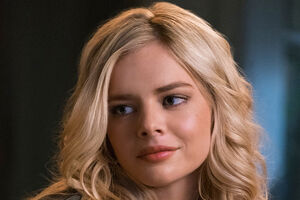 Bee in The Babysitter: Killer Queen.