Adaptational Heroism
Beelzemon is a supporting protagonist from the anime Digimon Fusion. He is the reincarnation of Reapmon as an aloof warrior possessing terrifying destructive power. As Reapmon, He is a Demon Man Digimon known as the "Mysterious Assassin"

He is voiced by Matthew Mercer also voices Levi Ackerman from Attack on Titian and Yamato from Naruto Shippuden.

He wears a white cloak covered in paper amulets, and his overall appearance combines elements from Wizardmon and Beelzemon.

In his Later form known as Beelzemon, is the reincarnation of Reapmon as an aloof warrior possessing terrifying destructive power.

Although he is seen as having a calm personality as a result of his indifference to strangers due to his taciturnity, in actuality, he loves conflict more than anyone else. He is considered one of the strongest Digimon, and anyone who sees his figure and still challenges him to a fight is nothing but a fool. Also, Beelzemon will never run away from a battle he was challenged to. There are more than a few opponents that were defeated by his "Death the Cannon", but he must exercise further caution in its use. He wields the gigantic "Berenjena SDX" (Esp: Eggplant SDX) gun on his right arm, and the "Berenjena" (Esp: Eggplant) in his left.

After the Sandoria goddess gives him his new form and power, Beelzemon aids the Fusion Fighters in destroying HiMachineDramon before joining the group. However, Beelzemon travels outside the group and his appearance is signified by a black feather coming to view. Coming to their aid when they are attacked by GuardiAngemon, Beelzemon tells Mikey to digifuse him onto Shoutmon X4 to form Shoutmon X4B. 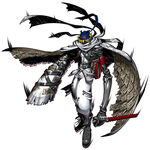 Retrieved from "https://hero.fandom.com/wiki/Beelzemon_(Digimon_Fusion)?oldid=2201943"
Community content is available under CC-BY-SA unless otherwise noted.