To help, guide and guard all those favored by the Almighty One

Belldandy (ベルダンヂィー Berudandi) is a goddess (what the anime/manga calls angels) from Heaven and the title character of the Oh! My Goddess series. She first appeared to Keiichi Morisato to grant him a wish. His subsequent wish, "I wish for a goddess like you to stay by my side forever", binds Belldandy to Earth and subsequently sets off the main plot of the series.

Belldandy is a Heaven-born angel who ends up contractually bound to Keiichi Morisato after he accidentally dials the Goddess Relief Office. Ever since, Belldandy lives with Keiichi at the Tariki-Hongan Temple in Nekomi City, Chiba Prefecture (near Tokyo). She actually has the power to cancel the contract at any time, but she won't, saying Keiichi is a special person in her heart and that her purpose is to make him happy.

Belldandy is kind, patient, and warm, not only to Keiichi but to everyone without exception. She can easily sense other people's emotions, and tries her best to be empathetic to all those around her. However, even though Belldandy tries her best to be as kind as possible, it is revealed that she's actually incredibly insecure about her own emotions, particularly if it involves Keiichi in any way. If she sees any human girl pursue him, she'll become jealous and her subconscious rage will precipitate a power-leak that affects everything in the immediate vicinity, referred to as a "jealousy storm"

Belldandy is an angel born in Heaven, and as such is highly skilled. Her power is so great, in fact, that she is required to wear a special earring on her left ear that constantly seals the full brunt of her magical strength.

Belldandy as seen on the 1996 calander

Belldandy in a white dress 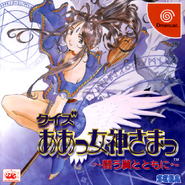 Belldandy as she appears on the Sega Dreamcast game Quiz Ah! My Goddess - Stay With Fighting Wings

Belldandy granting a wish as seen in the 1990's anime

Belldandy as a child as seen in the 1990s anime

Retrieved from "https://hero.fandom.com/wiki/Belldandy?oldid=1959060"
Community content is available under CC-BY-SA unless otherwise noted.