Experience adventure and life beyond her poor, provincial town (succeeded)

Belle is the female protagonist of Disney's remake of the 2017 film, Beauty and the Beast.

Belle was born to Maurice and an unnamed woman, when she was still an infant, her mother was infected by the plague and died from it, forcing Maurice to take Belle and flee Paris for safer havens, as she was unaware of how her mother died; something that she would not discovered for many years.

Belle is a young woman who lives in a provincial town with her father, Maurice. She is also the love interest of a hunter named Gaston, though she doesn't like how he behaves. One day, Maurice gets lost in the woods and ends up being trapped in the Beast's castle. Belle then comes to rescue him, and offers to stay with the Beast. During this time, she gets to know the Beast, who becomes nicer as the time progresses.

Later, Belle and the Beast dance together while the song "Tale As Old As Time" is played. But then, she comes to her father, who is sick. Meanwhile, Monsieur D'Arque takes away Maurice because of the town thinking of the latter being insane, but Belle comes just in time to prove that her father sane and the Beast exists. When she shows the Beast to the frightened town, saying that he is kind and friendly, Gaston, who wants Belle for himself, says that the Beast, to whom he refers to as the monster, put her under a spell and that she even cares for him, to which Belle says that the Beast is not a monster, and that Gaston is the monster.

Gaston, furious with Belle's answer, turns the town against the Beast and forms a mob to attack the castle, not before locking up Belle and Maurice. Luckily, the castle servants are informed and they attack the villagers. Meanwhile, Maurice manages to free Belle and himself and they rush towards the castle to save the Beast. Gaston then head to the West Wing of the castle, where he find the Beast, who is sad because Belle had left the castle, so he do not try to fight Gaston. Gaston, taking advantage of this, attacks him, but the Beast regains his will and confidence once Belle returned to the castle, and he easily overpowers Gaston.

The Beast then grabs Gaston by the neck, preparing to drop him off the tower for the trouble he caused. With his life at stake, Gaston begs for mercy, to which the Beast grudgingly obliges by coldly telling Gaston that he is not a beast. Shoving Gaston away from his sight, the Beast furiously orders him to leave the castle before climbing back on the castle balcony to reunite with Belle. However, Gaston takes a gun and fatally shoots the Beast, much to Belle's horror. However, Gaston's brief victory is short-lived, as he falls from the bridge and dies.

Meanwhile, the fatally wounded Beast succumb to his wounds and dies. Belle then breaks down and tears, saying "I love you" while sobbing over his dead body. However, a miracle happens, and the Beast is revived and transforms back into a human prince. Then, all of the castle servants transforms into humans as well. The village inhabitants return to the castle with their true memories restored and reunited with their loved ones, and the Prince and Belle are married and host a ball for the kingdom at which they dance to celebrate the couple's wedding.

Despite Belle's polite, respectful and well-mannered traits, she can sometimes be impulsive and outspoken; to the point of being unintentionally rude and discourteous. 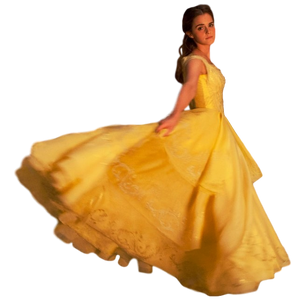 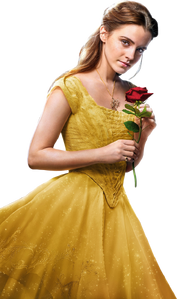 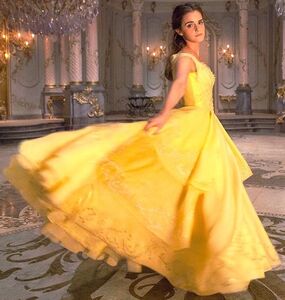 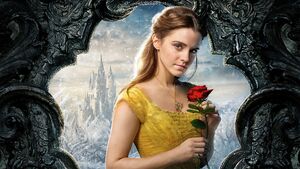 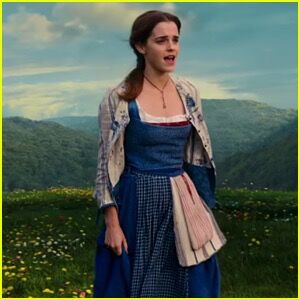 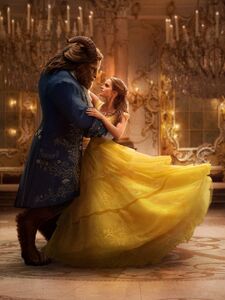 Belle's first appearance as she walks into the village.

"There goes the baker with his tray like always."

Belle buying bread from the baker.

"There must be more than this provincial life."

Belle meeting with the village's librarian.

"Your library makes this small corner of the world so big."

Belle bidding farewell to the librarian after borrowing a new book.

"But she won't discover that it's him til chapter three."

Belle being greeted by the town hero, Gaston.

When offered a bouquet of flowers, Belle politely turns down having a date with Gaston.

Belle returning to her cottage.

Retrieved from "https://hero.fandom.com/wiki/Belle_(2017)?oldid=2248133"
Community content is available under CC-BY-SA unless otherwise noted.