Protector of the barn


Playing his guitar
Defending the barnyard from the coyotes

Protect the hens from being taken by Dag (succeeded with the cost of his own life).

Save all the animals from Dag (succeeded indirectly).

Ben is a posthumous character from the movie Barnyard. He was the adoptive father of Otis and the leader of the animals at the farm when the farmer wasn't around but would wish for Otis to mature and eventually succeed him.

He was voiced by Sam Elliott.

Ben was noble, confident, overprotective, strict, tough, courageous, fatherly, serious, and did not have much fun, unlike his son Otis. Because of his fun personality, Ben had a talk with Otis in the Barnyard and demanded he grow up someday since he was to eventually become the new leader, as he was sick of Otis letting him down and goofing off all the time. However, the two truly loved and cared for each other and had a strong father-son bond.

Whenever the Farmer would go away, Ben would fill in and continue to run the Barnyard himself as its leader. He had a friendly relationship with Miles, whom he had been best friends with since childhood.

When Ben sacrifices himself to protect the chickens from the coyotes, this proves how devoted and loyal he was to the other animals. Before he dies, he opens his mouth as if he was trying to say something, but can't say anything.

Ben was best friends with Miles for their whole lives and Ben used to think he wasn't going to live up to anything, but he found Otis and took him in as his own son. Since then, he vowed to protect the other animals.

One day, Ben came across the chickens home and saw Dag and his coyote pack preparing to kill some of the chickens. A fight starts between Ben and the coyotes and during the battle, he is bitten in the leg by Dag but still fights on. He is successful at forcing Dag and the coyotes to retreat but is fatally wounded and eventually dies in Otis's arms. He is then buried by the Farmer with his gravestone say "Ben, A Good Cow".

His death is eventually avenged by Otis at the end of the film where he defeats Dag and the coyotes and becomes the new leader of the farm animals. 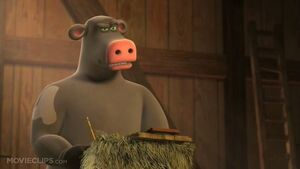