Ben (Song of the Sea)

Song of the Sea

Drawing characters from his mother's stories

Save the fairy world and find Saoirse (succeeded)

Ben is the main protagonist of the 2014 Irish animated film Song of the Sea. He is 10, going on 11, and is the only son of Connor and Bronagh, the owner of Cu and the older brother of Saoirse.

At the beginning of the film, Ben is 4 and looking forward to becoming an older brother as he paints a silkie-theme mural with his mother Bronagh. As Conor and Bronagh put Ben to bed, Bronagh gives Ben a seashell horn that is a keepsake of her own mother's. Unfortunately, Bronagh suddenly goes into Labor and leaves a bewildered Ben calling after her.

After the prologue, it is implied that Ben never saw his mother again but did gain a younger sister named Saoirse. Believing Saoirse's birth to have caused his mother's "demise" and because she receives the most attention from their father, Ben, fearing he would lose his daughter, tosses her sealskin into the sea.

On Saoirse's 6th birthday, Ben, out of jealousy spoils the proceedings by shoving his sister's face into her cake. After Conor sends him to his room, he tells her a scary story about Macha the Owl Witch with the implication that he doesn't love her.

After Saoirse is caught swimming with seals late at night, Ben is crushed as their father sends them away to live with their grandmother in the City, even if it means parting with his sheepdog, Cu. Ben immediately hatches a plan to run away back to the Lighthouse and makes his escape as soon as his grandmother isn't looking. He has no intention of bringing Saoirse with him however and tries to send her away when he catches her following him but gives in on the condition that she listens to him and stays where he can see her.

Before long, Ben and Saoirse are abducted by a trio of Daoine Sidhe (faeries) who reveal to Ben that Saoirse is a silkie and they need her to sing the titular song to save them from Macha the Owl Witch. Since Saoirse is mute, Ben has to speak for her and confesses he knows what's going on thanks to his mother's stories as well as the whereabouts of Saoirse's selkie coat which she needs to find her voice. Ben and Saoirse are promptly found and attacked by Macha and her owls but Ben manages to rescue Saoirse and escape. Ben and Saoirse attempt to return home, initially by bus but they end up at odds over following the faerie lights or Ben's makeshift map and become lost in the countryside until Cu arrives, having attempted to follow them to the City. Ben instructs Cu to lead him and Saoirse home but it starts to rain and Saoirse becomes ill so Ben has to carry her to a Holy Well for shelter.

While Ben is contemplating continuing their journey home, Saoirse jumps down the well. Ben is torn between going after her and his fear of water but is pulled in by Cu and loses him when his leash breaks. Ben searches for Saoirse and Cu in a boat with only the faerie lights to guide him and eventually encounters the Great Seanachai who tells him that Saoirse has been captured by Macha and will die unless she is reunited with her selkie coat. Ben follows a trail of the Great Seanachai's hair to Macha's home. Along the way, Ben learns his mother was also a selkie and had to return to the ocean when Saoirse was born, he is ashamed of the way he's treated his sister.

Ben finds Macha's house and confronts her, nearly getting himself turned to stone but he tags on just in time and flees to Macha's attic where Saoirse and Cu are. With Cu holding off Macha, Ben tends to Saoirse who is increasingly ill and turning to stone. Ben apologises to Saoirse and gives her the shell horn and urges her to play the selkie song on it, destroying Macha's jars and releasing Saoirse. Ben appeals to a regretful Macha to help him get Saoirse home and she obliges by sending Ben, Saoirse and Cu home on her son Mac Lir's dogs. Once they are back at the Lighthouse, Ben dives into the ocean to retrieve Saoirse's selkie coat as their father threw it in there, succeeding with help from the seals whom Saoirse swam with earlier. 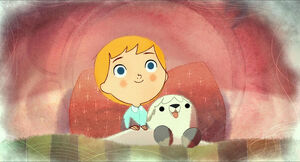