He was portrayed by Cuba Gooding Jr. as an adult, Gus Hoffman as a teenager, and Jaishon Fisher as a child.

In 1987, Dr. Ben Carson travels to Germany to meet a couple, Peter and Augusta Rausch, who have twins conjoined at the back of their heads. Dr. Carson believes he might be able to successfully separate them, but realizes that he also risks losing one or both of them. After explaining the risk, and despite that fact, Ben agrees to operate.

During the four months he spends researching and formulating a plan to increase his chances of a successful surgery, the movie flashes back to 1961, when Ben is failing school. His single mother, Sonya Carson, who had but a second grade education, is distressed about her sons' academic failures and decides to do something about it. First she requires Ben and Curtis, his best friend and his brother, to learn the multiplication tables while she was away and, unbeknownst to them, checks into a mental institution to battle depression. When she returns, she realizes that her sons are watching too much television and decides to restrict them to two shows a week and require them to read two books a week and write book reports. She hides from them the fact that she does not know how to read the reports.

Ben and Curtis soon begin to love reading and learn many things from the world of books, so that within one year Ben goes from the bottom of his class to the top. But Ben has an uncontrollable temper which climaxed in high school when he nearly killed his best friend Bob. Fortunately for Bob and for Ben, his knife hits Bob's belt buckle and breaks (which could not stab Bob). Shocked, Ben runs home and cries out to God to take away his temper. This experience changes his life. He never loses his temper again.

After hard work and strong determination, Ben receives a scholarship to Yale, where he meets his wife, Candy, who supports him in his struggles to get through Yale. After studying neurosurgery; the medical specialty concerned with the prevention, diagnosis, treatment, and rehabilitation of disorders which affect any portion of the nervous system including the brain, spinal cord, peripheral nerves, and extra-cranial cerebrovascular system, he is accepted as a resident at John Hopkins Hospital, where he is faced with a dilemma that could end his career; operate on a dying man without permission or supervision, or let him die. He takes the dangerous risk and saves the man's life.

In 1985, after Sonya joins the family, Candy is rushed to the hospital where she miscarries their twins. Dr. Carson stays with her all night until the next morning when he does a very rare surgical procedure, a hemispherectomy, in which he removes half the brain of a 4-year-old who had been convulsing 100 times each day.

The movie then returns to where it began in the year 1987, when Dr. Carson is preparing for a risky surgery to separate the twins conjoined at the head. With four months nearing an end, Ben still cannot figure out one final component of his plan. Sonya encourages him that he can save the twins. Then he gets an inspiration and confidently prepares for the operation. After about 22 hours into the procedure, Dr. Carson and his team of doctors manage to separate the baby twins, saving two young lives. He tells the emotional, appreciative, and grateful Peter and Augusta that the surgery was a success. The film ends with him surrounded by cameras and microphones in a press conference.

Ben Carson sitting on the couch with Curtis Carson 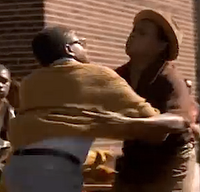 Retrieved from "https://hero.fandom.com/wiki/Ben_Carson?oldid=2084169"
Community content is available under CC-BY-SA unless otherwise noted.