Protecting his loved ones

Benjamin "Ben" Reilly, also known as the Scarlet Spider, is a fictional character in the Marvel comics and universe and is the second Spider-Man, and Spider-Carnage. He is a clone and ally of Peter Parker (Spider-Man) and is prominent in the "Clone Saga" story arc.

He was created by Gerry Conway and Ross Andru and first appeared in The Amazing Spider-Man issue 149 in October of 1975.

Created from Peter Parker's DNA by the Jackal, this clone was made to fight him as part of Jackal's torment to Spider-Man, blaming him for Gwen Stacy's death. In the fight, only one could survive in order to save Ned Leeds from a bomb. When the Jackal had an eye-opener and freed Ned, activating the bomb, seemingly dying and killing the clone. Spider-Man got the corpse and buried at an industrial chimney, but he was alive and managed to survive.

Then, the clone spent the next five years in exile from New York, believing himself to be a worthless clone. He dubbed himself "Ben Reilly", using his Uncle Ben's first name and his Aunt May's maiden name, Ben Parker and May Reilly respectively.

During this time Ben began working as a janitor in a Portland high school using the alias "Henry Jones". There, he rescued a woman from home invaders. He thought of himself as a worthless clone until he met a friend, Seward Trainer, who inspired him with confidence to be his own person. Returning to New York when he found out about Aunt May's failing health, Ben came face-to-face with Peter and had to explain his reasons for returning.

After initial distrust of each other, they became friends and worked side by side as Spider-Man and the Scarlet Spider, until after some tests by Seward Trainer, it was revealed that Peter was the clone and Ben had been the real Peter Parker. This drove Peter almost insane and left Ben stunned. They agreed to keep their names since Ben still didn't feel like he deserved the name.

Peter soon gave up the webs when he found out that Mary Jane was pregnant, allowing for Ben to become Spider-Man. Ben enjoyed life as Spider-Man and had his own adventures, but meanwhile, Peter was getting suspicious over the results that he was a clone. He began delving into Seward Trainer's past in order to find out if he was to be trusted. Eventually, it was revealed that Trainer was working for Gaunt and Norman Osborn. Norman had survived the glider to his chest all those years ago and created the whole clone saga in order to drive Peter mad.

During a confrontation between the Green Goblin and the two Spider-Men, Norman impaled Ben Reilly with his glider and Peter watched as he seemingly disintegrated away, proving that Ben was the clone all along.

As Spider-Man's clone, Ben Reilly possesses powers identical to Peter Parker's, including superhuman strength, speed and agility, and the ability to cling to any surface. At the time of his death, he also has a precognitive "spider-sense" that warns him of danger. Reilly's reflexes operate up to 40 times faster than those of a normal person, while his strength allows him to lift 150 times his own weight, although he has lifted much more. Because Reilly was not in the role of Spider-Man for five years while traveling, his fighting style is less polished than that of Parker's. However, as per the "Spider-Man Encyclopedia",[citation needed] Reilly seems to enjoy fighting more than Parker. In addition, he also possesses Peter Parker's genius-level scientific intellect.

In the five years that Ben Reilly traveled the United States, he made improvements over Parker's original web-shooters. Reilly's web-shooters still had triggers on the inside palm to fire a web-line. However, three new weapons were designed. When using a twist of the wrist on the shooters, impact webbing is fired out as miniature web-pellets that explode on contact, encasing a target within a web cocoon and rendering him or her virtually immobile. Stingers are small, diamond-shaped darts coated with a paralyzing chemical agent to incapacitate opponents. Mini-dot tracers are shaped like miniature Frisbees, and smaller and lighter than Parker's spider-tracers (at 1/4" of their size), which are much faster when fired from his web-shooters. Because of Reilly's web-shooters are bulkier than Peter Parker's as the result of the modifications, he wears them on the outside of his costume. Like Parker, Reilly also wears a belt that contains spare web cartridges should he need replacements. 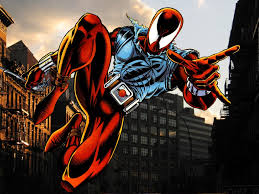 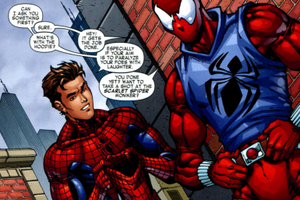 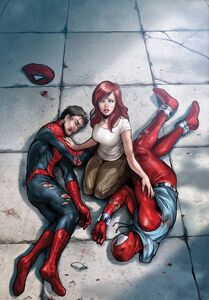 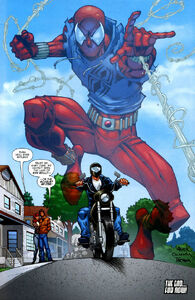 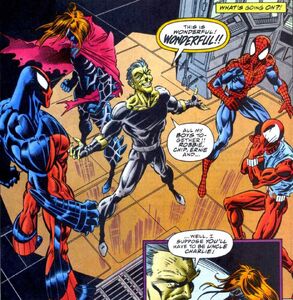 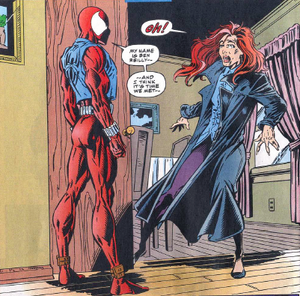 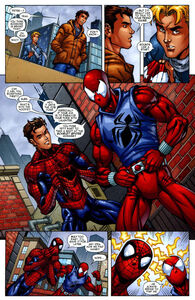 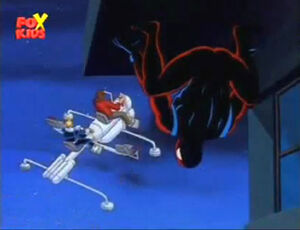 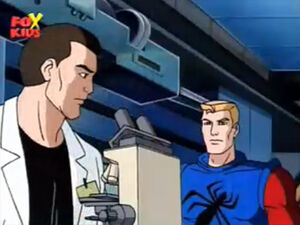 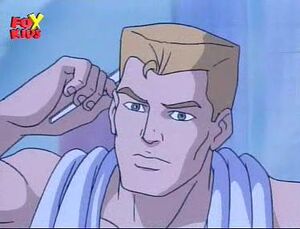 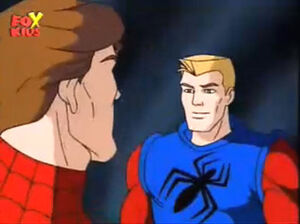 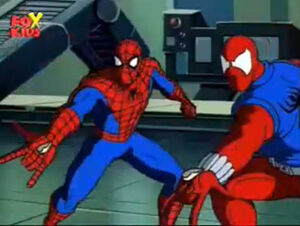 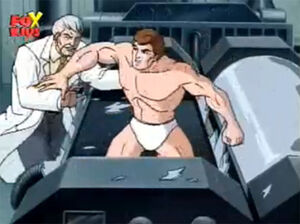 Retrieved from "https://hero.fandom.com/wiki/Ben_Reily?oldid=2009393"
Community content is available under CC-BY-SA unless otherwise noted.