He is a teddy bear who in the films, is owned by a boy named Simon who lives with his parents and younger sister Sally, who has a teddy of her own named Wally, who serves as Ben's best friend.

In The Secret World of Benjamin Bear (which takes place many years after the films), Ben is now the teddy of Simon's son Max. Also in this series, he is best friends with a teddy named Howie, who is owned by Max's sister Eliza.

A true gentleman, Ben is very kind, sweet and gentle to his friends. He is a very wise bear who will stop at nothing to do the right thing no matter what the cost. He is allergic to lavender. When he is angry, he will cross his arms and tap his foot. He has a crush on his friend, Ruby Red who has the same feelings for him.

Ben is voiced in all his appearances by the late Jonathan Crombie.

Ben in The Teddy Bears Picnic

Ben in The Teddy Bears' Christmas

Ben with his best friend Wally 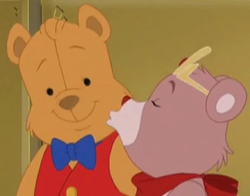 Retrieved from "https://hero.fandom.com/wiki/Benjamin_Bear?oldid=1693755"
Community content is available under CC-BY-SA unless otherwise noted.