To borrow some vegetables from Mr. McGregor

He is voiced by Colin Moody.

He is a light brown bunny and wears a brown coat. He weighs about 2 stone and has chubby cheeks.

He is clumsy, clueless and a bit of a coward. In spite of this, he is quite loyal to those he cares about. As he accompanied Peter to London to retrieve Thomas despite initially being mad that his recklessness caused the destruction of their burrow.

Benjamin and his cousins spend most of their days picking on Mr. McGregor and stealing his vegetables from his garden. They are friends with a local woman named Bea who spends her time painting pictures of the rabbits as well as the surrounding nature.

Peter invites all of the woodland critters, and then takes over the now late McGregor's old house. When Mr. McGregor's nephew Thomas kicks out Peter and his friends and begins to secretly wall up the garden, despite Bea's objections.

When Peter and Benjamin sneak back into the garden, Thomas catches the latter and attempts to drown him. Peter and the triplets rescue him and Thomas accidentally tosses the binoculars that Bea had given him earlier.

Peter and Benjamin head to London and finds Thomas at the store. They make up and rush back to the country where Peter reveals that he had activated the detonator, and he and Thomas apologize to Bea for their fighting.

Peter and his friends use their tricks to kick the couple out of the house.

During the end credits, it is shown that Bea, Thomas, and the rabbits eventually moved to London together where Thomas has his own toy shop and Bea begins to write and illustrate books based on Peter and his friends. 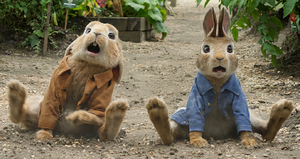