Benny the Cab is a supporting character in Who Framed Roger Rabbit. He is portrayed as a gruff, outspoken, middle-aged character. He is voiced by Charles Fleischer who also voiced Roger Rabbit in the film.

He first appears when Eddie Valiant and Roger Rabbit escape from Judge Doom and the Toon Patrol in the bar, and then encounter him locked up in the Toon Patrol's paddy wagon for driving on a sidewalk. They free him, and he helps them get away, taking them to a theatre to hide out. He later appears when Eddie and Jessica Rabbit are trying to flee from the Toon Patrol, and again tries to help them out, but this time Judge Doom spills Dip across the road Benny drives along, injuring him and making him skid off into a pole. After Eddie and Jessica are taken hostage, Benny lies still, recovering, and joins up with Roger when he happens by in Eddie's car, taking over the job of driving, and explaining to Roger what's just happened. He drops Roger off at the Acme factory, and drives off for help. He is last shown at the end of the film, in the Acme factory, listening with Dolores, Lt. Santino, and some human policemen about what Eddie found out about Judge Doom, and rejoicing over the discovery of Marvin Acme's will. 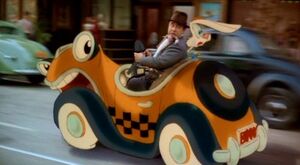