Cleaning
Managing
Hanging out with his employees

Benson Dunwoody is a high-tempered gumball machine and is usually an on & off anti-villain, and tritagonist/anti-hero of the Cartoon Network show. Regular Show.

When calm, he sounds almost monotone, but when mad, he turns red and screams in an ear-bleading way. He cannot stand Mordecai and Rigby's irresponsible behavior, and threatens to fire them. Next to Skips, he is also the only serious worker of the park, although he still seems to have a sense of humor.

Despite his disapproval of Mordecai and Rigby, he still considerably likes them, as he has invited them to special celebrations, and most notably in the episode Stick Hockey, he risked himself to help the two. He also admitted the two were cool in Cool Bikes helped saved them from the cool police, and in Eggscellent, after Benson helps Mordecai train for the omelte challenge, Mordecai tells Benson that even though he acts like a jerk, he's a true friend. In Think Positive, while he's yelling at Mordecai and Rigby after pops finally allows him to, he mentions he's trying to teach them responsibility. From that point, he also promised to yell less of the time. He has also admitted he does not hate Mordecai and Rigby, just some of the things they do.

Benson is a gumball machine with pinkish purple/red gumballs enclosed by a glass dome and sunken eyes. The gumballs may act as facial hair for Benson, as noted by story boarder Benton Connor. It is also worth noting that the dispenser slot sits in a rather phallic position. The turn switch on his chest is shaped like a heart symbol, hinting that's probably where his heart is. When his latch is open, it is considered to him being naked, as well as his private area.

Benson is easily the most short-tempered character of all. Whenever he is greatly upset (usually

in the form of Mordecai and Rigby slacking off), Benson loses his temper, turning varying shades of red. He'll even make big deals out of the smallest of things. Aside from this, Benson is usually calm, and in fact, enjoys being social, even with his two most disliked people. Whenever Benson is in a good mood (which happens more often after the episode Benson Be Gone), Benson rewards his employees with time off, usually in the form of nightly entertainment or dining out. Though despite his selfishness and aggressive tendencies on mordecai and rigby on blind trust he is shown that he really loves mordecai and Rigby he admits it before falling into the ground

Sore Loser - As shown in "Dodge This", Benson is very competitive, and when he loses the dodgeball tournament, he doesn't take it well. 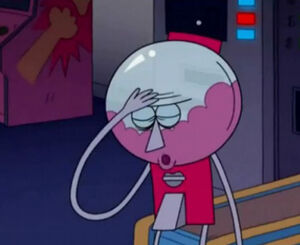 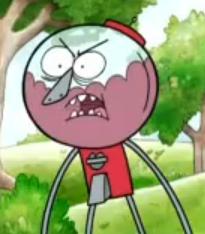 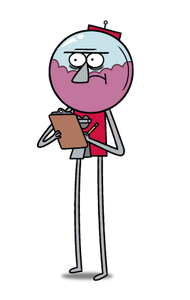 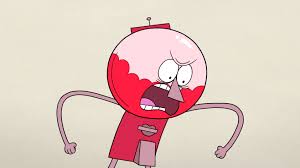 Benson punchef by Mordecai.
Add a photo to this gallery

Retrieved from "https://hero.fandom.com/wiki/Benson_Dunwoody?oldid=1790756"
Community content is available under CC-BY-SA unless otherwise noted.