Heroes Wiki
Register
Don't have an account?
Sign In
Advertisement
in: One Piece Heroes, Male, Fighters,
and 29 more

Officer of the Baroque Works (formerly)

Okama
Queen of Newkama Land of Impel Down Level 5.5

Help Luffy and the prisoners escape Impel Down (succeeded).

Bentham is a carefree and friendly okama. He has a good relationship with the Straw Hat Pirates. He is willing to risk his life to accomplish his friends' escape.

Bentham has name gags. He referred to Luffy as Straw-Boy while in Impel Down. He rudely called his old comrades from Baroque Works such as Mr. 4 as Fatty and Miss Merry Christmas as Old Hag.

The reason he wanted to become an okama was due to him idolize the greatest okama, Emporio Ivankov.

Mr. 2 is quite a formidable fighter. He is skilled in martial arts.

Mr. 2 is an expert of the okama's martial art ability called Okama Kenpo.

Mr. 2 ate a paramecia Devil Fruit called Mane Mane no Mi (Clone-Clone Fruit) originally from Kurozumi Higurashi (who was killed by Kaido). He has the ability to transform into those who he has managed to touch their face with his right hand. He can revert back to normal by touching his face with his left hand. However, his imitation ability doesn't copy strength or techniques, but it does copy bodily features of whoever he's transformed to. 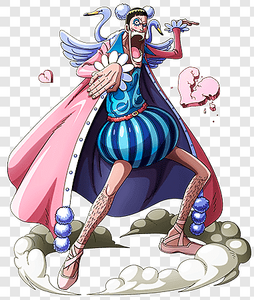