Protector of his homeland

Assist his brother in favors

Help Spyro defeat Scorch and the Sorceress
(both succeeded)

Bentley is a yeti who made his first debut in Spyro: Year of the Dragon as a playable character in mini-levels, and reappeared in Spyro: Attack of the Rhynocs and in Spyro: A Hero's Tail. His main weapon is a huge club presumably made out of crystal or ice.

After Bentley was captured by a couple of Rhynocs, he was imprisoned by the Sorceress and guarded in Evening Lake by Moneybags. After Bentley was freed by Spyro, he became mad with Moneybags and whacked him with his ice club. He then returned to his outpost and helped his younger brother, Bartholomew, to return home, before assisting Spyro in his quest.

After Bentley learns that a yeti from Avalar had stolen Bartholomew's ball, he hurried to the Frozen Altars and challenged him to a boxing match. Though he won two matches, along with the dragon eggs containing Ricco and Aly, he still did not get his brother's ball back. Bartholomew then remembered he lent his ball to one of his friends.

Later on, the Sorceress turned a rhynoc named Scorch into a flying monster in order to be the "monster to end all monsters". The Sorceress sent Scorch to kill Bentley and Spyro, but Scorch was defeated after a powerful battle, and Bentley was saved from his execution.

After escaping death from Scorch, Bentley had taken a vacation with Bartholomew in Bamboo Terrace, where they heard rumors of an egg being on top of a tower guarded by Umbrella Rhynocs. Despite their hard work to protect the egg with rocks and umbrellas, he made it to the top of the tower and retrieved the egg.

Shortly after, he also went to the Crystal Islands, because one of the gnomes was said to be a great wizard, and he wanted to see the show. However, the moles were carried away with the show, and he was able to "calm them down" using his club.

He appeared at the end of the game, where he and Spyro tried to reenact the ending of the first game in the series. However, Spyro called him a comedian, and he cracked up laughing. 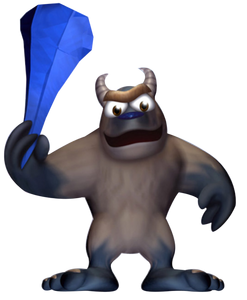