Heroes Wiki
Register
Don't have an account?
Sign In
Advertisement
in: One Piece Heroes, Pirates, Manga Heroes,
and 17 more

Bepo is a character of One Piece. He is the navigator of the Heart Pirates under Captain Trafalgar Law. He is a polar bear mink, a fact which he is apparently sensitive about.

Bepo is a white bear (possibly a polar bear as noted by the Marines), wearing a black jumpsuit after the time skip (it was orange before the time skip), which is zipped up, and bears the jolly roger of the Heart Pirates. He wears small brown boots and has sharp teeth. His size is that of a normal bear, being considerably taller than common humans.

Bepo tends to get depressed easily and apologizes whenever people talk about his appearance as a bipedal bear who can talk, for example when Hancock called him a beast and scolded him for attempting to change the subject. His crewmates also scolded him when he was wondering if Amazon Lily had female bears, much to their annoyance. Overall, members of the Heart Pirates state Bepo has a weak will. This is ironic, however, as he was able to remain conscious after taking a blast of Haki from Rayleigh, and only strong willed characters are able to withstand Haki. Those who do not know him call him meek.

He was also shown to order Jean Bart around, although unsuccessfully, since he was a new member. At the same time he also does not like to be ordered around by him. In the anime, he is shown to dislike hot environments (possibly due to his thick fur and the black/orange jumpsuit he often wears), as he complained when the Heart Pirates' submarine was near an underwater volcanic region.

Bepo is a bear who apparently knows how to talk, and is fairly strong-willed, being able to withstand a blast of Silvers Rayleigh's Haki.

He is also a martial artist with a fighting style similar in form to that of usual martial artists. He can take out several Marines with ease but when he attempted to kick a Pacifista he wounded his leg, similar to Sanji's attack on Bartholomew Kuma.

As the navigator of the Hearts Pirates, it can be assumed that Bepo has the knowledge of how to navigate the seas. The level of his skills are as yet unknown, though it is expected he is reasonably capable of navigating through the Grand Line. Interestingly enough, despite his occupation, he is not seen wearing a Log Pose, which is essential for Grand Line navigation. He also has some skill in cartography, as he was the one who drew the map of Dressrosa and Green Bit that Law shared with the Straw Hats. However, he appears to be a bit messy as the map had his paw print on it, and Nami states that his map-drawing and navigation skills are far from her own.

He was seen alongside his Captain during the Supernovas introduction and then in the Auction House with his crew. After the Tenryuubito Incident, he fought against several Marines and then escaped with Law, Jean Bart, and the rest of the Heart Pirates, to later meet the Kid Pirates in a battle against a Pacifista unit.

Bepo was with the Heart Pirates when they were watching the war at Marineford. When the broadcast was cut off, Law told his crew that they were setting sail.

Bepo appeared with Trafalgar Law and his crew in Marineford after Luffy and Jinbe were wounded by Akainu. When Buggy left Luffy and Jinbe to the Heart Pirates, Bepo carried Luffy saying that the Straw Hat captain was severely wounded and wondering if the boy was still alive.

He and the other Heart Pirates managed to elude the Admirals and escaped Marineford successfully. Out in the open sea, the crew encountered the Shichibukai, Boa Hancock. When Hancock asked the crew about Luffy's condition, Bepo complimented Hancock for being able to track the submarine. Hancock then scolded Bepo for changing the subject and referred to Bepo as "beast", which caused the bear to suffer depression. Hancock then demanded Bepo to give her a Den Den Mushi and Bepo quickly complied which did not go too well for Bepo's crew mates.

The Heart Pirates soon reached Amazon Lily and arrived at the port. While Bepo's crew mates were anxious to see into the isle of women, Bepo asked if there were female bears too and his crew mates snapped back reminding him Amazon Lily is a country of human women, causing Bepo to be depressed again.

After the arrival of Silvers Rayleigh, the Heart Pirates left Amazon Lily. Bepo's crew mates were depressed that they did not get a chance to peek into the women kingdom. Bepo stated that it would be better if they were bears, only to be told to shut up.

Bepo was then seen along with the rest of the Heart Pirates while Law was biding his time about going into the New World, though he was only sleeping and being used as a back rest by Law.

Before arriving at Dressrosa, Law revealed that Bepo and the other Heart Pirates are at a place called Zo. After their arrival, Nekomamushi took them under his care. During the Beast Pirates' invasion, the Heart Pirates assisted the Mink Tribe. They fought until Jack used one of Caesar's poison gas weapons. After Jack left and Sanji's group arrived, Bepo's injuries were tended to.

Right after the arrival of Luffy's group and Law, Bepo first appeared after the timeskip when he was trying to stop a fight between Luffy and a guardian. Bepo tried to explain that Luffy is an acquaintance, but the guardian ignored him, saying that Luffy was an intruder. After Wanda and Carrot arrived and stopped the fight, Bepo and the rest of the Heart Pirates got reacquainted with Luffy. At first, Bepo and the crew were confused about who "Tra-guy" was until Luffy clarified that it was Law. Bepo and the rest of the crew were excited to hear that Law was on Zou. As Wanda took Luffy to see his friends, Bepo explained that he could not leave the forest and asked Luffy to inform Law of his whereabouts. After Inuarashi, Nekomamushi, the samurai, and the pirates returned from the Whale Tree with Raizo, Zou started shaking with Zunisha crying, throwing everyone into a state of panic. Zou's shaking was due to Jack's assault on Zunisha upon his return. However, Zunisha retaliated and sank Jack's fleet. After the threat of Jack ended, everyone became calm again. As the Sanji retrieval team departed from Zou, everyone, except for the Straw Hat members left behind, was shocked when Luffy jumped off Zunisha with his party.

After leaving Zou, the Heart Pirates infiltrated Wano Country. On top of a mountain, Bepo, Shachi, and Penguin spotted Luffy and Zoro through binoculars as the latter two entered Okobore Town. When Luffy and Zoro were heading to Bakura Town in pursuit of a Gifter that abducted a little girl, the trio informed Law about the situation. On the way to Bakura Town, Bepo ate a fish from the polluted river and got sick, delaying Law from reaching the town. Suffering from diarrhea, Bepo hid in the bushes near the ruins of Oden Castle. Bepo was then seen lying on the ground next to Law, Penguin, and Shachi as Kin'emon told Luffy's group about Wano's past. He then witnessed Kaido's arrival to the Kuri region. After Luffy rushed off with Law following him and Kin'emon and Kiku left to rescue Tsuru, the rest tried to escape as Kaido approached the castle and destroyed it with a fire breath. Bepo and the other males in the group were saved by the kunoichi Shinobu's jutsu which sunk them into the ground. Sometime after this ordeal, Bepo worked to deliver Kin'emon's secret message to his allies. Bepo was later captured by the Beasts Pirates to be used as bait for Law. Bepo and the other captured Heart Pirates were incarcerated in the Rasetsu District Prison. Prior to Law's arrival, Bepo was linked to Hawkins before being moved to another location. Bepo, Shachi, and Penguin were released by Hawkins, who made a deal with Law for their freedom in exchange for his capture. Law ordered them not to tell Luffy about his capture. They later met up with Nami at Ebisu Town. Bepo gave her Kin'emon's secret message now drawn with two lines on the snake as Shimotsuki Yasuie's last message. After Nami left, the Heart Pirates discussed about their captain's situation.

The crew later reunited with their captain and they entered the battle with the Beasts Pirates on the day of the Fire Festival. After rescuing Kin'emon's group, the crew was shocked to hear that Kaido formed an alliance with Big Mom.

After the guards at the torii gates were defeated by the Straw Hats, the Heart Pirates and the Scabbards (except Kin'emon and Denjiro) traversed to the back of Onigashima in the Polar Tang. When the submarine got close enough, it rose to the surface and Law teleported himself, Bepo, Shachi, Penguin, and the Scabbards with them to Onigashima's back entrance. Bepo was later seen inside Kaido's castle during the all-out attack on the Beasts Pirates. 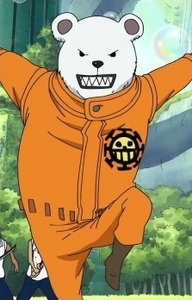