Bert is a yellow humanoid muppet from Sesame Street. His best friend and roommate is Ernie, despite most of the time he can get very annoyed by his actions. Bert is good-natured, easy-going and intelligent, but can lose his temper usually. His favorite animal is the pigeon, and he is very proud of his bottle cap and paper clip collections, and his favorite food is oatmeal. He was performed by Frank Oz who also portrays as Grover, Fozzie Bear, Cookie Monster, Animal the muppet, and is currently performed by Eric Jacobson.

Bert, though kind and intelligent, is also grumpy, boring, and easily frustrated. His catchphrase is "Yes, I do mind!" He enjoys activities such as paper clip and bottle cap collecting, cooking oatmeal and watching pigeons. Producer Arlene Sherman has called Bert "everyone's idea of a blind date".[2] In one sketch, Bert reads a book called Boring Stories and chuckles, "Wow! These boring stories are really exciting!" In the book Sesame Street Unpaved, Frank Oz says, "I was never really happy with Bert's character until about a year in, when I realized... that he was a very boring character, and I'd use that weakness as a strength for him."

Bert has very boring foods as his favorites. He loves oatmeal, unflavored soda water, and other bland related foods. In one episode when Ernie is hired to sub for Mr. Hooper, he gives Bert a glass of unflavored soda water but adds syrup, ice cream and whipped cream to it, angering Bert who eventually screams a memorable phrase: "I hate ice cream sodas!" Bert's appearance and clothing contrast markedly with Ernie; he is the taller and thinner of the two, wears a turtleneck under a shirt with vertical stripes (as opposed to Ernie's horizontal ones), and has a head that is narrower than it is high and is shaped like a banana. In addition, Bert has visible eyebrows (actually a unibrow), while Ernie does not.

Bert has a pigeon named Bernice, and he created a dance called "Doin' the Pigeon". In one sketch, Bert gets dressed and says he is going to a pigeon lovers party, which is obviously hosted by himself. Bert serves as President of the National Association of W Lovers, a club dedicated to the letter W. Two conventions held by the W Lovers have been shown on the show. Bert has pet goldfish, two of whom are named Lyle and Talbot.

In Christmas Eve on Sesame Street, Bert decides to get Ernie a soap dish for Rubber Duckie so it will not fall in the bathtub anymore and sink, but has no money. He offers Mr. Hooper his paper clip collection as a trade but sadly walks off afterward. Then Ernie decides to trade Rubber Duckie for a cigar box for Bert's paper clips. Mr. Hooper however can see by their sad expressions that they do not want to give up their possessions so he gives them back to them as gifts and lets them keep the cigar box and soap dish.

A typical "Bert and Ernie" skit has Ernie coming up with a harebrained idea and Bert attempting to talk him out of it, ending with Bert completely losing his temper and Ernie remaining oblivious to his own bad idea. Other sketches have involved Bert and Ernie sharing a snack by division but finding that one of them has a bit more than the other leading Ernie to stupidly decide to make it even by eating the extra piece.

Others involved Bert wanting to pursue a boring or unreasonable hobby but Ernie asks him to play a simple game with him (such as "The Rhyming Game") but when Bert refuses Ernie makes puns or loopholes to get him into the game and finally when Bert begins to enjoy himself Ernie wants to do something else and asks him and Bert to desert the game much to Bert's dismay.

Others involved Bert preparing a snack for himself and goes somewhere before coming back to find that Ernie has eaten it up. Despite Ernie's attempts to cover up the crime Bert knows Ernie is lying. For example, in one sketch Bert wants to have his chocolate ice cream but when he finds that Ernie has eaten it, he charges, but then Ernie tries his best to cover up his crime by making a disgusting dish: Mashed Bananas with Ice Cubes and Cold Beef Gravy. At the same time Bert is shouting at him that he knows better. Ernie only gets away with his crime because Oscar the Grouch their good friend comes in their apartment and offers them chocolate ice cream cones in exchange for the disgusting dish.

Bert's age is unclear, but a Sesame Street Live performer, Taylor Morgan, has said that "I just kind of try to think like a 6–year–old or a 7–year–old, because that's how old Bert is." This however cannot be the case, as Bert has a twin brother named Bart who is a traveling salesman. This would seem to confirm that Ernie and Bert are adults.

Bert has a twin brother, Bart; a nephew, Brad; and an Aunt Matilda. Brad has a voice like Beaker, but slightly deeper, and while he still made baby-like noises, he was able to talk. It is most likely that Brad is Bart's son since Bart is the only sibling seen for Bert. In one episode, Bert babysits Brad and wants to give Brad a bath, but Ernie says he must give Brad toys to play with. In that episode, Ernie brought a toy shark with him in one skit; Brad was scared by it, not realizing it was a toy until Bert pointed out the fact.

Bart looks exactly like Bert, and Ernie once mistook Bart for Bert; but Bart wears a suit and fedora and is an entrepreneur who is just like Ernie in personality ("Bart's the name and selling's my game!"). Bart also tells several jokes and laughs at his own jokes and has combed hair which shocks Ernie who expected Bart to be as grumpy as Bert. Bert's Aunt Matilda is never shown, but is often talked about, usually concerning Bert buying presents for her for numerous reasons.

Bert is one of Mister Rogers's fans. In one sketch, Bert is trying to write a letter to Mister Rogers and Ernie turns on his electric fan and blows Bert's letters away.

One running gag with Bert is when Ernie often removes his nose either accidentally or for humorous purposes. 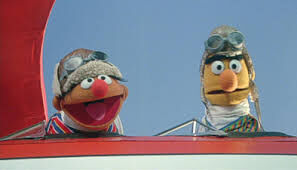 Ernie and Bert in the plane looking for Big Bird 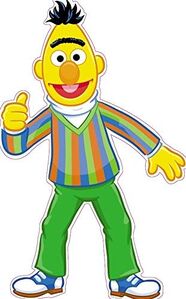 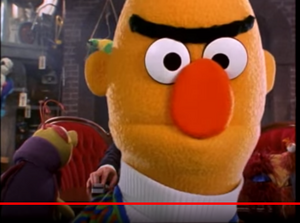 Bert from The Adventures Of Elmo In Grouchland 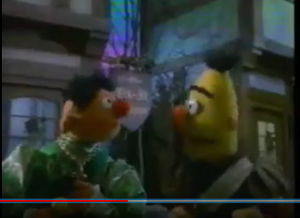 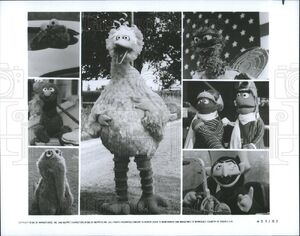 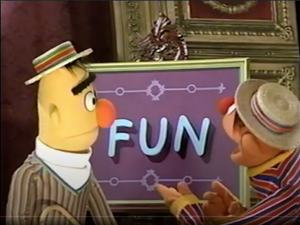 Ernie and Bert from Bert and Ernie's Word Play 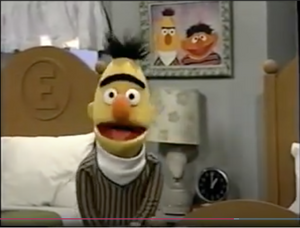 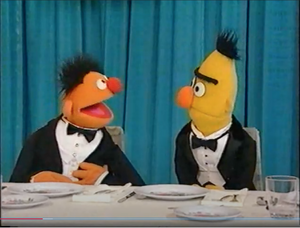 Ernie & Bert from A Celebration of Me, Grover 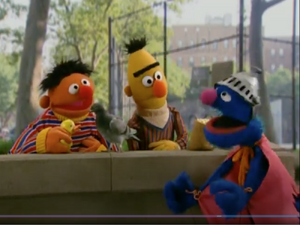