Bertram Winkle is the butler who works for Ross family. He is one of the major characters in the TV show called Jessie. He is Wanda Winkle's son. Mostimes or aleast sometimes he is miserable about the children and his own job. Most out of the four kids, he doesn't like Luke. However he loves them all and comes to support and love them in the end. He is portrayed by Kevin Chamberlin.

Bertram is a bulter who is lazy, sometimes evem misarible and seems to care only a bit for the children. He also names them as "The Nanny Killers". He does have a soft side for them although he doesn't often show it. Sometimes he seems to like Jessie though he sometimes gives her advice, while not being sure his intentions and mistakes where she is from. Mosttimes Bertram takes some time for himself and wishes he could quit his job, but quit once, then came back. Bertram spends his time on reading magazines on the couch, cleaning, and eating bacon-wrapped donuts and watching TV in the screening room. 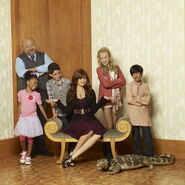 Retrieved from "https://hero.fandom.com/wiki/Bertram_Winkle?oldid=2012089"
Community content is available under CC-BY-SA unless otherwise noted.