Heroic Girl Scout
Elizabeth Kajolica "Bessie" Higgenbottom (simply known as Bessie Higgenbottom or just Bessie) is the main protagonist of The Mighty B!. Her lifetime goal is to collect every Honeybee badge to become her alter-ego superhero known as the Mighty B.

She has total devotion to the Honeybees. She currently is livingoputment above her mom's cafe in San Francisco with her dog and best friend Happy, her younger brother Ben, and her hippie and fun-loving mom Hilary.

She is voiced by Amy Poehler.

Bessie is often portrayed as a wildly imaginative, ambitious, cute, confident, friendly, innocently naive, hyperactive, nerdy, smart, optimistic, spunky, talkative, and a hardworking young Honeybee scout. She is a devoted member of the Honeybees and has the most badges in Honeybee history. In the episode "Bee Nice", Bessie says her policy is to give kindness, and courtesy to everyone she knows. Bessie can also be naive and sometimes has no backbone until she is driven to the edge.

Bessie is shown to be a bit mature for her age. She can be prone to jealousy as seen in "Boston Bean", where her pen pal Sissy Sullivan displayed more creative talents than her. Her passion being a Honeybee is taffy-selling season (selling the most boxes) and her admiration of Miriam Breedlove.

Bessie always is a strict follower of rules and regulations , especially when carries the Honeybee handbooks. However, she can be overbearing and rude without realizing it, as seen when she was hired to be the apprentice of Mary Frances, she never gave her privacy or the chance to relax, and while she was serving Portia and Mary Frances food, she chewed up their food and spat it out, claiming it was "pre-chewed" and served it (with the disgusted faces of Mary Frances and Portia respectively). She also has a complex where she believes she is superior than others, frequently seen on the show overdoing her achievements just to get a badge, or when she shows a competitive spirit to defeat her bestie Penny. There were several times she even forces her brother Ben and her dog Happy to do insane things (at the cost of their health and physical form) just for a badge. 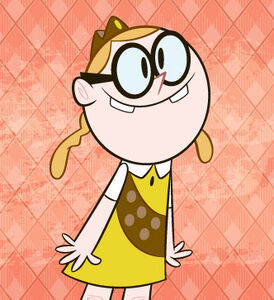 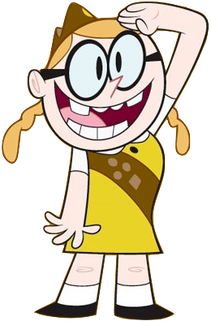 Retrieved from "https://hero.fandom.com/wiki/Bessie_Higgenbottom?oldid=2221678"
Community content is available under CC-BY-SA unless otherwise noted.