Beth Greene was a main character and survivor of the outbreak in AMC's The Walking Dead. She served as a supporting protagonist during Season 2 and Season 3 and one of the main protagonists from Season 4 to Season 5. She is the youngest daughter of Hershel and Annette and the half-sister of Maggie and Shawn Greene. She was in a relationship with Jimmy, another survivor of the apocalypse. After his death, she later began a relationship with Zach in Season 4. She later formed a close bond with fellow survivor Daryl Dixon until she was abducted by police officers under the service of Dawn Lerner, and forced to stay at Grady Memorial Hospital in Atlanta.

Beth was a shy, soft-spoken 16-year old girl who lived a normal life with her family. She lived on her father's farm and attended the local high school. She was a vegetarian and went to church regularly and strongly believes in her faith. Her first appearance was in Season 2 and as the season developed so did she. As the apocalypse started, Beth had been sheltered from the chaos surrounding her. At first, Beth is rather timid, pessimistic, and keeps her emotions to herself, but after being forced to see her mother's death and horrific reanimation, Beth finally breaks down and a different part of her is shown. She tells her sister, Maggie, that she wants to commit suicide. However, after a minor attempt she has a change of heart and decides to live. With the support from her father and sister, Beth regains her will to live and since then, becomes even more assertive, even after the death of her boyfriend and Patricia.

By the third season, Beth has grown more self-assured and goes on to become a more important and vocal member of the group, Beth is a source of optimism and hope for the group, often singing to help boost morale. She is much more hopeful and optimistic and sees the positive side rather than the negative side on a hopeless situation. After the death of Lori, Beth becomes a caretaker for Judith Grimes, taking on a more motherly role.

After the Woodbury conflict, Beth is emotionally stronger, trying many different ways to deal with the loss of hope that grows everyday, realizing that things may someday take a turn for the worse. After dating Zach, she became emotionally distant, preparing herself so that when someone she loved dies, she won't shut down emotionally like she used to in the past. After Zach's death, she spent her time dealing with the new crisis surrounding the prison. Beth kept hope alive, while struggling with herself not to break down emotionally. After her father's death, Beth was distraught but grew stronger and found new strength in herself. Beth became more independent and more skillful at killing walkers. After spending time together with Daryl after the prison assault, the two become very close, and Beth's faith becomes stronger. She believes there is still hope and good people somewhere, even in this cruel world. She also thinks that since walkers used to be human, they shouldn't be treated cruelly or be made fun of, but instead, respectfully put them out of their misery to preserve their humanity.

After spending time helping around at Grady Memorial Hospital, Beth's positive attitude began to fade as she attempted to fight the corruption of leadership there. She had helped her friend Noah escape just to be beaten down by the leader, Dawn Lerner. As she was about to disregard her good morals and nearly made the decision to kill Dr. Stevens for causing the death of a patient, but stops as she sees her fellow survivor, Carol Peletier, carried in on a stretcher. Beth decides to go out of her way to help Carol get better while she was there, with some assistance from Dawn. Dawn later says she did this because Beth reminds her of herself when she was younger.

As Beth and Carol are finally about to be escorted out of the hospital via hostage exchange, Dawn calls out that she wants Noah back. Before Noah makes the decision on his own, Beth hugs him, and walks up to Dawn. Beth stabs her with a pair of concealed scissors in order to ensure Noah and the hospital resident's freedom, only for Dawn to survive and quickly shoot her in the head, instantly killing Beth. Daryl kills Dawn out of anger immediately afterwards, and her elder sister Maggie emotionally breaks down at the sight of her corpse.

Beth as she appears in season 2.

Beth as she appears in Season 3.

Beth as she appears in season 4. 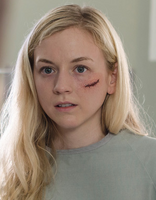 Beth in Season 5
Add a photo to this gallery

Retrieved from "https://hero.fandom.com/wiki/Beth_Greene?oldid=1622282"
Community content is available under CC-BY-SA unless otherwise noted.