Beth Smith (née Sanchez) is the tritagonist of the show Rick and Morty, she is the daughter of Rick Sanchez (replacement dimension) and Mrs. Sancez/Diane Sanchez, the wife of Jerry Smith, and the mother of Summer Smith and Morty Smith (replacement dimension), she is also the daughter-in-law of Leonard Smith and Joyce Smith, and the granddaughter of Rick's Father and a unnamed woman. She currently acts as the mother and the daughter of the Morty Smith and Rick Sanchez from Dimension C-137, respectively. She is currently employed as a veterinary surgeon at St. Equis Hospital.

Characterized by a superiority complex and abandonment issues, Beth gradually came to struggle with her husband over his contributions to their marriage, due in part to his lower-level position and subsequent employment, further driven by her father influencing her feelings of superiority. Since their divorce, she has focused on raising her two children. However, by the finale she decides to reconnect with Jerry and they are living together with their children and her father.

She is voiced by Sarah Chalke.

The details of Beth's history are relatively unknown, she was born from Rick Sanchez and Mrs. Sanchez/Diane Sanchez, she has recounted herself as a "bright-eyed" woman from Muskegon, Michigan in "Meeseeks and Destroy".

At some point during her childhood, her parents' marriage deteriorated amid unknown circumstances and her father left her mother. Beth blamed herself for her parents falling out, and seeing her father as an intelligent scientist compared to her mother, Beth came to idolize her father and blamed her mother for "chasing off the dad with the guts to leave".

It is revealed in "The ABC's of Beth", that at some point of her childhood, Beth became an insane and psychotic little girl. She began to ask to her father Rick to create toy-like weapons to harm other children. Being an adult, Beth excused that she asked that to "spend time with her father". Rick, aware that the increasing danger that would represent his daughter, created a dream world for his daughter, Froopyland, in order to keep the other children of the neighborhood safe. Beth managed to take one of her friends, Tommy, to Froopyland, where, according to Tommy, she pushed the child into a honey swamp, in an act of jealously with Tommy and his good relationship with his father. Then she autoconvinced herself that Tommy got lost in Froopyland.

Beth aspired to become a heart surgeon as an adult, but during the High School, at the age of 17 years old, she went to prom with her classmate, Jerry Smith, possibly out of pity, and they had sex, and she became impregnated with her first and only daughter, Summer. She contemplated aborting the fetus, later justifying that "everybody thinks about it", but managed to get into college and become a veterinary surgeon, specializing in horses, eventually finding work at St. Equis Hospital. She also decided to marry her boyfriend Jerry and eventually had their second and only son, Morty, at the age of 20 years old.

Beth was somewhat distant towards her children at their childhood, as implied in "Raising Gazorpazorp", her job as a veterinary surgeon at St. Equis Hospital causes her to spend less time with her husband and children, feeling that coddling them would make them dependent or end up like her husband.

Though it has been implied by Dan Harmon and the episodes "Rick Potion No. 9" and "The Whirly Dirly Conspiracy" that Jerry and Beth's relationship was more stable before Rick came back into her life.

As a little girl, Beth wore overalls with a red shirt, long white socks, and black Mary Janes, as well as a green hair-clip and two wristbands. 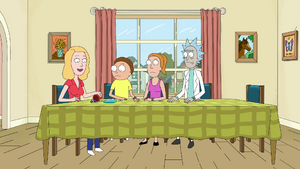 Beth with the robots of her father and children. 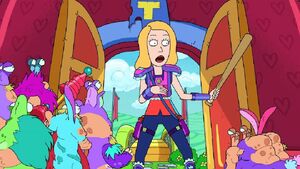