Guardian of the Great Protoon

Servant of the Bubble Dreamer

Help Rayman on his adventures.

Protective Fairy
Betilla, also known as The Great Fairy, is the oldest member of the nymph sisterhood. Her appearances throughout the Rayman series vary considerably. However, in all reiterations to date, she possesses long, red, flowing hair, dons a peaked mage-like hat, and is responsible for bestowing powers upon Rayman.

In Rayman, her original duty was protector and purveyor of the Great Protoon Orb and the balance it maintained throughout the Rayman Universe. This balance was disrupted when the evil Mr. Dark entrapped the electoons (source of power for the Great Protoon Orb and several beings and creatures), diminishing the once great magical abilities of Betilla, consequentially defeating her and stealing the Great Protoon Orb. Betilla in her weakened state is encountered early in the game and initially grants Rayman the ability to punch by launching his disjointed fist. Progression through the game will enable similar encounters with an ever-increasing healthy and encouraging Betilla, who bestows further powers to our hero Rayman, including but not limited to: the ability to swing off special flying "O" ring creatures, temporary flight using helicopter-hair, etc.

Betilla's first appearance in Rayman, has her depicted as a wingless fairy, and like Rayman and other Raypeople particularly within this Rayman universe is limbless. Her hands are covered in white gloves and her shoes (or boots) are yellow and partially green in colouration, not too dissimilar from Rayman's appearance. Her body appears to be comprised of a formless two-toned, green-yellow, floating cloak, adorned with blue stars and a tapered neck. Her lips are a shade of purple-pink and her eyes are similar to that of other Raypeople. Her hair is free-flowing and approx. two thirds her body length. Her headwear is a horn-shaped, flute-like hat, with a peaked top, similarly coloured and patterned to match the rest of her ensemble.

Betilla, being a member of the sisterhood of nymphs, utilized and collated the power of "the magnificent moon beams of the second Summer solstice" to conjure and create the fabled hero "destined to preserve the equilibrium of the sacred universe. The one we call Rayman". During the events of Rayman Origins she is captured by evil minions and imprisoned, as with her sister nymphs, in the jaws of an enemy Darktoon that endeavor to flee from suspected heroes who would seek to free their captive prey. Once freed from the confines of her captives, Betilla grants Rayman and his companions the "power to attack", bestowing the ability to punch, slap, or manifest forward thrust (pelvic thrusting), to Rayman, Globox and Teensies, respectively.

In Rayman Origins, Betilla, as well as the other nymphs, contrastingly possess connective limbs and appendages compared to Betilla as she appeared in Rayman 1. Her appearance matches the cartoonish styling of the Rayman Origins universe, and ties in with the formulaic styling of the sisterhood of nymphs. Similarly to her fellow kin, Betilla the nymph has a curvaceous figure, accentuated cleavage, hips and thighs and semi-transparent fore-wings similar to that of a dragonfly (without the hind wings) that permit her to hover, fly and perform aerodynamic manoeuvres. She adorns a strapless two-toned green bikini top, an alternated-matching miniskirt and matching thigh-high leggings and a peaked mage-styled hat that is cocked to the left (looking straight on) in most of her appearances. Her hair is a deep red and lighter red (on her hair shine) that sweeps and curls for the entire length and a quarter of her total body length (hat excluding). On each of her wrists she has a set of lose fitting golden bangles that slightly slide the length of her forearm, she also has 3 tiny, brown-ish freckles on both cheeks.

Betilla is the first encountered nymph of the sisterhood, and is freed from captive enemies in the Jibberish Jungle. It is speculated that this is the domain she resides in and protects; as with her sisters whom are encountered across the various other realms in the Rayman Universe. 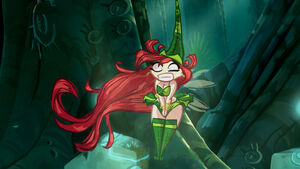 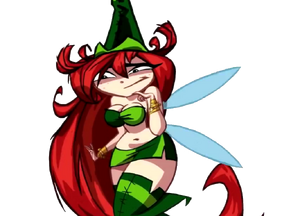 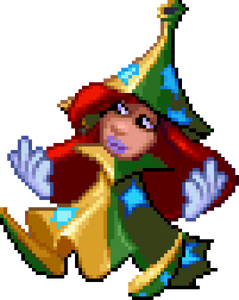 Betilla in Rayman.
Add a photo to this gallery

Retrieved from "https://hero.fandom.com/wiki/Betilla?oldid=1968129"
Community content is available under CC-BY-SA unless otherwise noted.