Helping and being with Bruce.

Be with Bruce Banner (succeeded).
Kill Hulk (as Harpy, formerly).
Have her father be redeemed.

Elizabeth "Betty" Ross is a fictional character from Marvel comics and universe, and is a major heroine from the Hulk comics.

Betty is the daughter of Thaddeus "Thunderbolt" Ross, an enemy of her love-interest Bruce Banner (The Hulk). She later became Harpy, a creature infused with high amounts of gamma radiation by M.O.D.O.K., who brainwashed her to kill the Hulk. Betty also became Red She-Hulk after being resurrected, and became a mercenary to hunt down Domino.

Elizabeth "Betty" Ross was born in California to General Thaddeus "Thunderbolt" Ross and Karen Lee, who later died when Betty was a teenager. As a result, Thaddeus shut Betty out his life, and claimed that a military base was no place for a young woman. Betty was later sent off to boarding school, and returned home under the dominance of Thaddeus after finishing school.

She joined her father in going to the base in Nevada that was part of the secret Gamma Bomb Project, and met Dr. Bruce Banner. The two became attracted to each other, but General Ross saw him as nothing but a weakling, and became to hate the scientist. Banner was later exposed to gamma radiation, causing him to transform into the Hulk, and started to cause massive destruction. Bruce managed to hide his monstrous identity, as General Ross and Major Glenn Talbot began to suspect Banner was a traitor. Despite Talbot falling in love with Betty, she stayed loyal to Bruce despite not knowing he was the Hulk.

Later on, Betty was kidnapped by the Grecian ruler Tyrannus, who began to invade the surface world from his underground domain of Sbuterranea. Despite making General Ross comply his orders to protect his daughter, Betty was rescued by the Hulk. Betty and Bruce fell more in love, and the latter's condition changed so that he could control his changes into the Hulk. Thaddeus eventually consented to Betty and Bruce's wedding, but it was interrupted by the Leader, who fired radiation that returned Bruce to his previous condition.

Though Betty remained in love with Bruce, she later learned that he was also in love with Jarella, a queen from the world K'ai. Believing she lost him to someone else, Betty allowed herself to fall in love with Talbot, and they later married. While on their honeymoon, Talbot learned that General Ross was captured by the Gremlin, a Soviet scientist who sent Thaddeus to a Soviet prison. Talbot joined a mission to rescue his ally, and was successful despite being captured himself. Afterward, Ross believed that Talbot had been killed, and Betty suffered a nervous breakdown when she learned of Talbot's supposed death.

When M.O.D.O.K. discovered Betty in her condition, he decided to use her to create a powerful monster to defeat the Hulk. She was infused with gamma radiation, causing her to turn into Harpy and become insane, wanting to kill the Hulk. She eventually broke out of a her prison and was directed to find Hulk by M.O.D.O.K. Harpy and Hulk battled each other, and before the latter could kill the creature, Harpy told Hulk that she was Betty. This allowed Harpy to blast Banner unconscious, as he was shocked by the truth.

General Ross saw Harpy and Hulk fighting on tv, and recognized his daughter and ran to the site to stop them. The general attempted to convince her that she wasn't a monster, but Harpy flew away with Hulk as she was still under M.O.D.O.K.'s brainwashing. When flying away, Harpy and Hulk were pulled into a strange tornado, and found themselves in a strange city hidden in the clouds. The two were confronted by the Bi-Beast, and Harpy attacked the creature when it grabbed her. Hulk, wanting to protect Betty, fought the creature as well, but reverted back to Bruce when he lost oxygen from the upper atmosphere.

Bruce explained to the Bi-Beast that he was a scientist, and the creature told Bruce that the island was created by the "Bird People" and he was created to be a living monument of their achievements. He asked Banner to use his skills to save the city, as the machines holing the city in the air were starting to break down, and he had not knowledge on how to repair them. In addition, Bi-Beast explained that he captured Harpy because he yearned for company, and that she resembled his creator.

While the two worked to save the city and cure Betty, M.O.D.O.K. came to the island looking for Harpy. M.O.D.O.K. managed to trick Bi-Beast into thinking that Bruce was going to betray him, and the creature fell for it. Bi-Beast accidently hit the self-destruct button, and Banner decided to escape with Betty, but felt that he failed to cure her with the machine. After the island fell apart, parts of the building fell on top of the Harpy, and when the dust cleared, Harpy reverted back to Betty. Betty was returned to normal and it was permanent, proving that Banner's machine worked after all.

When Talbot was rescued and was proven to be still alive, Betty realized that she was still in love with Bruce. She decided to divorce Glenn, who died trying to destroy the Hulk when he blamed Bruce for the end of his marriage. Bruce once again achieved a state where he could control his transformations, but Betty was upset because she wanted Bruce to be rid of Hulk. When Betty learned that her father conspired with M.O.D.O.K. to kill Hulk, she accused him of treason. Thaddeus realized she was right, and nearly committed suicide, but decided not to and disappeared.

When Hulk disappeared from Earth, Betty began to date a man named Ramón, but left him when Hulk was sighted on Earth. Betty returned to the Gamma Base, where the Hulk was subjected to a process to split the creature from Bruce. Appearing cured, Bruce proposed to Betty, and she accepted, and the two had a wedding. At the wedding, Thaddeus appeared and attempted to stop the wedding, shooting Rick Jones in the process.

Betty confronted her father, accusing him of controlling her life and made him surrender his gun. Afterward, Betty and Bruce married and were pronounced husband and wife.

While Bruce continued his life as the Hulk, Betty learned that being with him had left her dying from gamma radiation poisoning. The Abomination learned of this, and decided to get revenge for his defeat by Hulk, poisoned Betty with his own gamma blood and she died. However, she returned with a new face and gave Hulk information under the code name Mr. Blue, but didn't want to have a relationship with the hero.

Betty's mysterious appearance was revealed to have been illusions made by Nightmare, and Betty washed up on the same beach where the Hulk learned of the manipulation. Nightmare had taken an interest with Betty, and had a daughter with her named Gwen (Daydream).

Betty was later resurrected and was present at her father's funeral, and was apparently with Glenn due to Bruce's recent marriage to Cairea.

Betty was resurrected and became Red She-Hulk, a female version of her father's alter-ego Red Hulk, and protected him from Wolverine. She proudly challenged Wolverine and boasted that she stole Elektra's Sai and Domino's automatic firearm after killing them. Amidst their battle, Red She-Hulk dragged Red-Hulk from the fight, and brought him to the sewers to escape.

She double crossed Red Hulk and stabbed him in the neck with Elektra's Sai, and later kicked him off the empire State Building. Betty reverted back to her human form after being stabbed with a word by Skaar, who was stopping her when she captured Hank Pym for Intelligencia.

Betty tells Bruce how she came back to life, and tells him to leave her to die before reverting back her hulk from when Doc Samson showed up. Despite returning back to her Red She-Hulk form, her mind was in control and she helped Bruce reconcile with Skaar, who was his son. When Bruce gained the upper hand when fighting her father, she worried for them, and her heightened aggression leads her to fight Bruce's cousin, Jennifer Walters. After General Ross was taken into custody, Betty managed to convince Bruce to give her father the opportunity to redeem himself. 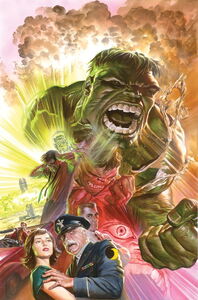 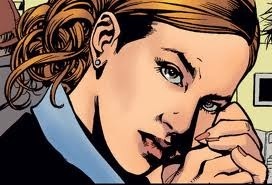 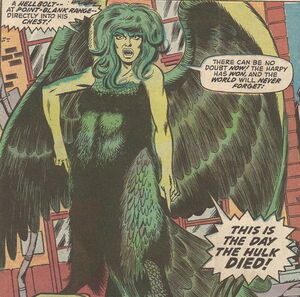 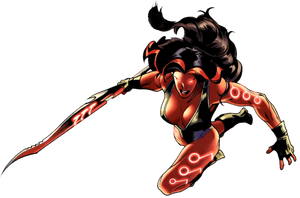 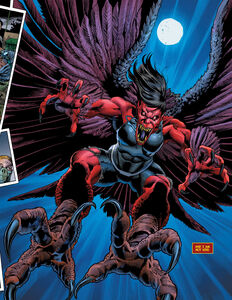 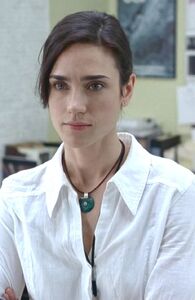 Jennifer Connelly as Betty Ross in the 2003 film Hulk. 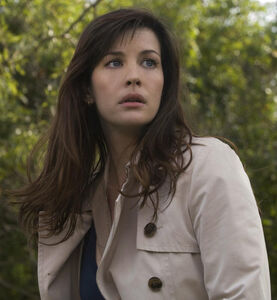 Liv Tyler as Betty in The Incredible Hulk. 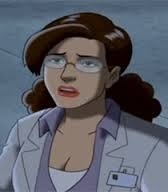 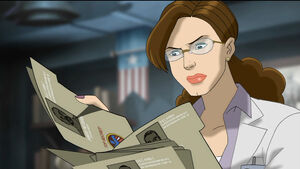 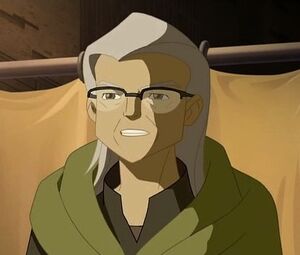 Betty in The Next Avengers: Heroes of Tomorrow. 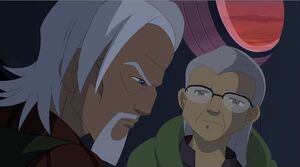 Betty saw Tony being hard on himself. 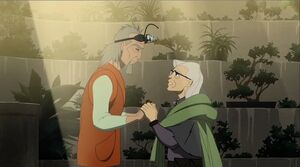 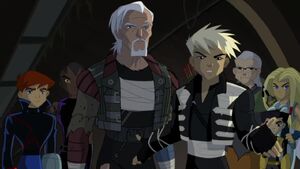 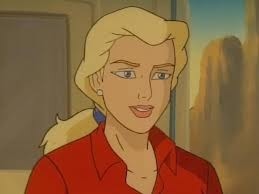