Save the Amazon rainforest from Big Boss' illegal logging (succeeded)

Bia is one of the three tritagonists of Rio 2, the others being her siblings Carla and Tiago.

She is the daughter and middle child of Blu and Jewel, the younger sister of Carla, the older sister of Tiago, the granddaughter of Eduardo, and the great-niece of Mimi.

She is voiced by Amandla Stenberg.

Bia is the middle born of her brood (three minutes and 2.5 seconds after Carla, the eldest of the three). She is around the same height as Carla and is noticeably taller than Tiago. She inherits most of her appearance from her mother but, like her brother and sister, possesses her father's beak and talons. Her eyes are hazel-brown, similar to her parents.

She has a combination of Blu and Jewel's feathers. Her "hair" style is similar to Jewel's and Carla's, although it doesn't curl, so the feathers fall straight down the back of her head. Her wings and tail are darker than the rest of her plumage, and she also has dark eyelashes like her mother and sister. Unlike the other members of her family, Bia often points her tail in the air, rather than let it rest on the ground. This gives her an overall "S" shape, with elegant curves. It has been said that she looks similar to what Jewel looked like when she was a hatchling.

She has facial markings that seem to resemble Carla's most of the time, but she actually has Jewel's markings: a band over the top of the beak and around the eyes, but not the same color. Whilst Carla's are darker, Bia's are a lighter shade. Bia has the shortest and smallest wings of the brood.

Bia is very intelligent, the smartest of her siblings. She is polite, well mannered, kind-hearted, and dreamy. She seems to have a closer relationship with her father than with her mother. Bia doesn't like her possessions being taken away, glaring at Tiago (somewhat amusingly) when he takes her book from her.

Bia loves to learn and is a bit of a know-it-all. She enjoys randomly saying facts, like the nutrition information she sees in a recipe book or while examining a larva in the jungle. Gentle and tame-natured like Blu, Bia is very sweet, though she isn't timid like him and enjoys thriving in the Amazon. She is shown to be interested in and love animals, reading about and saying facts on them.

Bia is smart like her father, always with a book in her wings and quick to spit out facts and figures. But when she gets to the Amazon, she is inspired by its awe and wonder. For once, she puts down her books and experiences the colorful life around her.

Though not named at the time, Bia and her brother and sister are seen at the end of the film, flying, singing, and dancing with their parents, Blu and Jewel. The three chicks also sing a line in the song "Real in Rio".

Bia is first seen helping her brother and sister set up fireworks, showing her calculations in the soil. She is confident that the fireworks will go off to the beat of the music but then doubts her work, worrying that she didn't carry "the one". She is briefly annoyed when Tiago snatches the match from her. Blu and Jewel then show up, with Blu telling them it is dangerous for them to play with fireworks while unsupervised. Bia tells her parents that they asked for Tiny's permission, but Blu said that "that was even worse". As Blu's tail catches fire, he repeatedly says "no", leading Bia to say that that is his "27th 'no' today". As the fireworks go off, Bia watches with an expression of awe and wonder.

At breakfast, Bia reads some facts from a pancake recipe, that whole wheat pancakes makes twice the vitamins and minerals of regular pancakes. She cheers alongside Carla when Blu kicks a blueberry onto a pancake and watches excitedly as the news announces the discovery of a wild Spix's macaw found in the Amazon. She is ecstatic when her mother decides that they should go into the Amazon to help find the other macaws, noting that Blu not saying "no" meant that he "practically said yes".

Before embarking on their journey to the Amazon, she informs Blu about snakes that can "swallow you whole" in the Amazon, scaring him with a pop-up snake from her Amazon book. She brings the book with her to the Amazon, enjoying the journey. Bia sees many of the creatures she had read about in her books in real life, one of which is the "Prismatic" butterfly during one of their stops during the journey and is overjoyed with the experience. Once they arrive at the Amazon, Bia remarks on Heliconius larvae about to enter its pupa stage. Tiago laughs, thinking she said "poop" instead of "pupa". Bia says it's pupa and calls him a "birdbrain", and chases after him. She and the others are then picked up by some disguised Spix's macaws and deposited in their sanctuary. As Jewel says that they've found the blue macaw tribe, Bia remarks that it technically was the other Spix's macaws that found them.

When she meets her grandfather Eduardo, she says it is nice to meet him, respectfully calling him "sir". Eduardo is delighted and asks her to call him "pop-pop" instead and hugs him with her brother and sister. She also runs away from Mimi, frightened when she tries to hug her and her siblings. Bia dances with her family during "Beautiful Creatures". When Roberto offers the family his nest to stay in, Bia briefly argues with her siblings over who gets the biggest bedroom. Jewel later sings them to sleep with a lullaby.

The next day, after she and other Spix's macaw chicks watch Tiago play a prank on Blu, Bia forcefully gives her father some clay, telling him that "aunt Mimi says it is good for digestion". She then cheers for Blu and Roberto during the soccer match "war", yet displays disappointment when Blu loses the match by accidentally kicking the ball into their own goalpost. However, she soon forgives him. During the fight against the loggers, Bia and Tiago control a tree harvester - Bia providing instructions on how to operate the tree harvester, Tiago manually operates the tree harvester's controls - driving it away from the rainforest. As the loggers flee, Bia, Carla, and Tiago are seen hugging in joy.

As Nigel and Gabi are supposedly dying, Bia suddenly points out that Gabi isn't poisonous. Nigel and Gabi are both surprised, and both stare momentarily at Bia. Bia then states that it is a very common mistake and that Gabi is harmless. She proceeds to imply that you can tell Gabi apart from poisonous frogs because of her pink spots. As Nigel tries to attack Blu, Blu pulls Bia and Tiago close to him in order to defend them, but Gabi drags Nigel away, deliriously happy that she isn't poisonous.

Bia then dances with the tribe and her family during the "Amazon Untamed" performance, enjoying being in her new home in the Amazon rainforest.

At the beginning of the Rio: Snakes Alive! novel, Bia listens to her father to explain the sanctuary's economic woes. Like her brother and sister, she is excited, rather than scared when Blu describes the wild and follows her family as they go to Luiz for answers. When Luiz describes the legend of the Pedra da Gávea, Bia is excited to go, but disappointed when Blu and Jewel leave her and her siblings in Nico, Pedro, and Rafael's care, claiming that she could have learned much from the trip. Becoming bored as Nico, Pedro, and Rafael attempt to teach them to dance, Bia follows her sister Carla as they escape the sanctuary to go after their parents, under the cover of playing hide-and-seek. When they run across Basil, Bia is interested in his unusual bat species (later shown to actually be undiscovered), and she and Carla console the sad bat while Tiago brings his stick friend Jeffrey back to him. She helps calm the bat by explaining to him that he probably scared Blu more than the opposite. They then follow his lead to the rock. Upon being informed by Nigel of their parents' cave-in accident, Bia and her siblings rush to their location. Bia reads the hieroglyphics on the wall and discovers them to be instructions to a secret door that could free her parents. As Blu and the bat colony discover and try to fight off Ssssalbatore, Bia, her sister, and mother flee. In the final pages, Bia is seen happy to have rescued and been reunited with her parents. 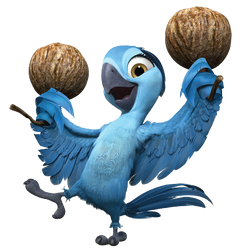 Bia with her siblings