Note: Not to be confused with Bianca from the movie "Pokémon Heroes: Latios & Latias", who lives in Johto and whose Japanese Name is Kanon.

To convince her father to allow her to follow her dreams (in Black & White; succeeded)
To assist Professor Juniper (in Black 2 & White 2)

Bianca (Japanese: ベル Bel) is a Pokémon Trainer from the Unova region. In the games, she is a childhood friend of Cheren and the protagonist, as well as one of their rivals. In the anime, she is one of Ash's three rivals in Unova and is also a recurring traveling companion.

She is voiced by Shizuka Itō and Ayana Taketatsu in the Japanese version, and by Erica Schroeder and Eileen Stevens in the English version.

Bianca is of medium height and is a slim girl with short yellow-blonde hair and bright green eyes.

Bianca wears a white shirt under a tangerine orange tank top, a tight-fitting shin-length white skirt which gives her bottom half a wider shape, and a white bracelet on her left arm. She also wears a green beret with a white stripe running along the rim, orange tights and yellow pumps with white bows. Bianca also has a green fringed shoulder bag, which she wears on her right hip over her left shoulder.

Bianca sports red glasses, a low white V-neck top with a black top underneath, knee-length green jogging bottoms, a green shoulder bag, orange boots with black soles and bows, green beret with a white bow and orange puffy coat, due to the recent coldness in Unova.

Bianca is a sweet and cheerful girl who worries about being weak and what to do in her life. She has a strong side by traveling without her father's consent. Later on, she grows in confidence and accepts she'll never be the strongest trainer. She is protective, volunteering as a bodyguard for various characters, including Professor Juniper at Chargestone Cave.

Like in the anime, Bianca lives in Nuvema Town with her parents alongside the player (Hilbert \ Hilda) and Cheren.

In Black & White, Her overprotective father forbids her from starting her journey and following her dreams, but after she convinces him with the help of Elesa, Nimbasa City's Gym Leader, he allows her to follow her dreams.

Like the player, Bianca lives in the starting town of Nuvema Town and is also a childhood friend of the player (and soon-to-be rival). She is described as being 'flighty' by Professor Juniper and Cheren; though she also has a strong side, as shown when she embarks on a Pokémon journey despite her father's strong opposition. This is emphasized in Nimbasa City, where her father disallows her to become a Pokémon Trainer. With the help of Nimbasa City Gym Leader Elesa, Bianca convinces her father to let her follow her dream.

In keeping with the theme of truth and ideals often seen in Black and White, Bianca represents those who pursue truth - this is highlighted when N comments that Bianca had to face the truth that not everyone can become stronger. She often admits that she is not a strong Trainer compared to the player and Cheren; and thinks about what she can do in life (whereas Cheren is seen to ponder about what he should do). Later in the game, she decides to research and learn more about Pokémon with Juniper.

Like the player and Cheren, Bianca receives a starter Pokémon as a gift from Professor Juniper at the start of the game; she chooses the Pokémon with a type disadvantage to the player's starter Pokémon. The player encounters Bianca on several occasions, where she often challenges the player to a battle.

After the player has defeated Alder, she will be around to battle them on weekends in Nuvema Town.

In Black 2 and White 2, Bianca appears as Professor Juniper's assistant, giving the player his \ her starter Pokémon. She, after not seeing him for two years, will also be reunited with Cheren in Aspertia City.

She appears several times throughout the game, generally running errands for Professor Juniper, such as looking for Tynamo in Chargestone Cave. She will accompany the player as a tag partner on the player's first visit to Reversal Mountain while she investigates the Pokémon Heatran.

She can be called on the Xtransceiver to figure out the player's current Friendship level with Pokémon in his or her party. After the player has defeated the Champion, she can also figure out whether a Pokémon in the player's party has reached its effective cap in effort values for any stat (252), or overall (510).

Bianca made her debut appearance in Minccino-Neat and Tidy!, where she was sent by Professor Juniper to deliver a Badge case to Ash. Unfortunately, Bianca ended up knocking Ash and Cilan into a nearby stream. Despite being older than Ash, she has only just started her journey due to her father not allowing her to become a Trainer when she turned ten.

Bianca is shown to be very excitable, for instance when a Minccino stole the Badge case and Ash attempted to use Oshawott to get it back, Bianca commanded him to use Hydro Pump despite the fact that Oshawott wasn't her Pokémon nor did he even know that move. She later made the same mistake when she commanded Pikachu to use Zap Cannon.

She also had a battle against Ash, where she used her Pignite against his Pikachu. Ash was planning to use Oshawott for said battle but Bianca demanded that he use Pikachu. She lost the battle after putting up a hard fight.

Prior to Emolga the Irresistible!, Bianca joined the group and accompanied them on their way to Nimbasa City. She was enjoying an evening lunch with Ash and company when Iris's Axew drops a fruit down a hill where it is caught by a wild Emolga. She then runs after Emolga and smothers her in hugs. Determined to catch Emolga, Bianca challenges her to battle Minccino, who ends up losing. Emolga then flies off and Bianca chases after her. After several failed attempts at catching Emolga, Bianca is crushed to find that Emolga accepts Iris as her Trainer instead.

In Emolga and the New Volt Switch!, Bianca wanted to have a battle with Iris's newly caught Emolga. However, Emolga had other interests besides battling and kept using Volt Switch to get other Pokémon to battle Bianca instead including Iris' Excadrill, Cilan's Pansage and Ash's Snivy. She also used her Pignite against Snivy for a short training session. After learning Ash earned three Badges already, Bianca leaves the group in hopes to win more Badges on her own.

Bianca met up with Ash and friends again in Nimbasa Town in Reunion Battles In Nimbasa!. She was enamored with Luke's Zorua and attempted to catch her not knowing that she already had a Trainer. Bianca also decided to enter the Club Battle tournament along with the group. In the next episode, she battled Stephan in the first round of the tournament where she used her Minccino against his Zebstrika. Zebstrika proved too powerful and defeated Minccino, thus knocking Bianca out of the tournament.

Bianca reappeared in Enter Elesa, Electrifying Gym Leader! where she battled Elesa in a Gym battle. However, all of her Pokémon were defeated by Elesa's Zebstrika.

Bianca reappeared in Crisis at Chargestone Cave! where she revealed that she was going to trade her Shelmet for Professor Juniper's Karrablast. However, before that, the wild Galvantula and Joltik in the area started to cause trouble so she decided to help Ash and the group deal with the problem. In the end, it was revealed that Team Rocket was behind the whole ordeal and after helping defeat them, Bianca met up with Professor Juniper.

In Evolution Exchange Excitement!, Professor Juniper and Bianca traded their Shelmet and Karrablast together, making them evolve into Accelgor and Escavalier respectively. However, as soon as it had evolved, Escavalier started disobeying Bianca. To improve their teamwork, Bianca and Professor Juniper decided to use their new Pokémon in a Tag Battle against Cilan's Crustle and Ash's Boldore. As Accelgor protected Escavalier by using Substitute, the two Pokémon started to work better as a team, and they were able to defeat Boldore together. Despite that both Accelgor and Escavalier were then defeated by Cilan's Crustle, Bianca was glad that her new Pokémon was now obeying her.

Bianca reappeared in The Clubsplosion Begins! in order to register in the Clubsplosion tournament. She discovered that her first opponent was Trip who took her very lightly as an opponent. Her battle with Trip began in Search for the Clubultimate! where it was revealed she had evolved her Pignite into Emboar. Though Emboar was on the field, Bianca was nowhere to be found. A bit later she runs onto the battlefield, claiming that she was late because she was too busy touching Domon's Mienshao's muscles, then trips and falls on her face. However, it does not get her down and is as eager as ever to get the battle started. She has Emboar attack with moves like Arm Thrust and Hammer Arm but Trip has Conkeldurr block with its concrete pillars. Bianca becomes concerned about losing the battle after Emboar becomes trapped in Conkeldurr's Rock Tomb and cannot evade its Stone Edge. However, in the next episode, Bianca cried to Emboar to do something before the attack made contact. A smile then comes to her face seeing that Emboar actually caught the stones in his arms. She then commanded him to use Fling to send the rocks back at Conkeldurr. Conkeldurr becomes distracted by it and Bianca has Emboar take its concrete pillars from it then used Fling again to throw them back at it, which knocked out Conkeldurr and got Bianca through to the second round. Later on, Bianca discovered that her opponent for the second round was Georgia and her Bisharp whom she defeated rather quickly. She then battled Stephan again in Commanding the Clubsplosion Crown!, but lost.

She reappeared in Curtain Up, Unova League! and met up with Ash, Iris and Cilan in Vertress City to compete in the Vertress Conference. In the first round, she battled with her Emboar against Michael and his Watchog and won. In Mission: Defeat Your Rival!, in the second round, she battled Cameron using her Escavalier and Emboar against the latter's Samurott and Riolu. Her Pokémon put a good fight but were eventually defeated, resulting in her elimination from the league, much to her disappointment. She stayed for the remainder of the league, watching all the other battles. In A Unova League Evolution! she participated in the closing ceremonies of the Vertress Conference. Afterwards, she bought ice creams for Ash, his friends, Stephan and Cameron and his Lucario. She then said farewell to the group and left. 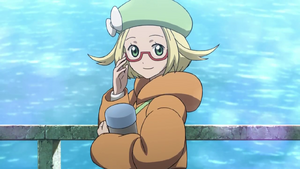 Bianca in the animated trailer 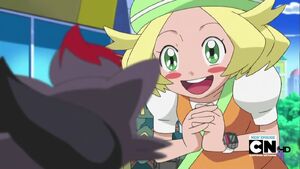 Bianca's Pokémon in the Anime 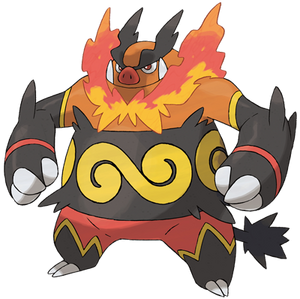 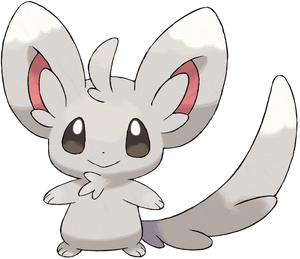 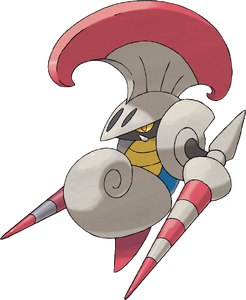 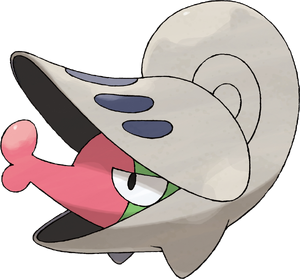