Heroes Wiki
Register
Don't have an account?
Sign In
Advertisement
in: Articles under construction, Infobox Update, Female,
and 35 more

Apprentice of the sorceress (formerly)

Redeemed wizard
Bianca is a rabbit girl who used to work for the Sorceress. She first appeared in Spyro: Year of the Dragon, starting off as a minor antagonist, but becoming an ally after learning about what the Sorceress' true intentions were involving the newborn dragons. She is Hunter's girlfriend.

She is voiced by Pamela Hayden who also voiced Milhouse Van Houten, Mona Simpson, Rod Flanders, and Allison Taylor in The Simpsons. In the reboot, she is voiced by Melissa Hutchison.

Her attire consists of a orange short-sleeved dress with light green markings on the sleeves and an burnt orange belt with brown and orange-trimmed boots. She also dons a purple cloak which conceals her whole body.

At first glance, Bianca starts off as hostile, as she repeatedly threatens Spyro early on in his quest, but even then she'll slip up and reveal that she's nowhere near as nasty as she's trying to make herself look. Even after thanking Hunter for saving her life in Midday Gardens, she quickly tries to establish herself as an enemy. She's a lot nicer to Spyro when he arrives in Evening Lake, begging him and Hunter to turn back before they have a chance to fall for the Sorceress' trap and promising that she'll take good care of the remaining eggs once they hatch, and all hostility is gone when she finds out the Sorceress's true nature. 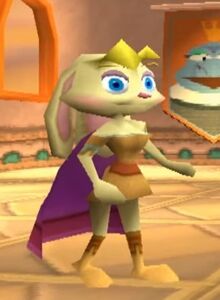 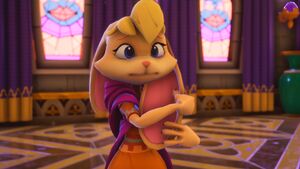 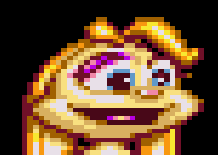 Bianca's dialog image as seen in Season of Flame.