Barda
Doyenne Barda
Barda the Betrayer
Doyenne of the Furies

Being with Mister Miracle

Big Barda is a fictional character and superheroine (but sometimes seen as a villain) from DC comics, and is a New God a former Female Fury and later wife of Scott Free a.k.a Mister Miracle. Originally groomed by Granny Goodness to be a disciple and soldier for Darkseid, Barda fell in love with Mister Miracle, and decided to become a hero. Afterward, she became a member of the Justice League of America, and the Birds of Prey.

She was created by the late Jack Kirby, and first appeared in Mister Miracle #4 in October of 1971.

Barda is a New God, a race of cosmic entities that have been waging war on Earth. She was raised on the cruel and destructive planet Apokolips and trained to be commander to the Female Furies, an all-female team of super-powered mercenaries that serve Darkseid.

Barda and Scott met shortly before his escape from Apokolips. Scott's gentle nature and free spirit inspired Barda to defect from Apokolips and follow him to Earth. They later married and joined the Justice League. There aren't too many people that can get close to Big Barda, but the ones who do often manage to see beyond her hard exterior lies a woman longing for the simple life.

Big Barda, along with many other New Gods, was killed by the Infinity Man, Darkseid's brother. Mister Miracle, distraught at losing his one true love, sought revenge on her killer, only to die in vain. She was later shown reincarnating on a parallel Earth along with several other New Gods.

Barda was born on the planet Apokolis as a New God, being a product of Granny Goodness to serve Darkseid, and was groomed to lead the Female Fury Battalion. During a raid, Barda was greeted by Darkseid's adopted son, Scott Free, and fell in love with him due to his peaceful nature. Wanting to leave the battalion, Barda helped Scott escape from Apokolips, and managed to fight off Granny Goodness and come to Earth. Barda and Scott reunited and were married by Scott's father, the Highfather of New Genesis. After Scott took the title of Mister Miracle, Barda worked with him and Oberon and the group later moved to Bailey, New Hampshire to retire and move on with their lives. The group found disaster plaguing them, and decided to move to New York City, and Barda started a defense training program for women in Greenwich Village.

During this time, Barda is taken by Sleez and mind-controlled to force her and Supemran into an adult film, but the two were rescued by Mister Miracle. When Scott joined the Justice League of America, Barda participated in several missions with the team until the two decided to leave Earth for New Genesis. The two returned to take temporary refuge with the Justice League, and Barda becomes an agent of New Genesis alongside Orion for the league. Takion ordered Barda and Orion to do t his so they could mobilize Earth's heroes to fight against Mageddon, and the superheroes succeeded in stopping the old god.

When Superman gathered the Superman family to challenge Darkseid, Barda demanded to go with them so she face the New God, but Superman refused since Darkseid would retaliate if there was an non-Kryptonian. When Supergirl was kidnapped by Darkseid, Barda, Batman, Wonder Woman and Superman went to Apokolips to rescue her and fight the Female Furies. Later on, Barda joined the Birds of Prey, and was later killed by Infinity Man after dealing with Knockout and the Secret Six. During the Final Crisis, Barda was reborn on New Genesis, indicating that she wasn't dead or was revived by the New Gods.

On Prime Earth, Big Barda fell in love with Mister Miracle and defected from Darkseid after breaking free from Steppenwolf, and the two went into hiding. 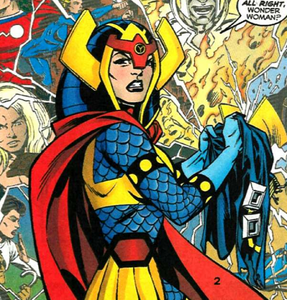 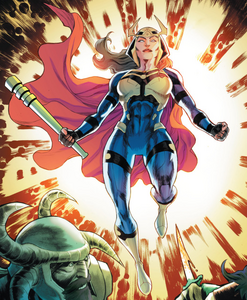 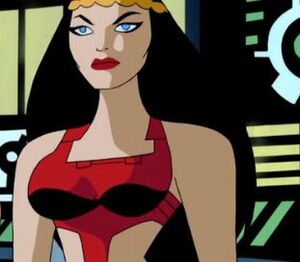 Big Barda in Batman Beyond. 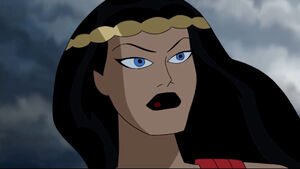 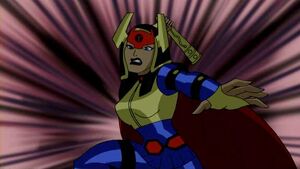 Big Barda with armor on DCAU. 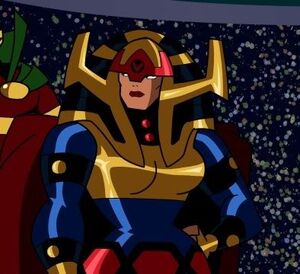 Big Barda in Batman: The Brave and the Bold. 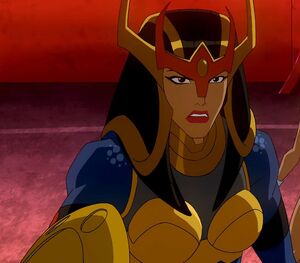 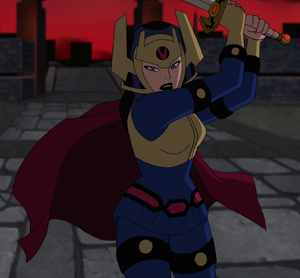 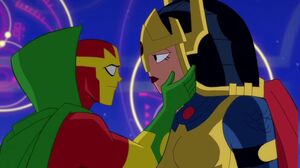 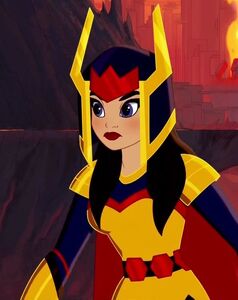 Retrieved from "https://hero.fandom.com/wiki/Big_Barda?oldid=2149842"
Community content is available under CC-BY-SA unless otherwise noted.