Big Convoy Is The New Maximal Leader and the primary Heroic antagonist of Beast Wars Neo.

Big Convoy leads his new maximal recruits to find and collect capules have scattered across the galaxy but he and his forces find themselves encountered Unicron in the dead body of Galvatron by Blendtrons.

(You don't want to give Big Convoy (ビッグコンボイ Biggu Konboi) a hard time. While most Maximal Supreme Commanders are known for their level-headed and friendly natures, Big Convoy breaks the mold by positively wrecking and ruining anyone who gives him lip. A gargantuan bruiser of a warrior, he tramples the opposition in his woolly mammoth beast mode and utterly obliterates them in robot mode with his Big Cannon. He is known throughout the Maximal ranks as "The One-Man Army," a solitary Supreme Commander who can do the work of a whole battalion all on his lonesome.)

So, of course, the Convoy Council felt he would make a perfect training instructor for a batch of new recruits freshly minted from the Maximal Military Academy. While it takes every ounce of restraint Big Convoy can muster not to completely throttle the green little twerps, deep down he kinda-sorta likes them. Or he's getting there, anyway. Vector Sigma has taken a special interest in Big Convoy and often speaks through him via the Energon Matrix in his chest. And with each lesson in warfare he imparts on his new recruits, Big Convoy, in turn, learns a lesson about friendship and teamwork.) 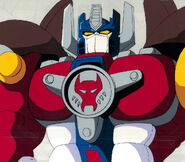 Add a photo to this gallery
Retrieved from "https://hero.fandom.com/wiki/Big_Convoy?oldid=1632387"
Community content is available under CC-BY-SA unless otherwise noted.