Protect and defend the citizens of San Fransokyo.

Big Hero 6 is a high-tech group of superheroes from the city of San Fransokyo in the 2014 animated film of the same name, as well as the subsequent television series.

Originally a group of students, the team was formed for the purpose of capturing the supervillain Yokai, the man responsible for the death of their friend (and Hiro's brother) Tadashi, and bringing him to justice. Thanks to the students' high intellect, the group built specialized suits based on the individual skills of each member, transforming themselves into high-tech superheroes.

After stopping Yokai's plot to kill Alistair Krei, they enter a hiatus with no intention of reforming their team (except Fred). It isn't until a new threat arises in the form of Mr. Yama that the team reluctantly jumps back into action and unanimously agree to officially establish themselves as resident superheroes and protectors of San Fransokyo. In doing so, they look to honor Tadashi's wish to help a lot of people.

Outside of the core six members, other characters have been irregularly affiliated with the team. Some of these include Fred's butler Heathcliff, who occasionally provides transportation via the Frederickson family chopper and limo. Mini-Max—essentially a miniature version of Baymax—was created as a guardian for Fred, and was given his own super armor to aid the team when necessary. Richardson Mole briefly joined the team after discovering their identities, but he was dropped after his memory was accidentally wiped.

Over time, the team would see occasional upgrades provided by Hiro to enhance their performance. In "Mr. Sparkles Loses His Sparkle", Hiro invents Skymax, which act as a remote-controlled transportation system for Big Hero 6's armor. Though there was initially only one Skymax, five more were created by the time of "Kentucky Kaiju". "Big Problem" introduced the team to Ultra Armor—titanium reinforced battle armor meant to withstand greater amounts of damage from enemies. In terms of appearance, Ultra Armor resembles the team's original suits, albeit with a slick, silver-gray metallic surface. 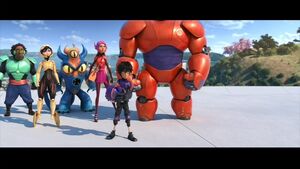 Big Hero 6 in the final scene 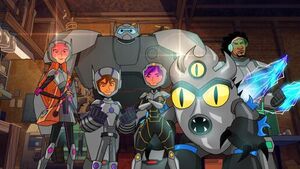 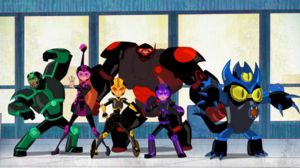