Big the Cat (ビッグ ・ザ ・キャット Biggu za Kyatto) is a fictional character from the Sonic the Hedgehog series. He is a large, anthropomorphic purple cat designed by either Yuji Uekawa, Takashi Iizuka, or even Naoto Oshima. Though physically strong and imposing of stature, Big is a gentle and easy-going, and somewhat dim-witted.

Big resides deep within the Mystic Ruins where he spends most of his time fishing in tranquility with his best friend, Froggy. Big is not one for going on grand adventures, preferring his peaceful and quiet lifestyle in the jungle. However, should his friends be in danger or in need of his aid, Big will not hesitate to help out and protect them in any way he can.

Big is a very large and burly anthropomorphic cat. The majority of his body fur consists of two shades of purple, light and dark. A striped pattern runs up his arms and tail. His feet are covered in dark purple fur up to his ankles as well as the outer tips of his large ears, while his upper legs, back, and sides are covered in light purple fur. White fur covers his chest, torso, and inner ears. He also has black eyes with pale yellow sclera.

His preferred attire consists of yellow gloves, sandals, and a matching belt with a gold buckle.

Big was sleeping peacefully in his hut one night, when he woke up and saw that his friend, Froggy, had swallowed his lucky charm: the yellow Chaos Emerald. As soon as he noticed that Froggy grew a tail, Froggy ran off, causing Big to chase after him. Big followed Froggy all over Station Square, from Twinkle Park to Icecap. Big was able to catch Froggy at Emerald Coast, but E-102 Gamma, a robot made by Eggman, snatched him from Big and ran off. Seeing that, Big tried to convince the robot to give him Froggy back, but without any positive results.

Later, Big went on board the Egg Carrier to once again reunite with his pal, Froggy. He had to fish him out of one of the many water tanks on the Hot Shelter. After finally catching Froggy, Big was teleported by Tikal into the past for a while, so she could pass him a message, just like she did to the other characters about Chaos, the god of destruction. In Big's case, he was shown just how important his "lucky charm" really was. When he got back to the present, he decided to try to get out of the Egg Carrier, but was caught by Dr. Eggman and Chaos 4, which then evolved to Chaos 6 when he absorbed Froggy (whose tail and Chaos Emerald had now disappeared). Just then, Sonic appeared to the rescue. Big merely had to fish Froggy out of Chaos 6, leaving the rest to Sonic once he rescued his buddy. After leaving Chaos to Sonic, Big found the Tornado 2 and decided to fly home with it, but crashed it near his house. However, that made the Chaos Emerald inside the Tornado 2 an easy target to Chaos when he was on a vicious rampage to gather all seven by himself. When Perfect Chaos destroyed the city of Station Square, Big gave one of the seven Chaos Emeralds to Sonic so he could go super and defeat Perfect Chaos.

He has an important role in Sonic Heroes. In this game he is the Power Type member of Team Rose and teams up with Amy Rose and Cream the Rabbit to find Froggy and Chocola who had recently vanished, supposedly kidnapped. After defeating the Egg Emperor on the Egg Fleet, the Eggman clone piloting the Mech turns into a puddle of liquid, and Chocola and Froggy rise out of it. He later joins the other teams in defeating the true villain behind Froggy's and Chocola's capture, Metal Sonic, by buying Team Sonic enough time to use the Chaos Emeralds.

Big is also a character in Sonic Chronicles: The Dark Brotherhood. He still maintains his somewhat slow and dim nature, but is an invaluable ally due to his ability to safely make it through harsh environments with his Invulnerability. He has a side-quest revolving around finding Froggy's friend Norton. In battle, he has superior strength, but slow speed, being granted only one turn per round.

Big makes an appearance in the DS version of Sonic Colors, yet again searching for Froggy. Having apparently followed Froggy into the Aquarium Park in Dr. Eggman's Incredible Interstellar Amusement Park, Big tries to search for Froggy at one of the rides, but has to clear a mission to be allowed to enter. He soon after meet Sonic and Tails, and explains that he is looking for Froggy. Sonic then says that he would help looking for Froggy by taking the mission. Sonic soon returns, but says he could not find Froggy, much to Big's disappointment. Big then asks if Sonic and Tails are hungry and they admit they could go for a bite to eat. As they ask Big what kind of snack he was thinking about, Big says fish and shows them a Chopper, much to their displeasure.

Big is later joined in his search for Froggy by Amy who is also trying to find Sonic. They soon run into Sonic and Tails, and Amy asks Sonic to entertain them by clearing a mission. After Sonic clears it, Amy offers to make a picnic for them, which Big eagerly asks if he can join them. He is also inspired to run after seeing Sonic, but Amy says he has to lose some weight first.

In Sonic Dash, Big makes an appearance as a playable character. In this game, he can be unlocked after being purchased online for $3.99 USD or in a special event. On 20 December 2019, Big was rereleased as Santa Big, a character previously featured in Sonic Forces: Speed Battle, as part of a Christmas event.

Big has an appearance in Mario & Sonic at the Olympic Games acting as one of the referees.

Big is carefree and laid-back. He cares a lot for his friends, especially Froggy. He enjoys fishing and brings his rod with him wherever he goes. He is often giddy and optimistic, especially when with his friends. However, he is not exactly the sharpest knife in the drawer, as important things sometimes pass right through his mind. This does not mean Big is stupid, however, but more so that he is a slow thinker. Despite this, he is loyal and reliable to his friends. He also dislikes how many people worry about so many little things and them hurrying about all the time, which is probably why he chose to live in the Mystic Ruins jungle without technology.

Big encourages others and is not the selfish type. Big has an ability to stay calm in any situation, even when he has lost Froggy. Big is amazed by a lot of things and is almost always upbeat, even when he is in danger. One of the only instances of the cat losing his upbeat nature comes in Sonic Heroes, when he momentarily loses hope of finding Froggy and sadly suggests going home before Amy rekindles his spirit.

Big is regarded as one of Sonic's strongest and toughest friends. He possesses a superhuman level of physical strength, enough to lift and throw entire cars and massive boulders larger than himself with little effort, shatter rocks and metal with brute strength, and even knock away objects with such force that they ignite fire.

Due to his large size, Big does not possess any superhuman speed or agility. However, as demonstrated in Sonic Heroes, he capable of running at rather high speeds by normal standards. He also has enough agility to grind on rails.

Big has extreme amounts of toughness and durability due to his bulk. When struck by attacks, Big's bulk will cause most strikes to just bounce right off him, and he can in some cases, when giddy enough, not even feel the attacks at all, making Big nearly impossible to be taken down. Big's toughness also makes him impervious to conditions and substances that would otherwise be hazardous to normal people such as poison gas, waters well below sub-zero temperatures, and harmful energy barriers.

Big is a very capable swimmer as seen in Sonic Adventure and Sonic Adventure DX: Director's Cut, being able to swim to far depths and through underwater grottos and even walk on the bottom of pools like he is walking on dry land. Big also seems to have rather advanced climbing capabilities, given how Big is able to appear in high places where there is nearly no means of climbing up there.

When not using his Fishing Rod, Big can attack by using Body Press, where he drops his entire body down on enemies, crushing them and create powerful energy shockwaves. In Sonic Heroes, Big could also perform variants of the Spin Attack, such as the Spin Jump, where Big can leap into the air and curl into a spinning ball to deal damage to anything he lands on, and the Homing Attack, where Big jumps and home in on an enemy to attack. He can also use his Battering Ram to knock down opponents.

Due to spending most of his time fishing, Big is a highly experienced fisherman, being able to fish just about anything up from the waters with his Fishing Rod, ranging from regular fish of various shapes and sizes to hostile robotic Choppers and even Froggy when he's under the influence of Chaos.

Big has an excellent sense of smell. As seen in Sonic Heroes, Big was able to catch Froggy's sense while the frog was presumably held capture deep within Bullet Station, which was an impressive feat given the large amount of distance between them at the moment. Big's main weakness, his low intelligence, is also a strength in certain situations, such as in Sonic Chronicles: The Dark Brotherhood, where Big's simple way of thinking was the reason why he was immune to Voxai mind control.

Big also appears to have some skills with machinery despite his nonurban habitat, seeing as he flew Tails' Tornado 2 from Eggman's airship and managed to land it safely, and in his cameo appearance as a character in Sonic Adventure 2 in two player mode, where he is piloting Eggman's mech.

By harnessing different variants of Hyper-go-on from Wisps, Big can use specific Color Powers to transform into a certain form, such as a drill, a laser or even a planet, each one possessing its own unique abilities. So far, Big has been able to transform into the Cyan Laser, Yellow Drill and Indigo Asteroid. However, these transformations require a steady supply of Hyper-go-on to be maintained. 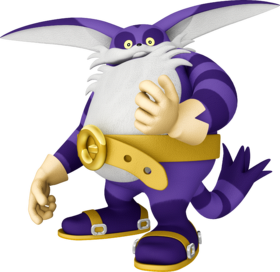 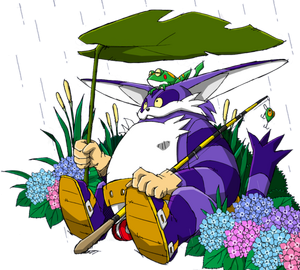 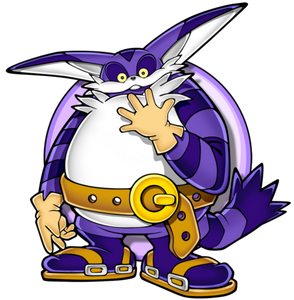 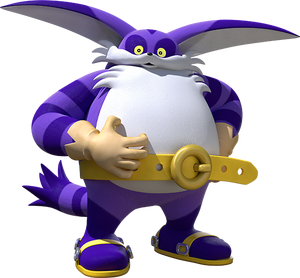 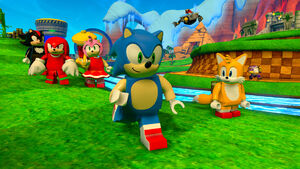 Retrieved from "https://hero.fandom.com/wiki/Big_the_Cat?oldid=2277527"
Community content is available under CC-BY-SA unless otherwise noted.