The Wolf Among Us

Sheriff Bigby Wolf, also known as The Big Bad Wolf, is a central character in the comic book series Fables, and the main protagonist of Telltale's video game and Fables prequel The Wolf Among Us.

Bigby is a fable and the big bad wolf of lore that terrorizes and even killed several fairy tale characters through out history. He now serves as the Sheriff of Fabletown, protecting all the Fables forced to live in there in an attempt to redeem himself of his past horrible deeds.

In The Wolf Among Us, he is voiced by Adam Harrington.

Bigby is the son of North Wind and Winter Wolf alongside his numerous siblings who were born two seasons following his parents meeting, but North Wind would return home, leaving Winter heartbroken. In his youth, Bigby was bullied by his brothers for being the runt of the litter, and they would give him the name "Bigby" from shortening the "Big Bad Wolf". When their mother died, Bigby stayed at his mother's corpse while his brothers went to look for their father. Bigby failed to save his mother's remains from scavengers, leading to the wolf to swear vengance to one day find and confront North Wind. Seeing that he needed to become stronger due to his small size, Bigby swore to eat anything bigger than him so he could be stronger and larger when he confronted his father.

In the homelands, Bigby started to hunt the three little pigs, but seemingly failed to eat all three since they were still alive by the Exodus event. Afterward, he went on to hunt humans for food, first going after Red Riding Hood and her grandmother, but the Woodsman would save Red Riding Hood by cutting open the wolf's stomach. Though thrown into a river to drown, Bigby managed to survive by holding his breath, a gift he inherited from his father. Despite his failure to eat Red Riding Hood, Bigby was successful in eating other humans to the point that he grew large and strong enough to confront North Wind.

Bigby would fail to defeat his father seven times, and gave up on his crusade. The wolf would continue to hunt down humans, and when coming across a few, freed Snow White from her shackles, and was impressed when she wasn't afraid of him.

Once he fled from the homelands, Bigby would wonder across Europe and continue his carnage, but his bloodbath was blamed on the Count by locals. He would later encounter Snow White and Feathertop, who promised him safe passage in the new community, and she cut him with a stained knife that allowed Bigby to shift into human form. He was then given the positiohn of sheriff due to his detective skills, fighting skills and intimidating personality. Due to his previous actions in the homelands, many Fables didn't trust him initially.

The Wolf Among Us

In The Wolf Among Us, Bigby Wolf is the sheriff who deals with cases and maintains the peace between each Fables despite most of them not trusting him. When Faith is murdered by an unknown culprit, Bigby's investigation leads him to discover the corruption within the community.

Bigby is a hard and cold person, because of his experiences in the fairy-tale Homelands and formerly being the most notorious fairy-tale villain to many of the Fables. His violent past causes him to be despised by many in the Fable community. However despite his coarse nature he seems to truly want to atone for his past misdeeds and takes his role as Sheriff of Fabletown very seriously. He also cares very deeply about the safety and well being of the other Fables, espescially Snow White, whose kindness and love was enough to turn him from his evil ways and become the protector of Fables that he now is. 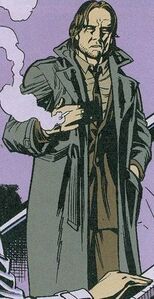 Bigby in the comics. 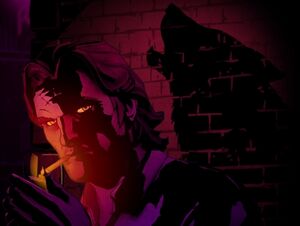 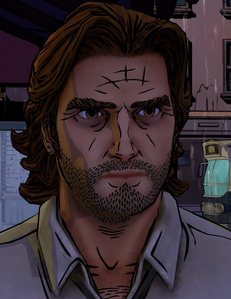