He was created by the late Stan Lee, and the late Don Heck.

William Foster spent his childhood in the Watts ghetto. His natural intelligence and the influence of several good people helped him leave the ghetto and attend California Technical Institute, but not before enlisting in the military. He saw combat in southeast Asia, where he made an enemy of CIA operative Geoffrey Ballard, later the rogue super-agent known as the Centurion.

As a student, Foster worked toward a degree in biochemistry and met and married Claire Temple, a medical student. Upon graduation, he worked his way up the corporate ladder at Stark Industries, but his drive for success strained their marriage to the point of divorce.

When the scientific adventurer Henry Pym was trapped at a minimum of ten feet in height, Tony Stark recommended that Foster assist Pym in finding a cure. For several months they worked together in Pym's laboratories in New Jersey and the Avengers Mansion, although Foster often became embroiled in the Avengers’s cases, such as surviving attacks by the Sons of the Serpent and helping to thwart Whirlwind’s attempt to kill Pym and the Wasp in order to claim their estate. The two scientists eventually found a cure.

Foster returned to Stark Industries, where he was promoted to head of the biochemistry division at Stark Industries' Los Angeles plant. Fascinated by Pym's research, Foster synthesized the growth compound, hoping to eliminate any side effects. Eventually Foster tested the formula on himself and found he had successfully duplicated Pym's growth powers. Taking a vacation from his duties at Stark Industries, Foster devised a plan by which he might win back the affection of his ex-wife, Claire Temple.

He wrote her about how he had worked with Pym and duplicated his powers but deceived her into believing that, like Pym, he was also trapped at giant stature. She agreed to meet him to see what help she could provide. They met at a traveling circus where he said he had to work in order to earn money to continue his research. Foster had outfitted himself in a costume and billed himself as "Black Goliath."

Claire's current boyfriend, Luke Cage (then known as the hero Power Man), had followed her, and the two men fought over her. They settled their differences long enough to join forces against the Ringmaster and his Circus of Crime, which Foster had unwittingly joined. Ultimately, however, Claire chose to remain with Cage rather than her ex-husband. Ashamed, Foster returned to Los Angeles.

Although he had fashioned a costumed identity for himself, Foster was uncertain whether he should use it to fight crime, considering the circumstances in which he fashioned it. With the encouragement of Henry Pym, he decided to try. On his first outing, Foster encountered the criminal Atom-Smasher (Ronald English), who bombarded him with deadly radiation. This bombardment immediately produced painful side effects, making his size transformations difficult and causing him to occasionally black out.

Before Foster was able to defeat the Atom-Smasher, his foe was killed by a mysterious assassin that later turned out to be Atom-Smasher's brother, the second Atom-Smasher. Ignoring the symptoms of radiation poisoning, he continued his career, battling such menaces as Vulcan, the Stilt-Man, and the Hijacker, and aiding the Champions and the Thing. After some time, Foster changed his code-name to Giant-Man. 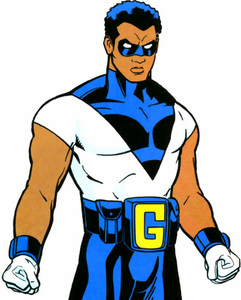 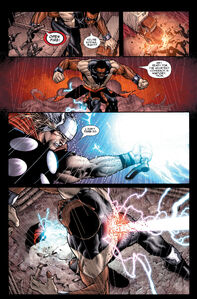 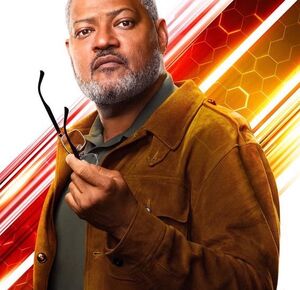 Laurence Fishburne as Bill Foster in the MCU.
Add a photo to this gallery

Retrieved from "https://hero.fandom.com/wiki/Bill_Foster?oldid=1774802"
Community content is available under CC-BY-SA unless otherwise noted.