William "Bill" Barrett Foster is one of the anti-heroic secondary antagonists of the 2018 superhero film sequel Ant-Man and the Wasp. He is a former colleague of Hank Pym and the surrogate father of Ghost.

He was portrayed by Laurence Fishburne who also played Morpheus in The Matrix trilogy, voiced The Silver Surfer in Fantastic Four: Rise of the Silver Surfer, Perry White in the DC Extended Universe, and Jack Crawford in Hannibal TV series. Langston Fishburne also portrayed the character younger.

Bill was a biochemist who was a former colleague of Hank Pym, having worked alongside him with Project G. O. L. I. A. T. H.. At some point in time, he was introduced to a young Ava Starr who had lost her parents when her father attempted to continue his experiment in spite of being discredited by Hank. Ava survived the explosion, but her body cells were gravely split in half, giving her the ability to phase through objects, but at the cost of her slowly dying because of it. Bill had since become a surrogate father for her, and had spent a duration of his life finding a cure for her condition.

When Scott Lang and Hank Pym are working on a new portal to save Hank's wife Janet from the quantum realm, they (along with Hank's daughter Hope) were captured by Ghost, and Bill reveals himself to be working with the Ghost. The two try to steal Hank's shrunken lab so that they could use his technology to cure Ava. However, when informed that they could potentially end up killing Janet by potentially absorbing quantum energy from her, Bill is willing to take that risk as he still cares for Ava. Despite being more than willing to steal his former colleague's technology, he immediately berates Ava on her suggestion to abduct Scott's daughter Cassie.

As Lang and Hope were forced to fight off Sonny Burch and his men from stealing the lab, Ava successfully recaptures the lab and begins to perform the experiment on herself. When Bill attempts to speak her out of this, Ava rashly throws him across the room. However, this is stopped when Pym and Janet return from the Quantum Realm, and Janet heals Ava's ailment by giving her some of her quantum energy. As Ava was attempting to escape, she suggests to Bill that he leave her because he hadn't committed any crimes she had done through S.H.I.E.L.D, but Bill refuses to leave her side. The two embrace before they both escape the authorities.

Though it would've seem that Bill has achieved his intent in curing Ava, it turns out that the cure is temporary as Lang and the Pym family are working on the quantum realm to find a more permanent solution for Ava's condition. Unfortunately, the Pym family ends up being killed by Thanos' death wave while Lang ends up trapped in the quantum realm, much to his distraught. It is unknown whether Bill has perished away to his death by Thanos' death wave alongside half of the universe' populace or not. 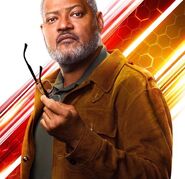 Retrieved from "https://hero.fandom.com/wiki/Bill_Foster_(Marvel_Cinematic_Universe)?oldid=1679800"
Community content is available under CC-BY-SA unless otherwise noted.