Defend their base on Katina from an enemy mothership.

Bill Grey is one of the heroes from the Star Fox games. He is a Cornerian fighter pilot and was Fox McCloud's childhood friend.

When he was young, Bill Grey was good friends with Fox McCloud. His childhood friend convinced him to join the Cornerian Army. After a few years after Fox learned the tragic news about what happened to his father from Peppy Hare, Fox left to avenge his father's death and Bill later commanded both the Husky and Bulldog units.

Bill is first seen at Katina fighting off Andross's forces trying to defend the Cornerian base from being destroyed. Star Fox arrived at the scene to back them up. Fox was very happy to see his old friend again for the first time since he left the Academy to become the leader of Star Fox. If Fox shoots down one of his allies, Bill will berate him for it. He later detects an approaching enemy mothership and they later engaged with further attacks. Bill frequently lets the Team know if the hatches have opened so they can destroy them. If all four hatches are destroyed or if Fox takes too long to destroy them, Bill notices the enemy's core and urges Fox to destroy it. If Fox fails to take out the core before time runs out, Star Fox, Bill, and his army are forced to flee as the enemy ship destroys their base, with Fox feeling upset about letting his friend down and take a route to Sector X. If Fox succeeds in destroying the core before they run out of time, Bill will shout "Yee ha! You did it!" and the mothership will fall to the ground bursting into flames, destroying it forever and Star Fox will take a route to Solar. If the player goes to Solar from Katina, Bill will appear and deliver helpful items before promptly leaving, as his ship isn't able to handle the extremely high temperatures like the Star Fox Team's Arwings can. If the player chooses to go to Sector X from Katina instead, Fox will have to turn left to join Falco. By doing so, Bill will arrive to help with shooting the panels, which by opening all of them will trigger a warp that will transport Fox and his team to Sector Z. He will be seen in the credits flying alongside Fox if the player went to Katina.

After a long absence, Bill makes his return when the Anglar Empire invaded the Lylat System. Bill is also on good terms with Falco and Slippy, who would come to his assistance on the planet (if the two choose to help him out at Katina). There he tells them about a pilot in question who had joined with the Cornerian Air Force, and Slippy refused to believe it was Krystal. While Bill doesn't know much about Fox's relationship with her, what he does know is that she recently joined Star Wolf, as she was deeply hurt when Fox dismissed her from the team. After the dust clears, Bill tells the two to say hello to Fox for him if they see him again. However, it seems likely that these events are non-canon. 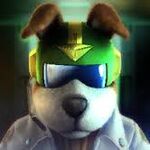