William "Bill" Robinson is man from North Carolina who had problems in his past and owed some money to someone and had to turn to robbing a grocery store in Charlotte for money and was arrested. He spent a few years in prison and got paroled. Now an ex-convict who works at the Dixie Boy Truck Stop outside Wilmington, North Carolina. He works for a very mean and shady boss Bubba Hendershot who has some other ex-cons working there at the truck stop. Bill is forced to work 9 hour shifts even though it is only for 8 hours. Some weird things start to happen, an electrical knife turns on by its self and cuts Wanda June, one of the waitresses and a gas pump shoots gas into the eyes of Duncan Keller, one of the attendants at the pumps. Bill takes a hammer and hammers it. More weird things happening with the machines and a video game electrocutes a man.

Bill would meet a woman named Brett Graham, who was hitchhiking to Florida with Camp Loman giving her a ride. Camp Loman is a bible salesman who tried to have his way with Brett while on the road. After they into the truck stop, Camp was yelling at Brett and Brett sees the Happy Toyz Truck coming at them and they get out of the way. While inside, Handy, who is the driver of the truck still has his keys on him. Bill goes to investigate and only finds a jack-in-the-box in the truck. Brett talks to Bill about everything being quiet.

Joe, one of the attendants at the pumps sees Duncan attempting to leave to find his son Deke, and Bill checks to see Duncan's vision, but no matter what he wants to go. Bubba Hendershot tells him about leaving and not having a job if he leaves and Duncan tells him off. Bill defends Duncan just as Handershot was going to go at Duncan. Duncan is killed by one of the trucks and the truck hits Camp Loman's car and is pissed. Camp goes outside and the Green Goblin Truck slams the survivor Camp Loman to a creek, before all trucks circle the Dixie Boy to trap all humans.

Later on, Bill, Brett and the others see a couple in a car trying to get into the truck stop. Curtis and Connie, the newly married couple manage to barely make it in with the help of Bill. Bubba Hendershot uses a M72 LAW rocket to destroy two of the trucks coming at them. Bill asks where he got them, Joe is about to tell Bill, but Hendershot tells him to shut up and responds he fond them in his Christmas stocking. Bill and Brett discovers an arms room in the Dixie Boy cellar (also the room where the dead body is stored). Hendershot arrives, wondering if there's money from the body and told Bill to stay "obtuse". Brett wants to escape the Dixie Boy and told Hendershot they don't steal anything. Hendershot explains Brett that Bill was a thief in a Charlotte grocery store. He tells the two that he will call someone, and Bill guessed it would be the police (despite that most other humans are already wiped out). With Bill tired of his argumentative confrontations with Hendershot, the latter warns Bill, and Bill responds by warning back and equipping a firearm. Still believing in a terrible fate coming to Bill, Hendershot leaves the argument.

Later on that night, they hear a noise and think that maybe it is Camp Loman, that he is alive. Bill and Curtis make it to the other building and use the sewer and save Deke, who made it their alive from Camp Loman. Deke asks Bill what happened to Duncan, his father. Hendershot answers by saying that he is killed by a truck, in a rude explanation. Brett defends Deke, although he is told by Bill that the death is true. Noticing how it impacts Deke, Brett slaps Hendershot for terrifying him.

On the next day, a bulldozer shoves a car into the Dixie Boy. Hendershot is again using the M72 LAW rocket, just to destroy the vehicle. He is able to destroy the bulldozer, despite of warnings from the humans towards the weapon's powerful strength. Hendershot cheers on the destruction of his target, but he gets gunned by an M60 gun from the M274 Mule. Wanda June goes crazy and is shot by the M274 Mule, but getting a shot off of the M72 LAW rocket, blowing up the Miller Beer truck. The M274 Mule, honking in Morse Code, telling the humans they will fill all the vehicles with gas. The day is long and Bill, exhausted, rests up. Later on, Bill and Andy, one of the other truckers are talking. Bill has a grenade and tells him to run and Bill blows up the M274 Mule. Later on hat night, Bill then leads the party out of the diner via a sewer hatch to the main road just as the trucks demolish the entire truck stop. The survivors are pursued to the docks by the Green Goblin truck, which manages to kill Brad the trucker. Robinson destroys the truck with a direct hit from an M72 LAW rocket shot.

Green Goblin Truck telling Bill to give them more gas.

Bill Robinson tells the Green Goblin Truck he has gas for them. 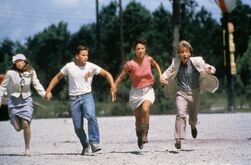 Bill Robinson and Brett Graham save the married couple Curtis and Connie from the trucks.

Bill Robinson and Andy escape from the M274 Mule.

Bill Robinson blows up the Green Goblin Truck.
Add a photo to this gallery

Retrieved from "https://hero.fandom.com/wiki/Bill_Robinson?oldid=2248816"
Community content is available under CC-BY-SA unless otherwise noted.