Protector of the Innocent
Birdy Cephon Altera (Birdy The Berserker Killer) is the main female protagonist of the 1985 manga called Birdy The Mighty and the 2008 anime called Birdy The Mighty Decode. She is a intergalactic cop who chases down interplanetary criminals across the galaxy and does her best to uphold the intergalactic laws between her home world, Earth and other worlds.

She was voiced by Saeko Chiba in the Japanese version, and by Luci Christian in the English dubbed version.

Birdy is a very fit individual because of what her job requires of her and she is very beautiful. She has orange (or pink) hair with white streaks running down the back. She wears a purple and white outfit which covers up her breasts (mostly) and her private parts but other than that she shows a lot of skin. Her outfit is skin tight but acts as if she is not wearing anything at all and it acts like it's a part of her skin which lets her move faster and be more flexible than human type outfits.

Whenever Birdy is not hunting down criminals and stopping dangerous threats, she dyes her hair completely brown and tends to wear girly clothes and make-up (which she hates) to blend in with Earth's society. In fact her fake identity, Shion Arita, is a rising Japanese idol and does a lot of photo shoots and participates on t.v shows which helps her raise up enough money to help pay for her rent and necessities as she lives with another alien in Japan.

She is usually very nice and happy but she does have a small temper and whenever she gets pissed off, just be ready for some quick destruction.

Birdy also loves to joke around especially with Tsutomu and his girl problems but she can give good advice. She is usually laid back whenever she is not hunting down criminals but whenever she is she takes it very seriously. She also doesn't want to kill anyone unless she really has to.

Birdy is able to perform a lot of superhuman feats. She is able to run faster than a speeding car, jump great distances, and can fall off a tall building and crush whatever is beneath her without getting hurt. She also has superhuman strength which ables her to punch through walls or enemy bodies and can defend herself pretty well. Also, human weapons are useless against her unless there is big enough firepower or a lot of it but other than that she is almost invincible.

Birdy comes from a planet called Altaria which is similar to Earth but is more advanced in technology. The race that Birdy comes from are called Altans and are similar to humans but there is something that differentiates Birdy from other Altans. Birdy is a bio-engineered super soldier called Ixioran Altan, a being who is bred for combat.

Birdy was never taken care of by her parents but by a robot when she was growing up. The robot was called Violin, who Birdy saw as a mother figure. Birdy would always hallucinate that Violin would show emotion and that she was actually real which was not the case and since she was always stuck inside training, Birdy would feel alone and sad at some points and just see things that weren't really real.

Sometimes Birdy would sneak away and would play with her only friend, Nataru, but after a certain tragic event they both wind up on separate paths which comes into play in season 2.

When Birdy was only 10 years old she happened to get caught up in a terrorist attack at Central Tower, a well known landmark on her planet. In order to protect Birdy, Violin fought against a great war machine called a Berserker, which are known for being hard to defeat, and died. After witnessing the death of Violin, Birdy went berserk and defeated the machine which gave her the name of "Birdy The Berserker Killer". 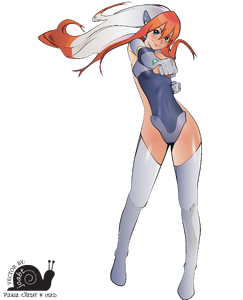 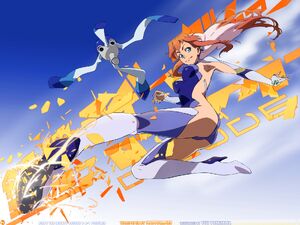 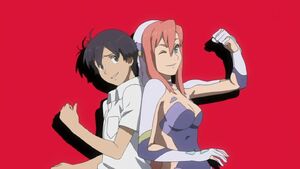 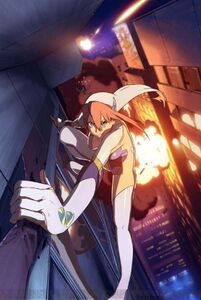 Birdy the Warrior
Community content is available under CC-BY-SA unless otherwise noted.
Advertisement