Bishop (real name Lucas Bishop) is a fictional character and superhero in Marvel comics and its universe, and appears mainly in the X-Men comics. He is an alpha-level mutant who has the ability to absorb energy and direct it towards his targets, and possess other abilities such as letting his "spirit go".

Bishop was a member of Xavier's Security Enforcers (initially called the Xavier School Enforcers), a mutant police force from a dystopian future of the Marvel Universe. He traveled to the 20th century and joined the X-Men, a team he knew only as legends. A brash antihero, he had difficulty adjusting to the norms of the time period. After a decade and a half of acting as a member of the team, Bishop was instead portrayed as one of the X-Men's main antagonists.

He was created by Whilce Portacio and Johny Byrne, and first appeared in Uncanny X-Men #282 in November of 1991.

Bishop made frequent appearances in the X-Men animated series of the 1990s, and the 2009 animated series Wolverine and the X-Men. Bishop is portrayed by Omar Sy in the 2014 film X-Men: Days of Future Past, who also voiced Hot Rod in Transformers: The Last Knight.

Lucas bishop was a mutant born in the 21st century on the alternate timeline of Earth-1191, where the Sentinels had taken control of North America. He is the son of Burnum and Kadee Bishop, the brother of Shard Bishop, and the great-grandson of the mutant Gateway. In this timeline, the X-Men were killed by the Sentinels, and the other mutants were either killed or imprisoned within the "mutant relocation camps". Lucas and Shard were both born in a mutant relocation camp, and were branded with "M" tattoos over their right eyes for identification.

Eventually, mutants and humans joined forces and overthrew the Sentinels in the "Summers Rebellion", however, humans still resisted coexistence with mutants. Lucas' parents were both killed during the rebellion when he was seven, and after being separated from his sister and grandmother, made his way to Manhattan. Bishop met with the Witness, who raised him for a time, teaching him how to be a thief. Lucas eventually reunited with his sister and grandmother in Las Vegas, and their grandmother told them stories about the X-Men and instructed them to follow in Xavier's beliefs of peace between mankind and mutant-kind.

One day, two X.S.E. members were pursuing Virago, who was a member of the radical group of mutants called the Exhumes, and took Shard hostage. Lucas leaped onto Virago's back, and the radical mutant was shot in the head by Sureshot. Lucas had regarded the X.S.E. as his enemies and the Exhumes as heroes, but after the incident with Virago, changed his belief and wanted to join the X.S.E. Another day, Bishop unlocked his mutant powers when trying to protect his sister from two criminal mutants named Billboy and Halftrack, but the two were killed by X.S.E. members Amazon and Recoil.

Amazon and Recoil offered Bishop a position in the X.S.E., and he accepted on the condition that Shard be accepted as well. The two siblings became cadets at the X.S.E. academy under Hecat'e's supervision, and Lucas met his future enemy, Trevor Fitzroy. Lucas and Shard became officers, but the latter became Bishop's commanding officer since Lucas wanted to stay lower rank to work on the streets. Some time after, Shard was ambushed by the creatures known as Emplates, which were set there by Fitzroy. Shard turned into one of them, and Lucas was forced to kill his own sister rather then let her live as an Emplate.

Shard's essence was transferred into a holographic matrix projector that Bishop wore on his wrist, and left the X.S.E. to work for Witness in order to receive technology. After returning to the X.S.E., Bishop hunted Fitzroy again and discovered remnants of the X-Men, which was a garbled message from Jean Grey warning about a traitor.

Fitzroy broke free and escaped with other mutant criminals back through a time portal to the X-Men's time, and Bishop and his friends Malcolm and Randall followed. The three eventually found and killed the criminals known as the "Lifers", but Malcolm and Randall were killed and Bishop was severely wounded. He was taken to the Institute to recover, and Lucas defeated Fitzroy moments before he could complete his task.

Lucas joined the X-Men, but his methods caused him conflict with Storm, and most of the team was weary of him since he accused Gambit. During a mission to stop Legion from altering history, the team were unsuccessful, which triggered the Age of Apocalypse. During Apocalypse's age, Bishop grew older and saw the world change, and retained memories of the incident and beforehand. Magik and Destiny sent the elder Bishop to stop Legion, and briefly confronted his younger self, and told him to remember this day. The elder Bishop stopped Legion, and both appeared to be destroyed by Legion's psionic energy. 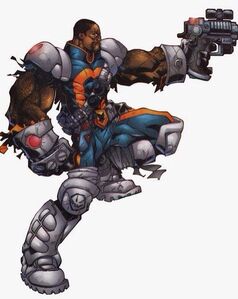 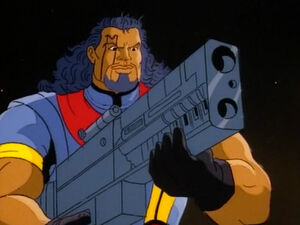 Bishop in the X-Men animated series. 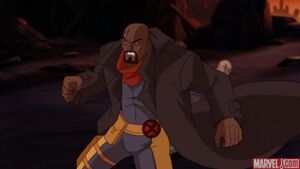 Bishop in Wolverine and the X-Men. 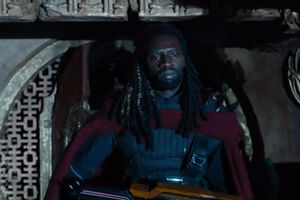 Bishop in X-Men: Days of Future Past.