A chief agent of the Utroms, the Turtles' ally

Bishop is a supporting hero in the 2012 incarnation of Teenage Mutant Ninja Turtles. He is an ally of the Ninja Turtles. As one of the main members of the Utrom High Council, Bishop is an Utrom from Dimension X who was responsible for designing and creating the Norman disguises (which the Kraang Hive Mind copied). As the brother of Kraang SubPrime (formerly known as Knight), he helps the Turtles first to prevent the Triceraton Empire from unleashing a planetary invasion on Earth (as well as the upcoming Kraang Invasion). Now that he is helping out the Earth more, he has become the leader of the Earth Protection Force and has provided them with some Utrom technology, to better prepare them for alien threats in New York City.

Bishop is voiced by Nolan North.

Nexons ago in Dimension X, Bishop became a part of the Utrom High Council in an unknown time period, alongside with his brother, Knight. At some point, he even designed the Norman disguises, which later on became the disguise he started to become known for. Bishop also met Professor Zayton Honeycutt, a D'Hoonibian from the planet, D'Hoonib (who later on became responsible for the creation of the Heart of Darkness). At some point whatsoever, the Utrom alien race almost became extinct when an Utrom scientist, Kraang, mutated himself once he discovered the Mutagen from the Kraathatrogons. Alongside with his mutation, Kraang use his profound telekinetic abilities to corrupt most of the Utroms to his "Kraang Hive Mind", becoming known as The Kraang. One of these Utroms was Knight, who became Kraang's, now renamed Kraang Prime, second-in-command. Ever since then, Bishop has been trying to convince his brother to join back with Utrom High Council, even though the former now considers the latter as a traitor.

Initially perceived as hostile for being a Kraang, Bishop explains his background as an Utrom, and how the Utroms are a peaceful group of Kraang who defected and how they oppose the Kraang Hive Mind. Bishop, who uses a Norman suit, explains that he was the original designer of the Normans. He also reveals that Kraang Subprime was himself once an Utrom, but defected to the Kraang. Bishop wins over the Turtles' trust and helps them fight against the simultaneous invasions of both the Kraang and Triceratons.

It was later revealed that Bishop had escaped from the Triceraton attack on the Technodrome by riding Leatherhead to shore. He rejoined the Turtles to help them disable the Heart of Darkness. However, the Triceratons destroyed Bishop's suit and he scuttled off.

The War for Dimension X

Bishop encounters the Turtles again, but this time, in Dimension X. Given how this encounter takes place months before Annihilation: Earth, this is technically the first time Bishop meets the turtles.

At a military base, Bishop speaks to the general in charge named General Griffen, explains Tokka to him, and knows that Tokka would only come to Earth for certain reasons, even when the general asks for Utrom assistance to deal with Tokka.

Later at the TCRI building, the Turtles team split ways to find the solution to deal with Tokka. However, Mikey and Casey are soon confronted by EPF soldiers, who immediately deem them hostile and attack them with smoke grenades. As for Leo, Raph, and Donnie, they find all the captured Kraang Stealth Ships and commandeer one, but are soon attacked by the EPF soldiers and surrounded, but Bishop gets them to stand down, before explaining how he has become an ambassador to Earth to help the EPF increase their defenses against alien threats. However, when Raph reveals Chompy, Bishop is horrified they brought him to Earth and demands they hand him over, but Raph refuses. To make matters worse, General Griffen has ordered the commander and his troops to apprehend the Turtles. Bishop tries to overrule him, but the commander refuses to defy Griffin's orders, leaving Bishop to deal with the troops while the Turtles take another Kraang Stealth Ship to take Chompy back to Tokka.

Bishop finishes off the troops engaging him, before contacting the troops engaging Tokka and orders them to withdraw, but once again, orders from General Griffen overrule him. Bishop confronts Griffen about this, but after Bishop defeats the troops, Griffen faces him personally.

After the situation with Tokka has resolved, Bishop holds his ground against General Griffen, but because of the former's actions, Griffin considers ending the agreement with the Utroms and Dimension X. Before he can finish off Bishop, he's tasered by Casey, knocking him out, allowing Casey, Mikey, and Bishop to celebrate.

Bishop is a Kraang Norman who wears shades to differentiate himself from other Kraang droids. Likewise, his Kraang form looks exactly like a normal Kraang.

Bishop is an technical genius as he is directly responsible for creating the Norman disguises and other Utrom technology. Likewise, he is very formidable when it comes to combat. On several occasions, Bishop can easily subdue the Turtles in a fight, as well as is capable of taking on hordes of Kraang, Triceratons, and Earth Protection Force alike. Also, he wields a pair of Utrom Laser Pistols as his signature weapons of choice.

Bishop is a helpful and caring Utrom. He made a Utrom vow not to deal with Earthly matters but broke it to warn the turtles about the Triceratons. 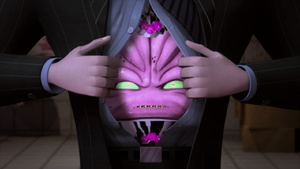 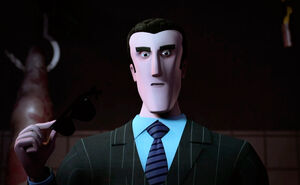 Bishop takes off his shades while explaining to the turtles that he isn't evil. 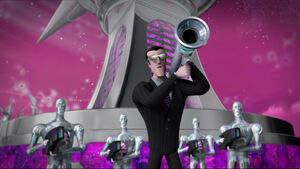 Bishop fighting Kraang alongside the Utroms. 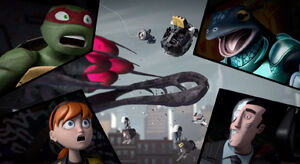 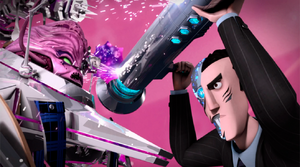 Bishop fighting Kraang Subprime in The War for Dimension X 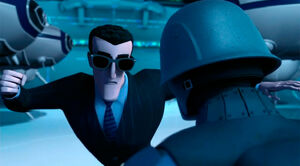 Retrieved from "https://hero.fandom.com/wiki/Bishop_(TMNT_2012)?oldid=1994529"
Community content is available under CC-BY-SA unless otherwise noted.