Start a Wiki
Bithiah was an Egyptian princess and the daughter of a Pharaoh according to The Old Testament. Although the name of her father is not stated in Exodus, it is specified he was a Pharaoh. Rabbinic interpretation Midrash of her Hebrew name states that since she took Moses in as her son though she did not give birth to him, so does God adopt her as his own daughter, naming her Batyah. The Bible and Midrash both assert that she was the mother of Moses, having drawn him from The Nile and bestowed upon him his name, which in Hebrew meant "drawn out". In Jewish tradition, she was exiled by The Pharaoh for bringing Moses The Levite into the house of Pharaoh and claiming him as her own child. Bithiah left Egypt with Moses when he ran away after killing an Egyptian slavedriver. She married Mered The Judahite. Her children were Miriam, Shammai and Ishbah, the father of Eshtemoa. A Scottish legend tells about a daughter of a Pharaoh named Scota, who refused to persecute the Israelites and was banished at the time of the Exodus. She was married to a Greek prince and they settled in Scotland. Their son founded Ireland.

In The Bible and Midrash

In the book of Exodus the daughter of Pharaoh who rescued Moses is not named. A daughter of Pharaoh named Bithiah is mentioned in I Chronicles 4:18. The Midrash identifies the two as the same person, and says she received her name, literally "daughter of Yah", because of her compassion and pity in saving the infant Moses. It relates in Leviticus Rabbah 1:3 of how God said He will take her in and call her Yah's daughter which is what “Bithiah“ meant because she took in a child not her own and called him her son "Moses" is thought to be derived from "child" in Egyptian. The Midrash also portrays her as a pious and devoted woman, who would bathe in The Nile to cleanse herself of the impurity of idolatrous Egypt. She is mentioned in I Chronicles 4:18, as being the wife of Mered from the tribe of Judah, who is identified in The Midrash as being Caleb, one of the 12 spies. The Midrash in Exodus Rabbah 18:3 also records that she was not affected by The 10 Plagues and her son was the only firstborn of Egypt to survive the final plague.

In the Hadith, Bithiah is known as Asiya, one of four of "the best of women". She is also known as The Pharaoh's wife, not daughter, in The Qur'an. When Moses was born, his mother put him in an ark and placed it in the river. When this ark reached The Pharaoh's palace, the courtiers took it out and got it opened before The Queen. The wife of Pharaoh was very much surprised to see a handsome and lovely child and took him in her arms. When Pharaoh came to know about it, he stepped forward to kill the child, but Asiya stood in the way saying:

"Why do you kill this innocent child, the whereabouts of whose parents are not known!"

Pharaoh changed his mind and Moses's biological mother was appointed a wet nurse in the palace until he grew up. When Moses preached the true faith, Asiya believed in him, provoking the Pharaoh to persecute her. Muhammad praised the piety and virtues of Asiya, who was subjected to unbearable tortures yet was steadfast. She was nailed to a board with either iron nails or wooden stakes piercing her wrists and ankles and flogged in blazing desert heat on The Pharaoh's orders. She laid down her life, but did not forsake her faith in The God of Moses.

"And God sets 4th, as an example to those who believe the wife of Pharaoh. Behold she said "O my Lord! Build for me, in nearness to Thee, a mansion in The Garden and save me from Pharaoh and his doings and save me from those that do wrong"" - Qur'an, Chapter 66 At-Tahrim:Verse 11

Sura Al-Fajr, verse 10 refers to The Pharaoh of the nails or stakes:

"And with Pharaoh, owner of the stakes?"

In the works of Josephus, the princess who saved Moses from The Nile is called "Thermuthis".

Bithiah is often portrayed as being the sister or wife of Pharaoh in adaptations of the story, in order to have Moses appear as Pharaoh's son.

In the 1956 American film The Ten Commandments, she is portrayed by Nina Foch as the daughter of Ramesses I and the sister of the Egyptian Pharaoh Seti I, who raised Moses as her own son as her husband had died before they could have children. When Moses leads the Hebrews out of Egypt, she joins The Exodus. In the film, Bithiah is shown as a compassionate and heroic woman, who deeply loved Moses as a mother and wanted him to inherit the throne so he could do good. When Moses is found out to be a Hebrew, the heartbroken Seti I, with urging from Rameses II, orders her not to see him again. During the first Passover, when The Destroyer is killing the firstborn of Egypt, she is freed from a fairly luxurious form of house arrest and takes part in the very first Passover Seder. She grieves over the suffering of her people, but casts her lot with the people of Israel and joins The Exodus, where she willingly and gladly gives up her place on her rich litter to help the weaker Israelites. When the Egyptian chariots attack, she tries to interpose herself between the charging army and the Israelites, with her future husband Mered dissuading her from the noble yet suicidal act. When the Egyptian army drowns in The Red Sea, it is her grief that the film shows rather than the biblical account of the singing and dancing of the people led by Miriam. Mered comforts her in her sorrow. A later scene has Bithiah among the few who refuses to participate in the mass worship of The Golden Calf and instead faithfully waiting for Moses's return with The Ten Commandments. In the film, up until this point, unlike in The Bible, Bithiah was shown to be an idol-worshiper.

In the 1998 Dreamworks animated film The Prince Of Egypt, Bithiah is named Queen Tuya, historically the consort of Seti I. She was voiced by Helen Mirren, with Linda Dee Shayne providing her singing voice.

The American novelist, H. B. Moore also listed as Heather B. Moore has published 3 novels centered on the life of Moses, under the group heading "The Moses Chronicles Volume 1: Bondage, Volume 2: Deliverance and Volume 3: Exodus. Bithiah appears as a central character and narrator in numerous chapters in the first and third volumes of this "Biblical drama." -

Bithiah's name in Hebrew form is commonly used as a female first name in contemporary Israel. 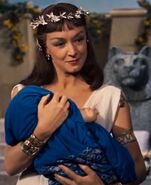 Bithiah in The Ten Commandments (1956)

Bithiah in The Ten Commandments (2007)

Bithiah in The Ten Commandments (2006) 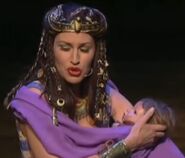 Bithiah in The Ten Commandments: The Musical 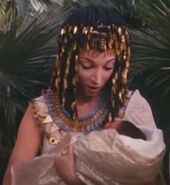 Bithiah in Moses: The Lawgiver

Bithiah in Testament: The Bible In Animation 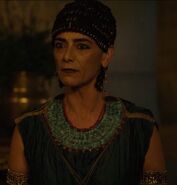 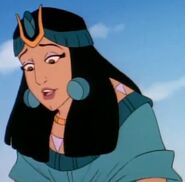 Batyah in Animated Stories From The Bible

Batyah in The Bible
Add a photo to this gallery
Retrieved from "https://hero.fandom.com/wiki/Bithiah?oldid=1829890"
Community content is available under CC-BY-SA unless otherwise noted.