The Order of the Black Knights

Liberate Japan from the control of the Holy Britannian Empire

The Black Knights, known officially as The Order of the Black Knights, is the main protagonistic faction in the anime series Code Geass. They are a group of vigilante rebels formed by Zero (Lelouch vi Britannia) to combat the Holy Britannian Empire. Described by Zero as 'knights for justice', they differentiate themselves from other terrorist groups such as the Japan Liberation Front, who take hostages and kill civilians, though this may simply be a tactic to increase a public support and recruitment.

Most members are former Japanese, many of whom have defected from other insurgent groups, though many other peoples, even Britannians may be found among their ranks. Their logo is a Geass Sigil with a sword through it, the same logo used in the spinoff Nightmare of Nunnally, by the Geass Order. After the ratification of the Union States Charter, the Black Knights became the military force of the United Federation of Nations.

The origins of the Black Knights traces back to the Shinjuku Ghetto with Lelouch vi Britannia as the progenitor during the Skirmish in Shinjuku Ghetto where Lelouch coordinates the Shinjuku resistance group consisting of Kallen Kozuki, Kaname Ohgi, Naomi Inoue, Yoshitaka Minami, Kento Sugiyama, Shinichirō Tamaki, and Toru Yoshida, in engaging the Britannian military with the result of the death of Clovis la Britannia. After the death of Clovis, Cornelia li Britannia and Euphemia li Britannia becomes the new Viceroy and Sub-Viceroy of Japan. The Japanese Liberation Front Hotel Incident was the public debut of the Black Knights where Zero introduces the Black Knights to the world as an organization that protects those without power from those who have it. Though Lelouch reorganizes the Black Knights to form a structured hierarchy and chain of command, the Black Knights rely heavily on his masterful strategies, unable to act effectively when he has not given them specific orders. The Black Knights have gained popular support amongst the Japanese population with more members joining in ranks.

The Battle of Narita was the first major battle for the newly formed Black Knights. Recognized for their success, Taizō Kirihara and the Kyōto House has decided to sponsor the Black Knights with personal and financial support. All other resistance groups in Japan, including the Japan Liberation Front, has joined the Black Knights. Under Lelouch's leadership, the Black Knights grow in strength exponentially, becoming a force rivaling the Britannian army. The Special Administrative Zone Massacre was the turning point for Lelouch and the Black Knights with Lelouch declaring the formation of the United States of Japan, a nation of acceptance and tolerance where any and all can seek refuge and openly declares war on Britannia with the Black Knights participating in the First Assault on Tokyo Settlement. During the battle, the group falls apart when Lelouch suddenly abandons them. In the process, both senior knights, Yoshida and Inoue, along with Kizuna Kagesaki, are killed. Several key members are arrested by Britannia, while others go into hiding.

Despite their defeat, some of the Black Knights are active during the period between. One of their activities was when they attacked Ashford Academy by committing robbery in Japan during the school festival. Peace Mark, which is a terrorist deployed organization, began making its move to continually resist Britannia for the period of time until their return. Terrorist movements have occurred in other Areas as well only to increase Britannia's reign.

After having his memories restored in the second season, Lelouch works back up to reorganize the Black Knights after the Battle of Babel Tower and to reform the United States of Japan to fight Britannia. He has successfully rescued the key veteran members and arranges the exile of the Black Knights from Japan for this purpose, making their new base of operations on an artificial island known as Horai Island (where the Black Knights located, including Benio Akagi and Kagari Savitri) off the coast of China. From there, he starts by returning control of the Chinese Federation to its Empress, making them his first ally to form a larger alliance to combat Britannia.

With the dissolution of the Chinese Federation and formation of the United Federation of Nations, the Black Knights were contracted to serve as its primary military force as well a protector of all U.F.N. member states, in exchange for their continued funding, manpower, and support for the organization. The Black Knights have swelled in ranks with Li Xingke, the leader of the Chinese Federation coup de'tat forces, and military forces from the Europia United, forming a military force that rivals to that of Britannia.

The UFN openly declares war on Britannia with the Black Knights participating in the retaking the member nation, United States of Japan, from Britannia's grasp, thus entering into a world war. Despite its massive military power, the Black Knights and the Britannian military are locked in a military stalemate with both sides gaining and losing grounds in each front with only Japan as the tipping point.

After the second battle of Tokyo, a Britannian envoy carrying Schneizel el Britannia lands on the Black Knights' flagship - Ikaruga (appeared by Mutuski Minase, Ichijiku Hinata and Ayame Futaba). In a meeting with a majority of the Black Knights' core members, Schneizel reveals Zero's true identity and Geass as well as insinuating that Lelouch has used his Geass to make them nothing more than his pawns. This, along with Villetta and Ohgi's testimony further drives a wedge among the Black Knights. Following Ohgi's suggestion, the Black Knights decided to betray Lelouch in exchange for the liberation of Japan. Diethard convinces the others to announce that Zero died of injuries sustained in battle, as no one would believe the truth and they would be stripped of their positions if they tried to explain it. Kallen later takes the role temporarily.

Ohgi is forced to reveal the truth to Kaguya and Xingke when Lelouch causes a rebellion within the Emperor's forces. A month later, the Black Knights are stunned when Lelouch takes the Britannian throne for himself. After Lelouch conquered Japan and took the UFN leaders hostage, they allied themselves with Schneizel's forces to oppose Lelouch.

After the Black Knights were defeated by Lelouch, Suzaku took up the mantle of Zero. He proceeded to kill Lelouch in order to complete the Zero Requiem. Afterward, the Britannian military was dissolved after Britannia joined the UFN with Suzaku becoming the new leader of the new incarnation of the Black Knights to lead peace and justice.

During the Kowa era, the organization has undergone many changes, such as some of its founding members like Ohgi and Tamaki retiring or Kallen becoming a reserve member as she attends college. Following Britannia joining the UFN, the Black Knights have assimilated all of the military resources from Britannia.

On the other hand, many new people from all over the world are now part of ranks, including Cornelia li Britannia and other Britannian soldiers like Guilford, and Gino Weinberg. Though Cornelia could qualify for the rank of General, she is only been given the position as a Lieutenant General due to the concerns of some that giving the Britannian Royal Family too much power could lead to another crisis. Also, due to Zero's own concern about consolidating too much power in one group such as the Black Knights, he wishes for separate organizations like the Glinda Knights (appeared by Oldrin Zevon, Lyre, Leonhardt Steiner, Marika Soresi, Sokkia Sherpa, Tink Lockhart, Nonette Enneagram, Oiaguro Zevon, Toto Thompson and other operators) to act as a check-and-balance against the influence of the Black Knights.

The Black Knights were originally funded by a small group of Japanese businessmen called the Kyoto House who secretly work against Britannian rule.

In the second season, they begin negotiations with the Chinese Federation, who grant them Penglai Island and now serve as the contracted military force for the United Federation of Nations, who are funding their operations. Officially they are not affiliated with any nations, but a majority of their equipment and members derive from the United States of Japan and the United States of China. 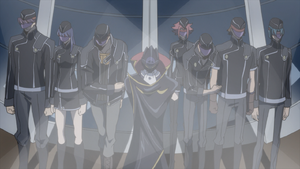 Zero and The Black Knights 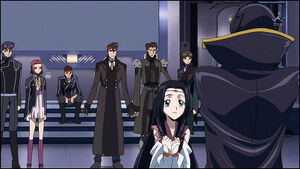 Members of The Black Knights 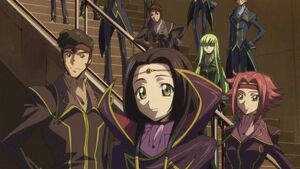 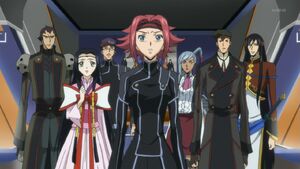 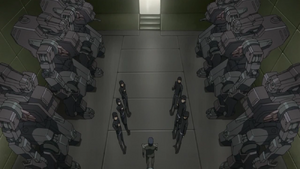 The remnants of The Black Knights. 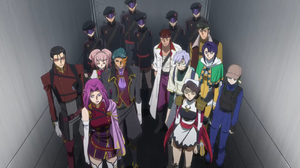 The great army of The Black Knights 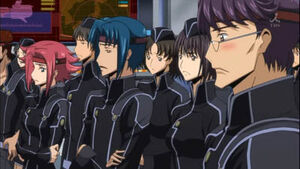 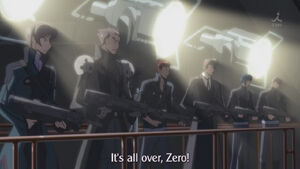 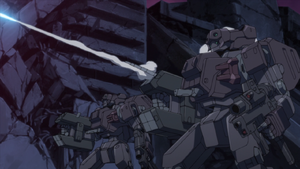 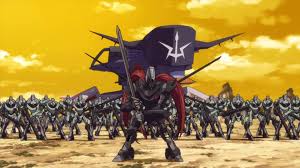 The Black Knights prepared for war 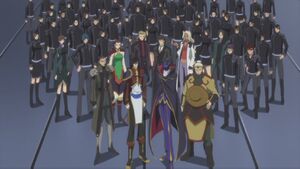 The Black Knights after the restructure.