Black Lightning (real name Jefferson Michael "Jeff" Pierce) is a fictional character from the DC comics, and a superhero with the ability to generate and control lightning.

Originally he was a high school principal and Olympic-level athlete who became a vigilante to take down organized crime in Metropolis' Suicide Slum. Eventually he would become a member of Batman's team of Outsiders for many years, although he retired briefly to become secretary of education underneath president Lex Luthor. Returning to crime-fighting, he has also been a member of the Justice League. His two daughters operate as the super-heroes Thunder and Lightning.

The character appears in animated films, television series, arcade and video games as well as other DC-related merchandise. Jefferson Pierce is portrayed by Cress Williams in the CW Arrowverse television series Black Lightning.

Black Lightning is Jefferson Pierce, who grew up in a slum in Metropolis, made good as an athlete, and returned to his old neighborhood to teach at the high school and help the next generation make something of themselves. (Some stories replace Metropolis with Cleveland, OH, the home of both Isabella and the creators of Metropolis, Siegel and Shuster). Finding the neighborhood in the grip of organized crime, he became a costumed superhero equipped with a belt that gave him electrical powers. Later in his career, as so often happens, he developed the ability to manifest the powers without the belt.

In DC's 2011 reboot of its continuity, The New 52, Black Lightning comes into conflict with Blue Devil, over their confrontation of Tobias Whale's crime wave. He later made an appearance as a possible recruit for the Justice League.

Jefferson Michael "Jeff" Pierce was born in 1957-1958, he is the son of Alvin and Leona Pierce, and the sister to Connie Pierce, and he grew up in the Suicide Slum of Metropolis. When Alvin was accidently shot during a mob hit, leaving Leona to raise her children alone until Peter Gambi, an Italian tailor, assisted her with the family's financial difficulties. Jefferson would go on to push himself in athletics, managing to make it to the Olympic Games at one point, gaining media attention for rising out of the Suicide Slum. Pierce wanted to send a message to everyone in the slum that they could rise of the neighborhood, which also put more attention on the slum for the rest of the world. In addition, Jefferson held a great aptitude in English, becoming a skilled writer and poet in his own right. After receiving scholarships and winning medals, Pierce went off to college where he majored in English and also earned a teaching degree.

When returning to Metropolis, Jefferson noticed that the Suicide Slam hadn't changed despite his attempts, and he decided it was time to make a difference. Going back to Garfield High School, Jefferson made an impression when he kicked a drug pusher and humiliated three criminals who were with the 100. When one of the gunmen killed a student of Pierce's, Jefferson related this to Peter, who advised him to fight back and gave him a costume. Taking on the name "Black Lightning", he equipped himself with a force-field belt, and put on a stereotypical perception of African-Americans for the time to keep his alter ego a secret. Defeating criminals and villains such as his archenemy Tobias Whale and Merlyn the Archer, Black Lightning gained the attention of Superman, Jimmy Olsen, and inspector Bill Henderson.

During his heroics, Peter saved Jefferson from a bullet meant for him, which caused Pierce to generate lightning from his hands, thus allowing him to manipulate electricity without the need of his belt via internalization. Pierce would go on to learn that Peter's act was for redemption, as he was the one who killed Jefferson's father all those years ago. Afterward, Pierce would continue to act as a vigilante while working at Garfield High, but Lynn would learn of his secret when becoming a teacher there. Black Lightning would go on to become an ally to the vigilante Batman, as they investigated the abductions of students, most notably Dick Grayson. The two would meet Superman, Black Canary and Green Arrow, with the latter becoming a good friend towards Pierce.

Green Arrow then tried to nominate Black Lightning to become a member of the Justice League, but Pierce declined Superman's offer, which was respected by the team. Jefferson then assisted Superman in solving the murder of Trina Shelton, and learned that Trina was shot by a stray bullet when Black Lightning was fighting criminals. This temporarily caused him to lose his electric powers due to shock and grief, and he decided to take a break from heroics. However, he returned when Batman asked for his assistance to save Lucius Fox from Markovia. After assisting Batman in defeating Baron Bedlam, Black Lightning became a member of the Outsiders under the Dark Knight's leadership.

Originally, he was described as having no innate powers, using a belt that allowed him to generate a force field and project electrical bolts. This power was later revealed to exist as a result of the Metagene, according to Invasion! #3.

According to Black Lightning: Year One, Jefferson Pierce is, in current continuity, a metahuman born with the ability to generate and magnify externally-localized electro-magnetic phenomena, by manipulating intense bio-electric fields generated from his body. This is a power that he internalized and kept hidden for much of the early part of his adult life. Exactly how much electrical energy Black Lightning can generate is unknown, but he can easily stun or kill a man with his internal powers, and on one occasion, he was able to restart Superman's heart after the Man of Steel had suffered from a near-fatal Kryptonite exposure. He can also generate a powerful electro-magnetic force field capable of stopping projectiles, however, this act requires considerable effort and concentration. He has demonstrated the ability to create an electro-magnetic repulsion field which grants him limited-flight capabilities. 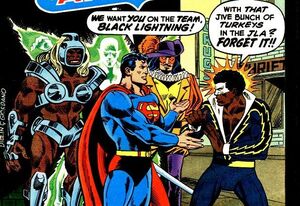 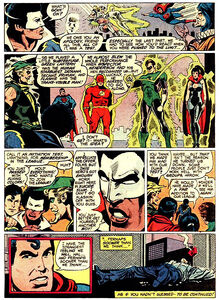 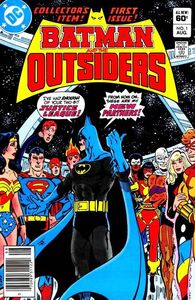 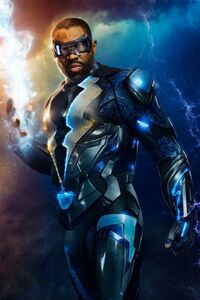 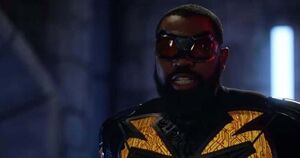 Black Lightning in the CW series, The Flash. 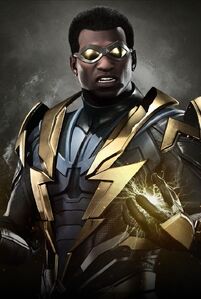