Black Magician Girl first appears as a character in the Battle City Arc when Yugi faces the ex-magician Pandora, whom she defeats by drawing power from both duelists' Black Magician cards. One of Yugi's most expressive monsters, she also appears in the duel between Yugi Muto and Ryo Bakura, and is seen crying when she was forced to attack by the effect of Bakura's Dark Spirit of the Silent, which caused her owner to be damaged by Dark Sanctuary's effect (implying that she actually knew that she was chosen by the effect and what would happen).

Her character was shown much more clearly during the Waking the Dragons arc. She brought Yugi and Dark Yugi to the World of Duel Monsters to revive the Sacred Dragon Timaeus to help them to fight Doma. She did the same with Kaiba and Jonouchi who gained the dragons, Critias and Hermos.

When Dartz summoned the The Great Leviathan, Black Magician Girl opened a portal to the Duel Monster world, and led an attack against the Leviathan with Yugi, Kaiba and Jonouchi. After the evil beasts is defeated, she and the Legendary Knights help all the stolen souls from the Seal of Orichalcos to returning back to their body and thanking Yugi and Yami as both the real world and Monster World is saved.

In the Dawn of the Duel arc, Black Magician Girl is the Ka monster of Mana. After Mahado died and became the "Black Magician", Mana promised herself that she would become a great magician, following after her teacher.

In Yu-Gi-Oh! GX, Black Magician Girl appears as a Duel Spirit during the Duel Festival towards whom Sho Marufuji harbors feelings for. On the one day Duel Spirits can take physical form, the Black Magician Girl surfaces during a school-wide festival to duel with Judai. Nobody thought that she was the real Black Magician Girl considering the fact that everyone was in Duel Monsters costumes. The crowd cheered actively for her, and even though she lost, she did not care because she had so much fun. Before the day ended, she used the last of her energy to give Sho a kiss on the cheek and then she went back into her card.

When Black Magician Girl was summoned by the effect of "Bond Between Teacher and Student", she acts very childish and became worried when she saw Paradox's monsters. Black Magician encourages her that victory can be assured when they join forces with their master. 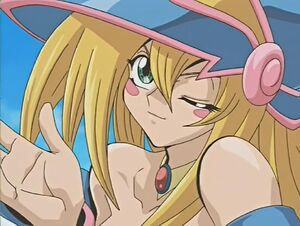 Retrieved from "https://hero.fandom.com/wiki/Black_Magician_Girl?oldid=1678982"
Community content is available under CC-BY-SA unless otherwise noted.