Template:Infobox Black Widow aka "Natalia "Natasha" Romanova" is a fictional character in the Marvel Comics Universe.

Black Widow was trained from a young age to be a Soviet spy and secret agent with no equal. She was, along with fellow future Avenger Hawkeye, an early antagonist of Iron Man due to the Soviets desiring his technology. Like Hawkeye however, Black Widow defected to the United States and since then has become a freelance agent who acts largely in their interests, though she has also long been associated with both the Avengers and the world-wide peace-keeping organization SHIELD.

Widow's past is one that she often struggles to remember in detail, and there is some evidence to suggest that it may in fact be a lie. This is supported by the fact that she has been shown to be not the only Black Widow but rather one of many. Another Black Widow, Yelena Belova, is a recurring enemy of Natasha.

Black Widow recently lost her memories of her associate, mentor, and lover Bucky Barnes, and has yet to get them back.

The Black Widow is a world class athlete, gymnast, acrobat, aerialist capable of numerous complex maneuvers and feats, expert martial artist markswoman, and weapons specialist as well as having extensive espionage training. She is also an accomplished ballerina.

Widow's list of known fighting disciplines includes karate, judo, ninjutsu, aikido, savate, various styles of kung fu, and boxing, and she has had training from Winter Soldier and Wolverine in addition to the Soviets. This makes her a versatile fighter, though she is not without her limits; Diamondback has held her own against her and both Daredevil and Winter Soldier soundly defeated her. Nevertheless, she is a capable fighter, holding her own against fellow Black Widow Yelena Belova and defeating Clint Barton as Ronin.

Natasha has received the Red Room's variant of the Super-Soldier Serum. As a result, her physical and mental abilities had been enhanced slightly beyond human limits. Due to this serum, the white blood cells in her body are efficient enough to fight off any microbe, foreign body and others from her body, keeping her healthy and immune to most, if not all infections, diseases and disorders. Also, it takes quite a bit for Natasha to become intoxicated.

Her agility is greater than that of an Olympic gold medalist. She can coordinate her body with balance, flexibility, and dexterity easily. Natasha's reaction time is similarly enhanced and functions with the peak of human efficiency and capability, bordering on superhuman level. It is possible for Natasha to dodge a bullet even at point blank range. 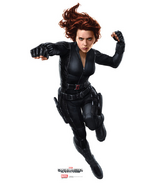 Black Widow in Captain America: The Winter Soldier
Add a photo to this gallery
Retrieved from "https://hero.fandom.com/wiki/Black_Widow_(Natalia_Romanova)?oldid=348216"
Community content is available under CC-BY-SA unless otherwise noted.