Heroes Wiki
Register
Don't have an account?
Sign In
Advertisement
in: Female, Antagonists, In Love,
and 29 more

Defeat Maximals (formerly and gave up).

Defeat Megatron to save her own existence.

Blackarachnia is a former Predacon turned Maximal after falling in love with Silverbolt.

She is voiced by Venus Terzo who also voiced Jean Grey in X-Men: Evolution.

For Black Arachnia as a villainess, see Blackarachnia.

At the end of season 2, Blackarachnia began to show sign of defection for her own survival. After confirming the location of the Ark, Megatron sent Waspinator to its location. Realizing what this meant, Blackarachnia abandoned her post and followed him. Silverbolt followed her and stubbornly refused to leave her alone. Exhausted and in a hurry, she conceded and told him to dig. The two broke through the mountainside and Blackarachnia had a good cackle over the Ark's power being "all mine!" — just as Megatron arrived. Having always intended for her to reach the Ark as he knew she had the access codes, he threatened to vape Silverbolt unless she did what he said. Bitterly, she agreed to his demands.

Blackarachnia used the Ark's security system to cover Megatron's back, not sure of what he was planning. Once he fired upon Optimus Prime, history began to change, wiping out all Maximals... The Agenda (Part III)which included herself. Not willing to die for Megatron, she activated Teletraan I's security nets to force Megatron off the ship. With Silverbolt's help, she got the dying Autobot leader under life support and began the repairs. The Maximals, recognizing what she had done, reluctantly allowed her to join their ranks after an irate Megatron gave her the boot (in the form of nearly killing her). Optimal Situation (Quite what she'd intended to do with the Ark — since she couldn't have altered the timeline without risking erasing herself — was never explored.) TM2 Blackarachnia

Later, Blackarachnia took the Transmetal driver and attempted to use it on herself. Silverbolt, not realizing what she was planning, bailed her out of the contraption. Like every good girlfriend, she began to chew him out, but was cut off as an energy surge made her lose control of her circuits. A security system Tarantulas installed had been triggered by her tampering with her core, and the only way to fix it was to cut the Predacon shell program loose. Reluctantly, she agreed. An attack on the Maximal base disrupted the attempt, and she was deactivated.

Distraught, Silverbolt took off to avenge her death. He easily subdued Tarantulas and was moments away from executing him when Rampage attacked him. Blackarachnia appeared in the nick of time with her new and improved Transmetal 2 body, easily fought off Rampage and rescued Silverbolt. Crossing the Rubicon

Later, during Megatron's final assault on the Ark, Blackarachnia "emasculated" Rattrap's tail in an effort to reactivate the Ark. Seriously. Then after Megatron's defeat and capture, Blackarachnia went back to the future with the remaining Maximals.

When the Autobot shuttle crashed on Cybertron and the Maximal team was gassed, Blackarachnia's Transmetal 2 powers were stripped away from her, as were her memories. As such, the amnesiac Maximal decided to head underground, distraught and confused. Locked out of her robot mode, she awaited her imminent deactivation- until the other three survivors: an equally disoriented Optimus Primal, Rattrap and Cheetor- plunged into her web. Primal made the decision to head underground, and Blackarachnia complied, using her webs to grant them safe passage. However, in her weakened state her webbing was limited, and so the foursome plummeted most of the way down into the chamber of the Oracle. She watched as Optimus emerged in his technorganic form, and was the fourth and last Maximal to be reformatted, emerging as a pink black widow spider with green markings. When attacked by a squadron of Cycle Drones, she put her technorganic mode to good use, trapping one of the Vehicons in a tangle of web. The Reformatting

However, her loss of Silverbolt had hardened her, and she was now unable to count on her Maximal allies. Blackarachnia fell back upon her Predacon principles of 'survival of the fittest' and became more withdrawn and skeptical than at the end of the Beast Wars. Blackarachnia had a relatively easy time adapting to her new technorganic form, and was the third Maximal to master transformation, though it took her longer to apply her new robot mode in combat. In robot mode, she was able to fire electrical "stings" through the ground and hurl technorganic webs like discs. However, all of her new abilities and powers were useless as she tried to unravel the mysteries of where and why the population of Cybertron had gone, and why the Cybertron InfoCore was wiped. Master of the House Sometime after that, she received a vision of prehistoric Earth and her lover. She and Rattrap were then sent to extract data on the Shuttle that ferried them home to Cybertron, before having a run-in with Megatron's new, sentient Vehicon generals. As she desperately tried to access her missing memories, Megatron manipulated the data link, going inside her body, controling her, and by doing so, finding the Maximal's base. Whens she realized what was going on, she severed the link at the cost of the Shuttle and their memories. Fires of the Past

Blackarachnia and crew later discovered the bat-creature Nightscream, who led them to a strange organic fruit tree. Upon eating the fruit, Blackarachnia began to revert to her instinctual "animal" mind, and it was only thanks to Cheetor that her feral mind returned to normal, and thanks to Primal that the bat's life was saved and reformatted into a technorganic body. With the debut of the newest Maximal, Blackarachnia took on a "big sister" role to the inexperienced youth, and as a result mellowed somewhat. Forbidden Fruit Later, the group stumbled across one of Megatron's many Transformer junkyards, where the lifeless, Sparkless bodies of the cities were disposed of. When Thrust and Blackarachnia were split up from the battle, a unofficial truce was made between the two uneasy sides, but when, Thrust saved her life and her Spark, having strange recollections of doing so before, her mind was set: He was Silverbolt, mutated and made evil by Megatron.

Blackarachnia made numerous peals for Thrust to realize his "true" Maximal nature, though Thrust seemed hesitant. This culminated in Thrust removing her Spark, as Jetstorm egged him on. As the Spark rocketed into the darkness, Nightscream fought Jetstorm for it. At the same time, on another plane of existence, Blackarachnia encountered Primal, who calmed her astral spirit down, at the same time allowing Nightscream to restore it and bring her back.

When Tankor gained control of the Key to Vector Sigma and "infected" Nightscream and the new orchard with the Key, Blackarachnia eventually became infected, and temporarily lost her sanity as she was overwhelmed by the "technomatter". When the rest of the gang managed to reverse the process, Blackarachnia was saved, though her obsession with Thrust. However, not even Thrust's recent behaviour would put off the persistent Maximal. Using some of the organic fluid from the Cybertronian core, and after a brief chase. she trapped Thrust in some of her webs and forced his inner personality out, begging for Silverbolt to answer, and was horrified to discover Thrust was Waspinator.

When Jetstorm attacked, another mishap with the organic goop occured, and for a moment ... Silverbolt's true personality emerged, sweeping Blackarachnia in his arms. He returned, but just for a moment. Fighting a passionate Waspinator, the goo vanished from the both of them, and the Vehicon's minds both returned.Blackarachnia took place in the battle in Megatron's Citadel, holding off the Vehicons as Primal confronted Megatron within, though she, along with the others, were all overwhelmed by the Key to Vector Sigma and became comatose.

Upon awakening, the four headed to confront Primal in the Oracle, where they convinced him to return into real-space and continue his leadership.

After a brief run-in with the organic Transformer Savage/Noble his betrayal, and the introduction of the Grand Mal, Blackarachnia managed to force Jetstorm into a large pool of the organic goo, and his body began to change. Scanning a nearby condor skeleton, he awoke in a new form, a purple Desktoptechnorganic bird of prey. Blackarachnia was startled by the change in him. Instead of the lovable, chivalrous knight in shining armor, he was a brittle, haunted bot, tormented by the images of the evil deeds he had done — done by choice. Though he gave up on himself, she never did, urging Silverbolt to forgive his past, prompting him to head to the Grand Mal to confront his old master and rescue Primal and Cheetor. Even after Silverbolt spread a new, Megatron-enhanced version of the old Hate Plague causing dissention in the ranks, her love remained, unbroken and undying, though Silverbolt only felt more guilt on his part. However, Blackarachnia softened once more, and displayed traits similar to her pre-technoganic persona with the reintroduction of her lover. Together, the two battled an alien plant monster only to have it join the Maximals, fought two new Vehicons, and went up against strange zombies created by Megatron's depolarized Spark.

By the time the final conflict rolled around, Blackarachnia, like the others, was empowered by the Sparks of Cybertron, depleting the Vehicon ranks. However, like the others, she finally fell and her Spark was extracted once again, as Primal and Megatron fought their final battle, resulting in the sacrifice of the both and the reformatting of Cybertron into a technorganic paradise. Swatting away an angry bug, looking out over their new home, Silverbolt ruined the emotion with the corniest line possible. 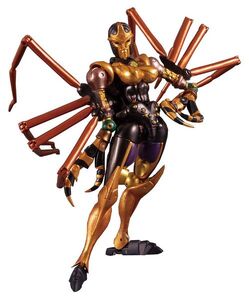 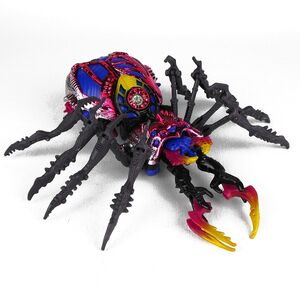 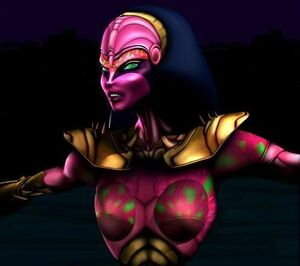 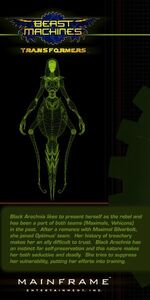 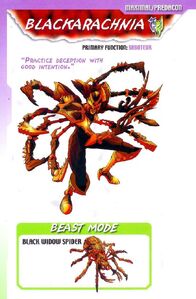 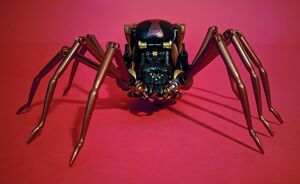 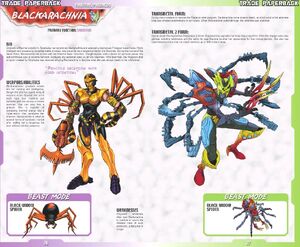