Hunt and kill all Vampires.

Blade (real name Eric Brooks), also known as the Daywalker, is a fictional comic book character, superhero, half-vampire hybrid and a vampire hunter of the Marvel Universe. He appears as the main protagonist of the titular comics, and a supporting character in other individual's comics.

Born Eric Brooks, he became a dhampir after the vampire Deacon Frost feasted on his mother while he was still in the womb. As a result, Brooks can walk into the daylight without being burning to death. He was eventually trained to fight the undead, and would later become an ally of many superheroes and monsters within the Marvel Universe. He is also a member of the Avengers and the Midnight Sons, where he protects the world from supernatural and otherworldly threats.

Since his debut in the comics, Blade has appeared in numerous media, such as in his own titular films, tv series, and video games. He was portrayed by Wesley Snipes in the Blade trilogy, Sticky Fingaz in live-action tv series, and by Mahershala Ali in the Marvel Cinematic Universe.

He was created by Marv Wolfman, and the late Gene Colan, and first appearing in Tomb of Dracula #10 in July of 1973.

Eric Brooks became half-vampire after Deacon Frost feasted on his mother while he was still in the womb, allowing him to become a dhampir. After being trained by Jamal, Brooks took the title of "Blade" and decided to hunt down vampires to avenge his mothers death. Blade would later stop other supernatural threats with the aid of Quincy Harker, The Mighty Avengers, the X-Men, and The Midnight Sons.

Though Blade is crusading against forces that are a threat to humanity, he is also a loner by nature and does not take orders well. For this reason and also the nature of the foes he fights he often operates outside society, and rarely interacts with other superheroes.

Eric Brooks, the man later known as Blade, was born in 1929 in Soho, London, England, United Kingdom. His father, Lucas Cross, a member of the secret society the Order of Tyrana, sent his pregnant wife Tara to England before he was taken prisoner in Latveria. There she took the name Vanessa Brooks and found shelter with brothel owner Madame Vanity, another member of the Order of Tyrana. Experiencing labor complications, Tara was forced to seek a doctor's assistance.

The doctor, Deacon Frost, was actually a vampire and feasted on the woman as she gave birth, passing on a series of enzymes that altered her baby. The enzymes entered the infant's bloodstream, transforming him into a Dhampir - a being tainted by a vampire's kiss, but not converted. In other words half-man, half-vampire. Frost was driven away before he could slay the child, but Tara perished, leaving the orphaned Eric Brooks to be raised at Madame Vanity's brothel. Eric would met and be fostered by veteran vampire hunter Jamal Afari, who would teach the boy how to hunt and kill vampires.

Wanting revenge for his mother's death, he would take the mantle of Blade after his sharp weapons. Blade would separate from Afari after Jamal willingly took the fall for murder when Blade killed man, whom he believed was a vampire. After stalking the night for vampires, Blade became a part of a small band who were hunting Dracula - Musenda, Orji, Ogun, and Azu.

Blade went to Dracula and told him he represented a group of men who believed that vampires would rule the world, and would offer his and his associates assistance to carry on Dracula's bidding during the daytime. Dracula went with Blade to meet his associates, but realized it was a trap set to kill him. The group nearly succeeded in destroying Dracula, but he was soon resurrected by his servants, and exacted revenge by murdering the band (except for Blade and Musenda).

In 1972, the murder of a bat-like monster in New York got Blade's attention, and discovered Kaluu when looking for the corpse in a morgue. Blade attacked Kaluu (thinking he was vampire), but stopped when detective James Lucas, Constance Molina and Adam Brashear, realizing he was among allies. The group started investigating the murder when the Bear appeared, and presented herself as the killer of that creature, due to self-defense. The Bear explained that she was a result of a failed attempt of the Deathwalkers to extinguish humanity in 1908, and that they would try to do it again. With the mystery solved, the group formed the Mighty Avengers, and went to find the Deathwalkers. The team disbanded after stopping the Deathwalkers, and Blade recovered the Talisman of Kamar-Taj.

Blade as he appeared in early comics. 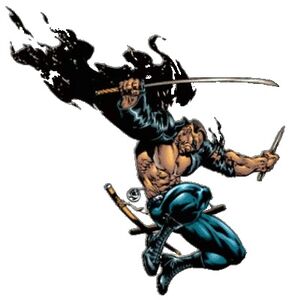 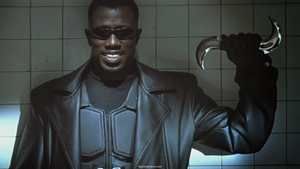 Blade as he appears in the Live-Action movie interpreted by Wesley Snipes.

Blade in the Spider-Man animated series. 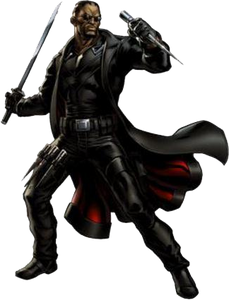 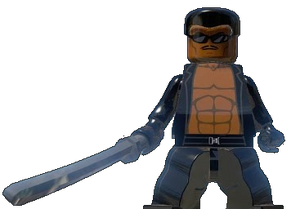 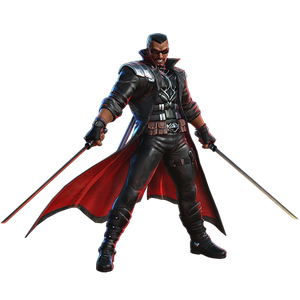 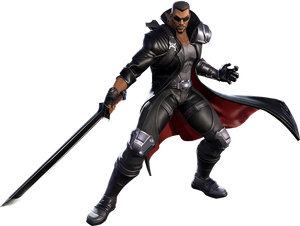