One of Ruber's minions (formerly)

Aid Kayley and her friends.

Ruber and his minions

Mutated Chicken
Bladebeak a supporting character of Quest for Camelot.  He was a chicken that was transformed into a chicken with an axe.

He is voiced by Jaleel White, who is best known as Steve Urkel and also voiced Sonic the Hedgehog.

Bladebeak is a chicken who lives in the hen house of Lady Juliana and her daughter Kayley. He has a wife named Henrietta, rather authoritarian with him, but that really has a great love. When Baron Ruber and his men invade the home of Lady Juliana, Bladebeak is used by him as a guinea pig to test the potion capable of merging the living beings with weapons, and it is the first member of his army to become a monstrous but comedic being with an axe in place of the beak. This transformation also provides him with the ability to speak.

Bladebeak is used as an informer or spy for Ruber, which, however, treats him with contempt and humiliates him (though to a lesser degree, than the Griffin his right arm). Gradually Bladebeak realizes, however, of the folly of his master, and retraces his steps helping Lady Juliana and Kayley (for example defending Juliana from one of Ruber's army members who wanted to kill her).

At the end of the film when Ruber dies consumed by the positive energy of Excalibur, Bladebeak, along with the rest of the army, returns to its original shape and returned to live in the hen house along with Henrietta.

Bladebeak is originally a chicken who lives on the farm until Ruber fused him with an axe, and he joins forces with him and later assists Kayley. During the climax, he stands up to one of Ruber's minions by saying: "You've got to ask yourself. Do I feel clucky? Well, do ya... punk?" before attacking him. In the end, he turns back into a chicken. 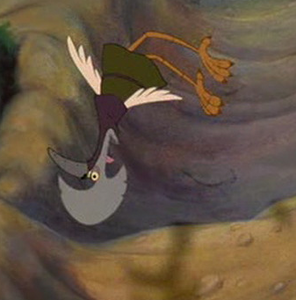 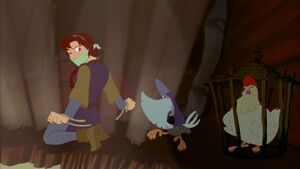 Bladebeak cutting loose of Kayley's bonds to free her from Ruber 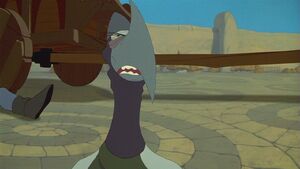 "You've got to ask yourself. Do I feel clucky? Well, do ya... punk?" Bladebeak standing up to one of Ruber's minions 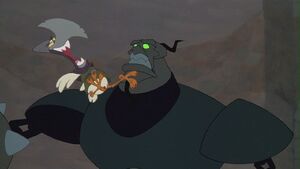