Protect and save Remnant and her friends.
Right the wrongs of her past.
Take back to White Fang.
Convince Ilia to leave the White Fang. (succeeded)

Blake Belladonna is one of the main titular protagonists of the American animated webseries RWBY. Her weapon of choice is a Variant Ballistic Chain Scythe (VBCS) dubbed Gambol Shroud.

She is voiced by Arryn Zech.

Blake is a fair skinned young girl with amber eyes and long black hair. A ribbon is tied with a large bow on the top of her head, which acts as a cover for her Faunus heritage and disguises her black cat ears. She wears purple eyeshadow in catseye style.

She wears a black buttoned vest with coattails and a single silver button on the front. Underneath this is a white, sleeveless, high necked, crop undershirt and white shorts with a zipper on the front of each leg, emblazoned with the YKK logo of the real life Japanese zipper manufacturer.

She also wears black low-heeled boots and full stockings with a color gradation of black to purple at her ankles. Her emblem is visible on the outside of both thighs just below her shorts in white. On her left arm is a detached sleeve with a silver cuff around her bicep, and black ribbons are wrapped around both forearms. A small, loose scarf is wrapped around her neck and a gray magnetic backpack is strapped to her back, hidden by her hair.

Blake's pajamas consist of a black, long-sleeved, yukata-style shirt with white edging over a purple undershirt, and a matching skirt. A black obi is wrapped around her waist and tied with a black and white string. She wears her bow while sleeping.

During the events of "A Minor Hiccup" and "Painting the Town...", Blake wears an alternate outfit codenamed "Intruder".

This outfit consists of a white, v-neck, zip-up crop shirt with a black hem and three quarter sleeves. Her emblem is printed in off-white on the left side of the shirt. She wears black pants that have a vertical gray stripe on the outer side of each leg and a black belt.

Attached to the rear of the belt is a black piece of fabric that covers her from hip to hip. Underneath this is a longer, translucent, purple piece of fabric. She also wears black high-heel boots with two straps and buckles and purple undersoles, reaching to mid-calf. She retains the black ribbons on her forearms and her black bow.

During the Beacon Dance, Blake wears a short, purple, asymmetrical, halter neck dress that is split up the right side and has a black collar. Translucent black mesh covers her shoulders, decolletage and back, and decorative black swirls cover the left side of the dress and continue up the left strap. The outfit is completed with black pumps and she wears a teal bow as opposed to her usual black one.

After the timeskip following the Fall of Beacon, her new design features a long white coat with dark gray lining and a sleeveless black crop top. The crop top has rectangular and diamond shaped cutouts around the neckline. Additionally, she wears a white belt over black fitted pants. After the confrontation with Adam in "Heroes and Monsters", Blake has been left with a scar on her left abdomen.

Across her torso is a diagonal strap that contains a smaller magnetic clip used to sheathe Gambol Shroud. She wears thigh-high black heeled boots with gold-colored edging around the top. The left boot has a belt wrapped twice around the thigh. Each boot bears her belladonna emblem in white on the outer side of the thigh, and a white pouch is attached to the back of her belt.

In "Of Runaways and Stowaways", Blake removes her bow and throws it into the ocean.

In "The Lady in the Shoe", Blake's coat is slashed off by Adam

Blake is described as being "mellow" by her voice actress, Arryn Zech. She displays a cool, reserved, and serious personality most of the time but does not lack a humorous side usually in the form of dry wit and sarcasm. Blake is a righteous person, respecting other people's lives regardless of whether they are Faunus. She strongly despises those who judge and discriminate based on racial prejudice. Blake is outspoken, going so far as to indirectly insult the Schnee Dust Company in front of its heiress and defend Faunus of any kind.

Blake is shown to be an introvert. Though she reads books to distance herself from the discussion at hand, as the series continues, she is shown to be more facetious and friendly. Blake appears most conversant when discussing the history and plight of her people.

As a Faunus, Blake has faced discrimination in the past and wears a bow when around Humans in order to be treated for her character and not her species. However, despite having no hate for Humans, she has seen how the real world works and wonders how she can undo so many years of hate and pain.

Blake's past negatively influenced her personality, leading to stubbornness, sleep deprivation and trust issues at times; however, she has a strong sense of righteousness. As a member of the White Fang during its former, peaceful leadership, Blake strongly disagrees with the level of violence and hatred they exhibit toward Humans. She sees her Semblance as a prospect of her tendency to avoid conflict, especially when caused by the White Fang, but Sun persuades her to let her friends help her as much as she believes she is helping them. She uses this in turn to persuade Ilia to leave the White Fang and to confront Adam with others' help.

Blake's Cat-Faunus features also seem to give her other aspects of a cat, such as climbing up to Ruby's bed to stay away from Ruby and Yang's pet dog, Zwei. Another time, she is distracted by and instinctively decides to follow a laser pointer light to a waiting Yang in "Burning the Candle". She also has a great love for tuna, as shown in "Round One" where she drools over a bowl of noodles topped with tuna fish

Blake shows above-average agility, speed and endurance, as shown when fighting multiple enemies yet maintaining motion and energy without fatigue. She also exhibits a high level of skill when handling Gambol Shroud. She can slash away at opponents with startling speed and deflect incoming machine gun fire using just her blade.

Blake also possesses remarkable reflexes, able to dodge a near point-blank strike from Adam Taurus by using her Semblance.

As a Faunus, Blake possesses the ability of night vision, granting her the ability to see proficiently in the dark, as is shown after shooting out the power during the White Fang Faction Meeting, using the dark as a means for her and Sun to escape from Roman and the White Fang

There are three forms to Gambol Shroud. When sheathed, her weapon is able to slice opponents in two with its cleaver-like cover. However, when unsheathed, it becomes even deadlier, and Blake is able to use both the blade and sheath in tandem against her opponents. Blake is also capable of jumping large distances, leaping from building to building, and even on moving cars, as seen in "Painting the Town...".

She is also adept in using Gambol Shroud as a conduit for her Aura. Creating shockwave like attacks of varying intensities in conjunction with her swings, these attacks have been shown to be extremely effective and versatile as Blake has used them against Grimm, missiles, AK-130's and human opponents. Given that Adam demonstrates a red variant of this attack in the "Black" Trailer, it is possible she learned this technique from him.

She also appears to be able to freely and quickly change the way she grips her weapon. She can fold the blade into a gun-blade which is attached to an extending ribbon, similar to the Japanese kusarigama or sickle-and-chain. Her technique with this form of Gambol Shroud is similar to Ruby's with Crescent Rose: she uses the recoil from the gun attached to her blade to increase the speed of her attacks, and can slice multiple enemies with Gambol Shroud from the ground or in the air through a whirling attack.

Additionally, she uses the momentum of the weapon on the ribbon as an anchor to maneuver herself in midair, and she can grapple other opponents or objects from medium range to bring them into melee distance. She is quite accurate as well, for she is able to kill an Ursa with one strike during her meeting with Yang in the Emerald Forest. Though she is very talented at using Gambol Shroud offensively, it requires a lot of concentration, lowering her defensive capability and making her more susceptible to attacks overall. Blake uses her ribbon again in "Painting the Town..." to spin Yang around, which is part of Ruby's plan to distract and defeat Roman.

Because the sword portion of Gambol Shroud folds into a sickle, the end of the blade is double-edged, and she can use this double edge when it is in its sword form. This is seen in "Black and White" when she attempts to interrogate Roman by placing the back of the blade to his throat while pointing her gun toward the White Fang members to keep them at bay.

Blake's most remarkable quality is her Semblance, which allows her to create Shadow-clones. Blake can use hese clones to distract, shield or hide herself from the enemy for a brief amount of time, which is demonstrated during her fightwith Atlesian Knight-130s and again during her fight against Roman Torchwick.

Her first on-screen use of it is during the events of the "Black" Trailer when she utilized it against the Spider Droid. Blake's first recorded use of her "Shadow" ability in the series proper is during "Players and Pieces" when she fights the Nevermore. During the latter battle and others, she propels from her shadows, confirming there is some substance to her copies. In "Of Runaways and Stowaways", a clone exerts force on her, allowing her to reach greater heights.

It is unknown exactly how long a shadow copy can appear for or how far away from Blake they can exist. Though Blake usually uses them in her immediate area, she reaches rather far away from one she uses to trick Reese Chloris in a Vytal Festival Tournament match.

Blake uses Dust to give her clones additional abilities. Fire Clones are explosive, Earth Clones are more concrete defenses than normal clones, and Ice Clones are effective in trapping enemies, giving Blake the advantage in fights. 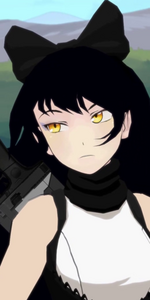 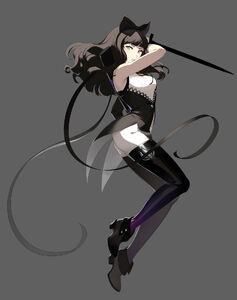 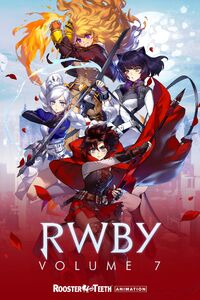 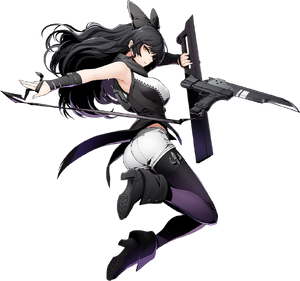 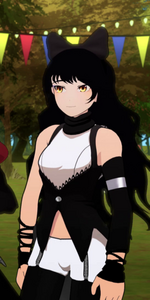 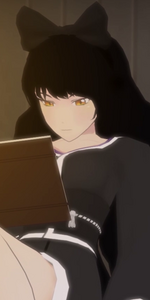 Blake in her night gown 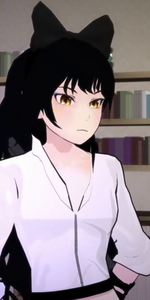 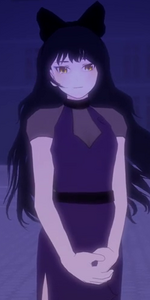 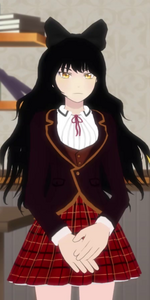 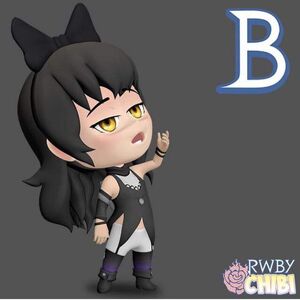 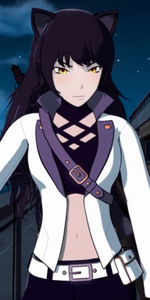 Blakes outfit for volumes 4, 5 and most of 6 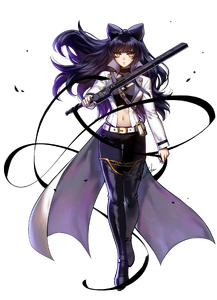 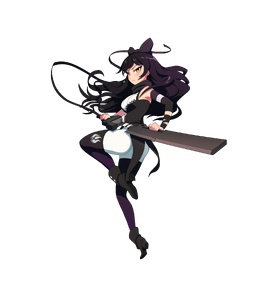 Blake as she appears in RWBY: Amity Arena. 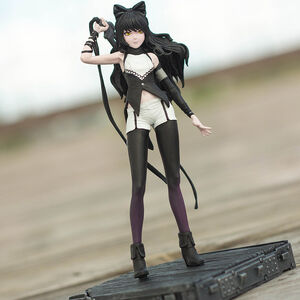 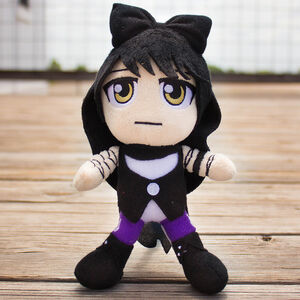 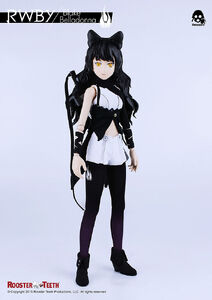 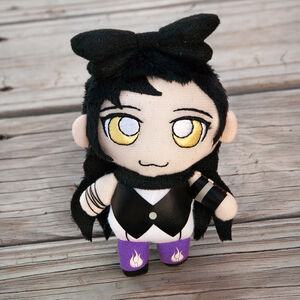 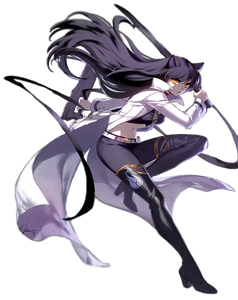 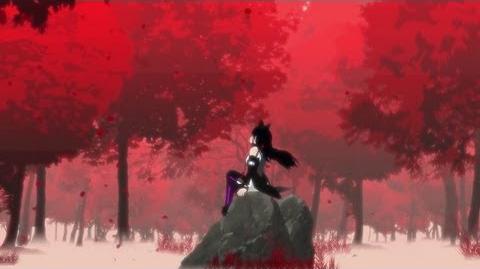 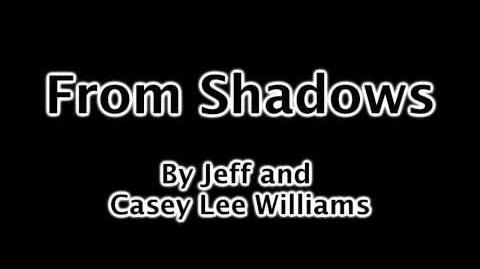 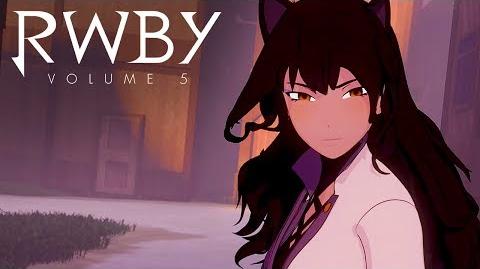 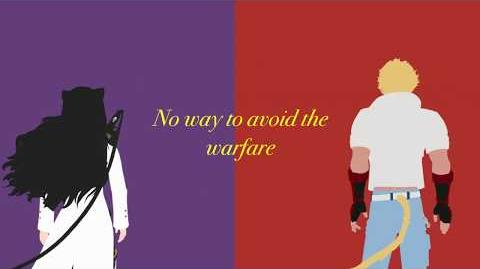 This Time (From Shadows Part II) (feat. Casey Lee Williams) by Jeff Williams with Lyrics
Add a photo to this gallery

Retrieved from "https://hero.fandom.com/wiki/Blake_Belladonna?oldid=1944015"
Community content is available under CC-BY-SA unless otherwise noted.