To eliminate Fata Morgana and save the whole universe from disaster

Artificial Intelligence (robot)
Resistance Pilot
Blaster Keaton is an iconic American character who appears in all but one of the Aero Fighters or Sonic Wings vertical scrolling shooter video game series. He is most recognizable in the cyborg body he wears subsequent to the original game. Keaton was formerly a soldier in the United States military who fought in Operation Desert Storm. Also of note is his younger brother, who takes over Keaton's mission and who is nearly identical to Blaster in appearance. In most video game appearances, Keaton is cheerful and excitable. He has fun on his missions but also loves to fight. He can also be a bit of a flirt, although without much success. Amazingly, he loves his boxy robot bodies and doesn't mind that his only organic part is his head. Keaton gets along well with almost everyone, even the difficult characters no one else likes. The appearance of Keaton's body differs from game to game; however, he is always shown with light brown hair, vivid blue eyes, and a long, straight nose. When his hair is shown, it is worn combed back and spiky.

Although he is one of the most entertaining characters in the later Sonic Wings games, in the original, Keaton is straight-laced and almost boring. He is focused and determined to complete his mission. Keaton wears his military uniform, including a camouflage jacket. In sole player mode, Keaton is supposedly killed when his aircraft collides with Pandora after the mid-point boss battle. His identical younger brother vows to take over for Blaster and presumably becomes the playable character for the rest of the game. Fortunately, Keaton's head is salvaged, and he returns as Mecha-Keaton in Sonic Wings 2. In cooperative mode, Keaton is partnered with Keith Bishop. Keaton is definitely the straight-man of the duo; his serious statements are often met with facetious remarks from the older Keith. After the boss battle, both men survive and attempt to land on an aircraft carrier. However, Keith loses control of his plane and they both crash, ending up bobbing in the ocean.

Keaton returns in Aero Fighters 2, resurrected as the cyborg Mecha-Keaton after his accident with Pandora in the previous game. Keaton's head is all that remains of his human body, and his right eye has been replaced with a mechanical device. His body is boxy and silver, apparently cobbled together by Kowful from various spare parts such as an arcade machine. Keaton's attitude is vastly different as well; instead of the solemn attitude he had in Aero Fighters, he now is something of a smart aleck.

Unfortunately, Keaton's robot body gives him problems at times, as demonstrated when he ejects his head after the final boss battle in single-player mode. His head ends up stranded on the moon, which seems to be a recurring problem for him.

In cooperative mode, Keaton can be paired with any of the other pilots:

Keaton appears in Aero Fighters 3 (known in Japan as Sonic Wings 3) with an upgraded body; instead of his silver, arcade-machine body from the previous installment, he is red and much more advanced. Most notable are the built-in weapons he now controls: the Keaton Drill on his left hand, sphere-shaped Keaton Hammer on his right, and the boosters on his back. Keaton's cheerful attitude remains the same, although he is more boastful of this body than his previous one.

In single-player mode, Keaton is more alert than many of the other pilots, figuring out that he is in a "fake world" where the enemy presumably the time-traveling Hildride has staged to the Second World War. After the final boss battle, he returns to headquarters where Kowful has prepared a humanoid body for him. Keaton changes into his new body, noting that a human body is ultimately better than a robot one. However, he discovers that Kowful has played a practical joke by giving Keaton's new body a giant drill in a sensitive area.

Keaton fights with the Blazers (Glen, Gill, and Glenda) in cooperative mode. They seem surprised at his appearance and aren't sure who he is at first. Keaton likes to boast that as a robot, he doesn't show the Blazers' human weaknesses; however, the trio of humans don't seem to envy his situation. After the final boss battle, Keaton's plane blows up, but he manages to escape by ejecting his head. The Blazers rescue him, but then their plane explodes too. Keaton also appears in several other characters' ending sequences.

Blaster Keaton returns in human form for the first time since Aero Fighters/Sonic Wings came. The player must first complete the game as human Keaton in order to unlock Mecha-Keaton. Keaton's appearance in both forms has received an upgrade in Special. In human form, he now wears a brown leather jacket with "Justice" written across the back, along with the letter K. His robot form has also gotten a few new touches such as an antennae and piping on his head which is taken from RX-78-2 Gundam. In two-player mode, Keaton is partnered with Captain Silver. Silver finds Keaton to be a bit impulsive and wild, but they do get along well. Keaton often calls Captain Silver "old man" once again like what you have red in the second installment.

Keaton appears only as Mecha-Keaton, not in human form. However, he does have an amusing special attack in which he blasts the enemy with pink hearts. To activate it, hit B to activate "Keaton's Fury," then enter the following code: up down up up A. Otherwise, his role in the two games is identical. 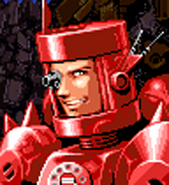 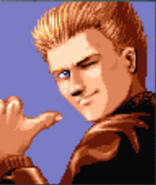 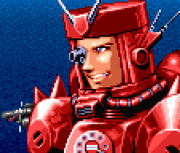 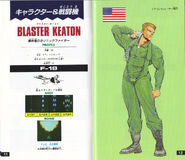 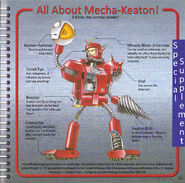 F-117 Blackhawk in both Aero Fighters 2 and Sonic Wings Special.

F4-U Corsair in both Aero Fighters 3 and Sonic Wings Special.
Community content is available under CC-BY-SA unless otherwise noted.
Advertisement