Serve Gary to the best of its abilities

Blastoise (known as Kamex in Japanese version) is a Water-type Pokémon from the first generation of Pokémon. It evolves from Wartortle at Level 36, after evolving from Squirtle at Level 16.

Blastoise is Gary's first Pokémon, having evolved from the Squirtle he received when he started his journey, and a hero from the Pokémon anime series.

Gary received Blastoise as his Starter Pokémon from Professor Oak back when it was just a Squirtle, bragging that it was the best Starter. Most of its battles were unknown, but it was known that Gary did use it in his fight against a Bug-type trainer named Samurai. Gary's Squirtle gave Samurai a spectacular battle, defeating his Metapod. As time went by, it evolved into a Wartortle and then a Blastoise. Gary used it in his match with Ash in the Silver Conference, sending it out to fight Ash's Heracross, and it demonstrated its power by blasting the Single Horn Pokémon through a rock with its Hydro Pump.

Blastoise then took on Ash's Muk, but reached a draw, with Blastoise countering the Sludge Pokémon's Sludge Bomb with its Rapid Spin, while its Skull Bash didn't bother Muk thanks to its sludgy body. Muk tried to envelop Blastoise, only to get blasted off with its Hydro Pump and Ash swapped Muk with his Bayleef, so as to use type advantage. However Blastoise wasn't deterred, using Rapid Spin to knock away Bayleef's Razor Leaf and then biting the Leaf Pokémon on her head leaf, before throwing her aside and knocking her out. Gary then recalled Blastoise until the end of the match, sending it out to fight Ash's Charizard. With the odds in its favor, Blastoise was quickly on the offensive, deflecting a Flamethrower and hitting Charizard with a Hydro Pump and a Skull Bash. The Flame Pokémon took to the air, but Blastoise held it off with Hydro Pumps, until Charizard began blasting the field with Flamethrower, melting the rocks and drastically increasing the heat.

Unable to move, Blastoise blasted the field with water to cool it down, sending up a huge cloud of steam, and Charizard took the opportunity to get in close and start grappling with Blastoise, making it unable to use its water cannons. The Shellfish Pokémon managed to dodge Charizard's Dragon Rage, but the Flame Pokémon prepared to use Seismic Toss, despite Blastoise biting it on the arm, and succeeded. Blastoise tried to get back to its feet, but finally gave up and fainted. After Gary decided to become a Pokémon researcher and start things fresh, he decided to bring only Blastoise with him. But before leaving, Blastoise aided in saving Pikachu from Team Rocket. Much later, during Gary's time in the Sinnoh region, he sent out Blastoise to help fight Pokémon Hunter J so as to protect a group of Shieldon. However Blastoise and Pikachu were overwhelmed by J's Drapion and Salamence.

Blastoise is a highly powerful Pokémon, having been Gary's first Pokémon. Its known moves are Hydro Pump, a powerful blast of water it fires out of the cannons on its shoulders, Skull Bash, a powerful charging headbutt, Water Gun, a stream of water fired from Blastoise's mouth, Bite, a vicious bite, Withdraw, where it pulls into its shell to avoid attacks, Rapid Spin, where it tucks into its shell and spins around fast, flying at the opponent, and Hydro Cannon, where it fires two concentrated orbs of water out of its cannons. 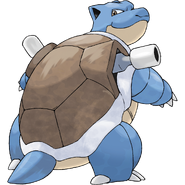 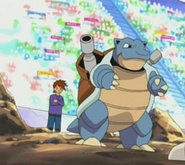 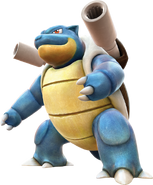