Noncorporeal
The Blind Specter is a boss and hero in the 2017 shoot 'em up Cuphead. He is the first of four bosses of the Phantom Express who can be found in the level "Railroad Wrath" within Inkwell Isle 3.

Despite being a boss, he is not evil, as he, along with the other members of the Phantom Express, are trying to protect their souls from falling into the hands of the Devil.

The Blind Specter is a light blue ghost with a long body and an empty eye socket (hence his name). He has two eyes poking out from the palms of his hands.

As with any stereotypical ghost, the Blind Specter likes to scare unsuspecting victims, as indicated by his intro.

He tends to speak slowly, as evidenced by his game over message, which also shows that he is obsessed with death, a trait he shares with the other members of the Phantom Express.

Despite his name, he is not blind, as he is well aware of Cuphead and Mugman's presence during the battle.

The Blind Specter is the first of four bosses that make up the Phantom Express.

In the Intro, the Blind Specter will emerge from the window of the caboose of the train and scare the brothers.

The Blind Specter only has one attack: he will begin launching eyeballs from his palms, which will bounce towards the brothers and damage them should they make contact. They can be destroyed by a well-aimed shot from any weapon.

However, the brothers must also watch out for pumpkins that drop pink ingots on the cart they are standing on, as the ingots will hit the right knob, causing it to push right, allowing the Blind Specter to hit the brothers more easily. These ingots can be parried to prevent this action from occurring.

Once defeated, the Blind Specter will scream in agony and retreat inside the caboose, allowing the brothers to proceed to the other three members of the Phantom Express: T-Bone, the Blaze Brothers, and the Head of the Train. Once these three are defeated, they will all sign their respective soul contract as though they are one entire entity.

The Blind Specter shooting eyeballs from his hands

The Blind Specter's defeat at the end of the First Phase 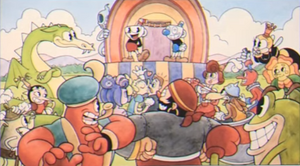 Retrieved from "https://hero.fandom.com/wiki/Blind_Specter?oldid=1940634"
Community content is available under CC-BY-SA unless otherwise noted.